The newest trend online is shaming mom shaming. Say that five times fast. Yes, that’s a thing, and rightfully so, because mom shaming sucks and you suck if you do it.

Seriously, who the fuck cares if Karen feeds her kids Goldfish crackers and lets them watch Caillou. Is she prying their eyes open “A Clockwork Orange”-style? No? Then it’s none of your damn business.

The same is true for most mom shaming.

Sure, there might be some advantages or disadvantages to one way or another, but most things really do come down to what works best for individual families and won’t make or break a child’s upbringing in and of itself. And, yes – sometimes dads get this, too.

But all comments are not mom shaming. Sometimes there is a good reason to step in and speak your mind when it comes to someone else’s parenting.

There are some areas that are frequently put under this umbrella that absolutely do not fit the bill. Sometimes, things are cut and dry, and commenting is not just appropriate, it’s important. 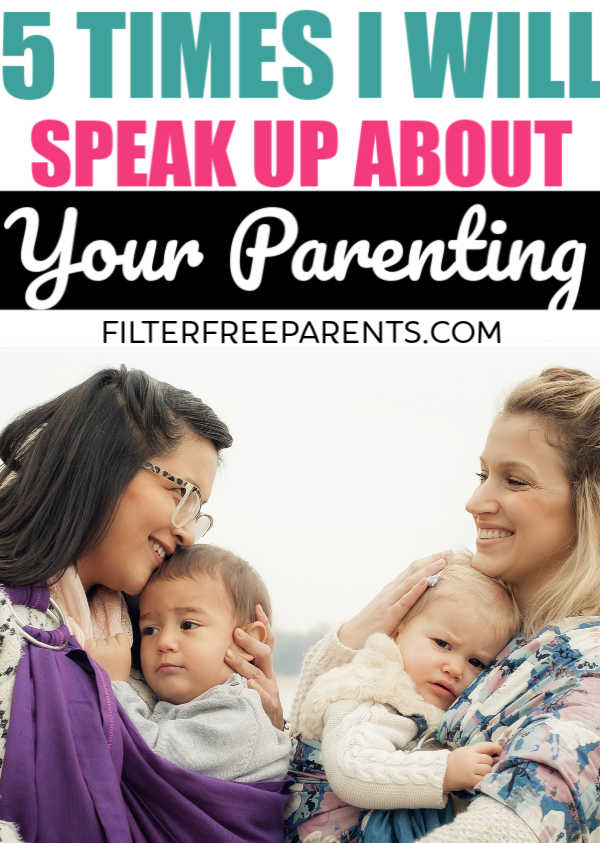 There is a right and a wrong way to use a car seat. Letting someone know that the chest clip is too low, the seat is improperly installed, it’s unsafe to wear a bulky coat in the car, or any other car seat safety issue, is not mommy shaming – it’s potentially life-saving.

Car seats follow the laws of physics, not parental opinion, or even the laws of the state/province/etc. A parent’s preferences when it comes to car seat safety mean very little.

Like all safety measures, recommendations change as we learn more and as safer products become available. They may even change between your children. What we do know from talking to scientists and first responders is that measures such as rear-facing past two, and other safety guidelines, are making for better outcomes in crashes.

If someone posts a picture of a child improperly restrained in the car, check the comments before dogpiling, but do say something politely, and non-judgmentally. If someone says it to you, be grateful you discovered the importance of it on Facebook instead of in a much more tragic way.

The same goes for seeing a child improperly retrained in the “real world.”

Vaccines are a public health issue, NOT a parenting choice.

Yes, vaccines. Unlike if you choose to breast or bottle feed your infant, people have a right to care whether or not you vaccinate your children. Why? Because it affects the health and safety of their own children.

When someone is upset that a parent isn’t vaccinating their child, that is not mommy shaming.

Sometimes this can be subjective, but if you see something that makes you suspect a child is being abused, sexually, physically, or emotionally, it isn’t mommy shaming to address it. It’s child advocacy.

Recently, there was a couple whose children were removed from their home because of videos they posted to YouTube of them clearly emotionally abusing their children. Comments on those videos were not shaming, they were protecting the children being harmed.

Stating that breastmilk has antibodies that are not found in formula is not shaming. Stating that everyone should at least try to breastfeed is mom shaming.

Stating that a study shows the effects of prolonged screen time on children include these things is not shaming. Implying that someone is a bad parent for allowing their one-year-old to watch TV, or taking on an air of superiority because your kids only watch TV for half an hour on the weekends is shaming.

Some parenting decisions are based in sexism, racism, homophobia, or other bigotry. Pointing out that someone, even a parent, is doing something that promotes intolerance or hate is not mom shaming. It’s being a good human being.

And it’s coming from a place where we really want to help.


Panicked Mom Gets Separated From Ba…

Teaching our kids about consent is one of the most valuable life lessons we can give them. It empowers them … Read More