Mom judgment. So prevalent. So pointless. We see it all the time—moms attacking other moms for doing something they don’t like. I’m a lawyer. I once worked for a judge, which makes me a lot more qualified to do some judgin’ than the average person.

But, that’s not my style. I believe in giving people the benefit of the doubt, minding my own business, and saving the judgment for the courtroom.

Here are six commonly criticized moms I refuse to judge.

1. The Mom Staring At Her Phone

You know the one. The mom who stares at her phone on the park bench while her children play. Or, the one who sits in her car and catches up on social media after a wild trip to the grocery store with her toddlers.

I see her and I’m not judging her. Why? First, because what she’s doing is none of my business. Like, literally zero of my business. Unless her children are setting the playground on fire with gasoline and matches while she scrolls Insta, then her being on her phone does not concern me at all.

Maybe she works from home so that she can spend more time with her children and is being productive while they play and get some fresh air.

Maybe she’s texting her partner to find out when they’ll be home for dinner or asking if they could pick up a prescription from Walgreens along the way. Maybe she’s paying bills. Maybe she’s e-signing a treaty that would grant world peace.

Or, maybe she’s just taking a few indulgent minutes for herself. Regardless of what she’s doing, what business is it of mine? NONE. 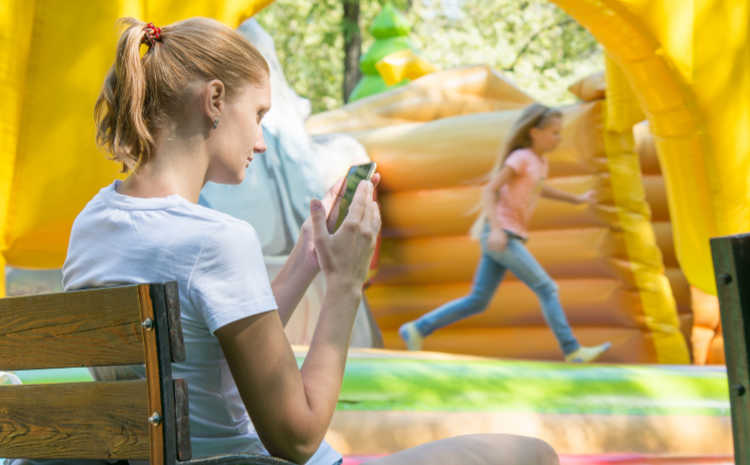 2. The Mom With The Screaming Toddler at Target

When I was about eighteen-years-old, I walked into a Target, heard a small child melting down, and rolled my eyes so hard I’m surprised I didn’t break my neck in the process. I let out an audible gasp and mumbled something about people needing to control their kids. I was eighteen. I knew nothing.

Nearly a lifetime has passed since then, and now when I hear a child having an epic tantrum in public, I do not judge the parents. Even if the parents are flustered and stumbling around uncertain of what to do and the kid is screaming loud enough to break glass, I don’t judge them.

Instead, I feel compassion for them. I don’t know their life, but I do know that parenthood isn’t easy. The child could have behavioral or developmental problems, or it could be perfectly on track and simply having an age-appropriate moment.

I just thank my lucky stars that it’s them and not me, throw them some understanding, and pray that others are doing the same.

3. The Mom Who Packs M&Ms In Her Kid’s Lunchbox

If another mom wants to pack fruit snacks or M&Ms in her child’s lunchbox, that’s her prerogative. Unless I’m her child’s pediatrician or dentist then what goes into her kid’s mouth and through his digestive tract is none of my business.

Once when I was nine my parents gave me a small grocery budget to buy anything I wanted in the store. I spent it all on Twizzlers, Nestlé Crunch Bars, and Circus Peanuts. Then I threw a few loose handfuls of it into my Beauty & The Beast Lunch Box and took it to school for lunch one day.

That was the mid-nineties. If that happened today, my story would probably break the Internet: Child Likes Candy, news at eleven. My point is that we are all a little too up in each other’s business these days.

Should parents feed their children healthy foods? Yes. Am I going to judge them if they give their kid a snacky treat? No. Why? Because it’s none of my business.

4. The Mom Who Feeds Her Kids Only Organic Food

Just as I’m not judging Hostess Mom, I’m not judging Organic Mom either. If a mother wants to feed her kids only free-range, non-GMO, grain-free, Fairtrade everything then that is her choice. If her kids are healthy and fed, then who am I to judge?

Organic Only Mom catches a bad rap and I’m not sure why. Sure, some super healthy eaters are also super obnoxious about it, but many are just normal people who pay a little extra attention to labels and spend a lot more time in the kitchen. It’s okay.

Also, some families don’t eat certain foods for religious reasons. Some are vegan or vegetarian for ethical reasons. I’m not going to pooh-pooh someone for standing by their beliefs.

I’m also not judging the mom who makes elaborate Pinterest-worthy lunches for her kids either. Who cares if she’s making your Wonder Bread and bologna sandwich look bad—stop comparing yourself to other people.

Yes, some modern mothers make insanely elaborate food creations for the sole purpose of appearing superior on social media. That’s their choice. They’re not holding you hostage and forcing you to look at their rice panda. You can look away.

However, some moms do it because it makes them and their children happy. They’re skilled and crafty and it’s another way of showing their children that they love them. Why would I judge that?

6. The Mom Who Takes Care of Herself.

Online mom culture has a way of glorifying a certain type of mom lifestyle. You know the one—the mom who never showers, lives in yoga pants, and whose life is in a permanent state of disarray. But not every mom identifies with that.

I understand why that version of motherhood is so talked about. Mom life is hard. We’re tired. We don’t have as much time for ourselves as we once did. We’ve seen some stuff and we want others to respect that.

Still, if a mom can balance motherhood and still be reasonably put together then why should we judge that? I sure don’t.

Let a mom live. I’m not over here judging anyone, and neither should you.


Have You Heard Of Sadfishing? Your …

People posting on social media are often criticized for only showing “their highlight reel.” Those brag-worthy moments that make all … Read More