A drug dealer connected with Samuel through the popular social media app Snapchat and sold him a fatal cocktail of fentanyl-laced Xanax (or Percocet).

He overdosed in his room at their family home in Santa Monica, California.

In an interview with the Today Show Berman tearfully shares:

“He asked his dad for a Cheeseburger and an hour later i went into his room because we had been talking about an internship for the summer that he wanted to do, and he was on the floor and…gone”

A straight-A student, a junior in high school, a football player, and a college-hopeful, Sammy had his whole life ahead of him. A life, that has tragically, been cut short.

Berman first shared the news with the world on Instagram, writing:

My beautiful boy is gone. 16 years old. Sheltering at home. A drug dealer connected with him on Snapchat and gave him fentinyl (sic) laced Xanax or Percocet (toxicology will tell) and he overdosed in his room. They do this because it hooks people even more and is good for business but It causes overdose and the kids don’t know what they are taking. 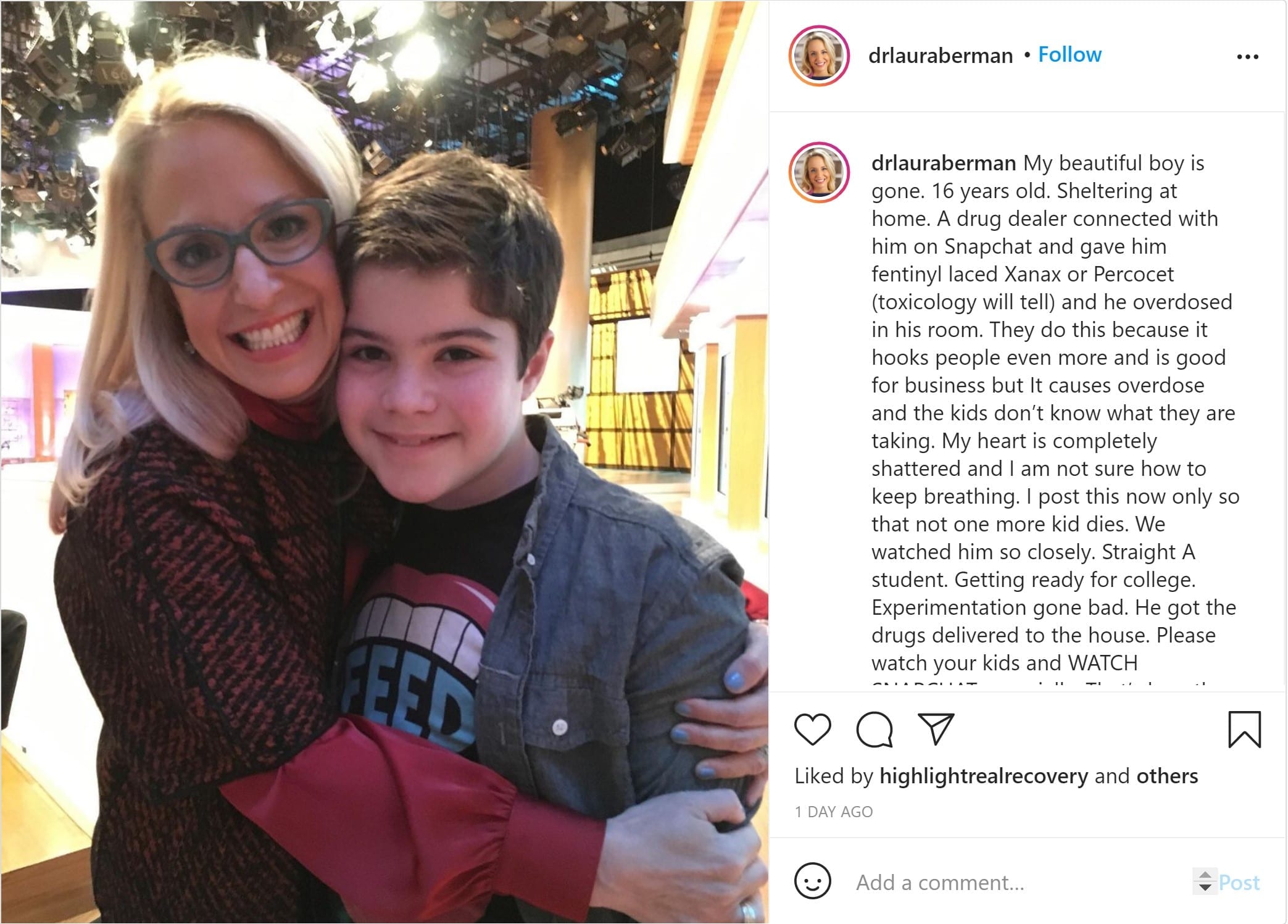 Berman and her husband, Samuel Chapman, don’t believe that their son knew he was ordering Fentanyl, a drug hundreds of times more potent than heroin. It is both odorless and tasteless.

According to the DEA, even tiny doses of Fentanyl, as little as the size of two grains of salt, is fatal for most people.

As a result of the ongoing pandemic, Sammy struggled with boredom and being cooped up at home. He wanted to experiment. His parents reveal that he discovered a colorful menu of pills on Snapchat posted by a man promising to deliver the drugs to the house.

So he went ahead and ordered what he likely thought was a “safe” drug with devastating results.

With the literal click of a button, Sammy was able to find drugs, connect with a dealer, order drugs, and have them delivered.

In a “snap.” All through a “harmless” social media app targeted at kids.

Snapchat is an image and video messaging app that allows users to capture and send ‘Snaps’ that self-destruct after a few seconds of viewing.

It also has a “Stories” function similar to Facebook and Instagram. As well as a map feature that shares a user’s location with other Snapchatters.

Snapchat is hugely popular with tweens and teens, snagging the top spot as the most popular social network, according to Statisca. 53% of all U.S. internet users aged 15 to 25 years use the app.

Which means your kids? Are very likely on it. And if they are on it? They now have a direct line to 1-800-got-drugs.

And if you’re adamantly shaking your head “No,” or whispering to yourself that “your kid would never do this,” think again. As much as we may not want to admit it, the reality is that what happened to Dr. Berman’s son could just as easily happen to your child.

Whether you want to believe it or not.

At first glance, Snapchat may appear to be harmless. However, don’t be fooled. It still holds many of the same dangers as every other social media app out there. And our kids are paying the price.

This is exactly why Dr. Berman and her husband have chosen to speak out about their son’s death and she addresses it in her Instagram post:

I post this now only so that not one more kid dies. We watched him so closely. Straight A student. Getting ready for college. Experimentation gone bad. He got the drugs delivered to the house.

Please watch your kids and WATCH SNAPCHAT especially. That’s how they get them.

She also pleaded with parents in an Instagram story to please get their teenagers off of the app completely.

“If you have teens, please read this and get them off Snapchat ASAP! This is a trend now and overdoses amongst teens is on the rise.”

Snapchat has responded to the news of Sammy’s death and has issued a statement to the press saying that they are committed to working with local law enforcement agencies in helping to solve this case.

The company also stated that they have “zero tolerance for using Snapchat to buy or sell illegal drugs” or other “illegal activities” and they have “no higher priority than keeping Snapchat a safe environment.”

As to exactly what they are doing to make this happen, your guess is as good as mine.

It is tragedies like this one that makes me want to pack up my kids and move to the bush; away from the big bad of the world, the internet, and social media. However, I realize that running away is not the solution.

And once you are done talking, monitor their computer use. It is our JOB to manage our children’s social media accounts (if they have them).

And even when we do all these things? There is still no guarantee.

Our hearts go out to Dr. Berman and her family and we just hope, along with her, that by sharing her son’s story, someone’s life will be saved.


TikTok Is Taking Over The World, An…