Filter Free Parents
Home Health + Wellness Some Baby Foods Found To Be Contaminated With Lead, And I Was...

My daughter is three-years-old and full of vibrant energy, as any toddler ought to be. But for the last two years, she’s been battling lead poisoning, and we have no idea how she got it.

Until now, that is, we think we might know the source of her poisoning thanks to a Congressional report that just came out with some startling news about the safety of several popular baby food brands.

Our family’s saga started in 2018 when we brought our daughter to the pediatrician for a routine well-baby check-up.

She was weighed and measured, given a vaccine shot, and my husband and I answered dozens of questions about her habits, behaviors, and feeding and sleeping schedules. In the middle of the appointment, a nurse took a blood sample and told us it was a routine screening for heavy metals.

Since we live in a rural, coastal area and drink well water, arsenic and radon are a serious concern. Less than a week later, we received a phone call with some bad news.

Our daughter’s lead level was two times over the limit of what is considered acceptable. What’s more, the doctor’s office noted, we’d be hearing from our state’s CDC in the next 24 hours.

The CDC tested our blood.

Right on time, the CDC called us within a day of us hearing from our child’s doctor’s office. I sat through a phone interview that lasted over an hour and covered a dizzying array of questions.

What year was our house built? Did we ever shop at junk stores or antique shops and install shutters or another interior decoration? When was the last time our well water was tested? What does my husband wear when he works in his boat shop where he builds wooden boats?

And finally, would we be free the following week for a lead abatement team to come and analyze our home?

By the time I hung up the phone, I was getting scared.

Strange people would be coming to take samples of our walls and window cills; they would take some of my daughter’s toys and clothes and even her pacifier away to be tested.

While we waited for the abatement team to come, my husband and our two sons, and I also had our blood screened. It was a frightening two-day wait, but when we got the results, we were mystified. None of us had lead present in our blood.

The only person in our house with lead poisoning was our daughter. But if she was exposed to all the same environments that the rest of us were, how was it that she was the only one with elevated levels?

It would take a few hours, and by the time he was done, we knew more than we ever thought we would on the topic of lead. For example, did you know that a common way people get lead poisoning in their homes is by dragging it home from an antique market?

While you might not see the lead dust on pieces like those, they are enough to poison you.

The man would leave with dozens of samples from our home. Tiny chips of wood and paint and wallpaper. Slivers of floors and doors and ceilings.

Even a small baggie with a pacifier, samples of our daughter’s favorite stuffy, and some of her clothes. 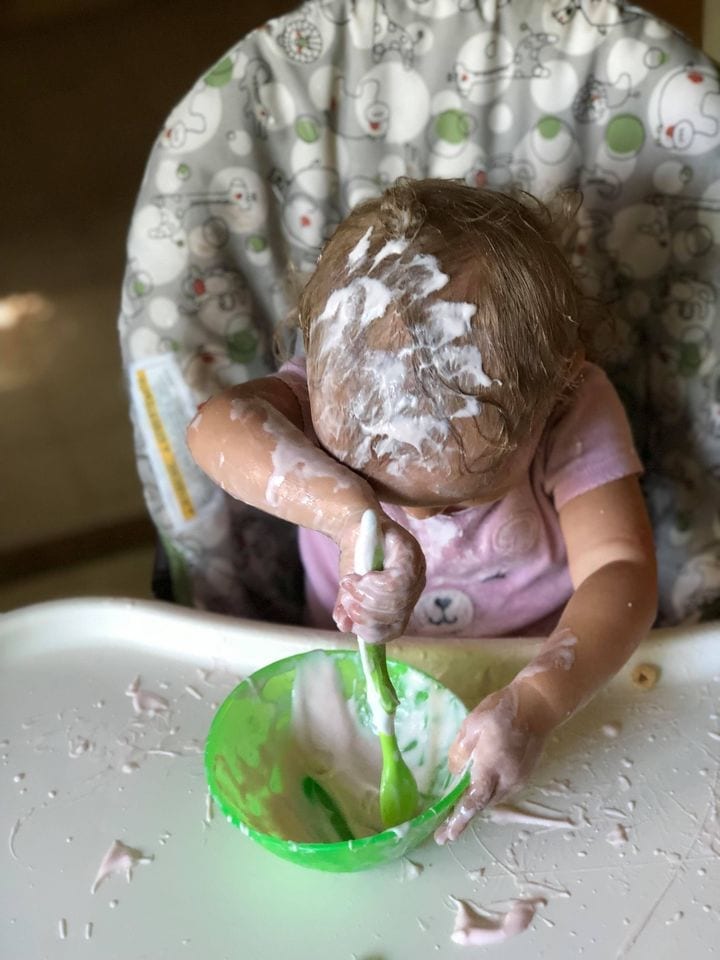 I Wondered – Could my breastmilk be the culprit?

At some point, the question of my breastmilk came into play. While my blood had no trace of lead poisoning, lead and other metals could get into my milk, where it would quickly leave my system and enter my daughter’s.

Was I unknowingly poisoning my daughter?

At the time, I was a news writer for Disney’s Babble website. I filed at least a story a day, sometimes two or more. My editor would throw me sponsored posts on occasion, and in a moment of sheer dumb luck, she connected me to a company in California that provides boujee at-home test kits to screen breastmilk for heavy metals.

They sent me a snazzy looking box with tons of information, and I followed the instructions to pump out some milk and ship it back to their lab. Two weeks later, I was informed that my milk was fine.

Why is lead so dangerous for infants and small kids?

According to the CDC, there is no such thing as a safe level of lead. That is the most important thing to know about lead; it is extremely toxic and scary and has no safe limit.

Anything over five micrograms per deciliter is considered dangerous. It puts a child at high risk of permanent IQ damage, including diminished ability to pay attention, low academic scores, and behavior problems.

My daughter had 11 microns per deciliter in her blood.

Our doctor told us that the only way to remove it was to give her an iron supplement and get rid of the lead source that caused this mess. The problem? We still didn’t know where the lead was coming from—and even worse, it takes a long time to get rid of lead.

Our doctor said we could get our child’s levels halved in six months but would that be enough time to keep the nasty side effects at bay?

The state CDC had our abatement test results back.

Before the man from the CDC left our house during that abatement meeting, he walked us through each room and pointed out areas that gave him concern.

Only two places in our home needed immediate attention; the exposed exterior wall in our bathroom, which is a charming feature that made me fall in love with the house when we bought it. And a door that had a hinge scraping at the 70 years’ worth of layers of paint.

He showed us how to replace the door without getting dust anywhere and how to paint the bathroom wall to seal in whatever his gadget was picking up. If we did that, he assured us, we would be ok.

The test results backed up the man’s hunches about where the lead was present in our home.

We all agreed that the leading theory was that the dust from outside of our front door might have been blowing into the house just enough to touch the living room floor. And maybe, the CDC said, our daughter’s pacifier fell onto that specific part of the floor, and she then put the pacifier back in her mouth and then BOOM! Lead poisoning.

To say that we did not leave that experience feeling overly confident is an understatement.

We spend the next year having our daughter’s blood retested for lead, and we saw that her levels were going down, albeit much slower than the doctor expected them to. Our pediatrician openly wondered if there was a repeat exposure that we missed.

I left that appointment feeling dread. How much damage was this doing to my child? 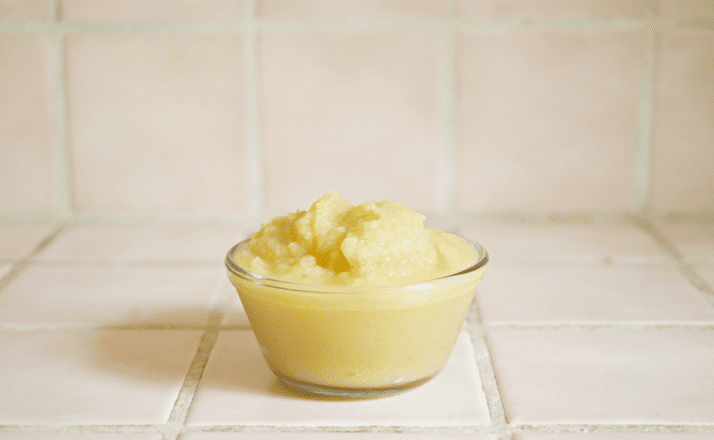 Baby food. It was the baby food this whole time, we think.

Back to that Congressional report. It turns out that some baby food companies may have been duping the public in the last few years about how they test for heavy metals.

For example, in the report, Hain, which makes Earth’s Best Organic—the brand we fed our daughter several times a day during her first two years—had dangerous levels of lead.

What’s incredible is that, according to this report, Hain appears to have been aware that they had toxic levels of heavy metals in their products.

They even made it known that they only tested ingredients and not the final product, allegedly to hide how much lead and other metals were in their foods.

• Corporate policies to test only ingredients, not final products, underrepresent the levels of toxic heavy metals in baby foods. In 100% of the Hain baby foods tested, inorganic arsenic levels were higher in the finished baby food than the company estimated they would be based on individual ingredient testing. Inorganic arsenic was between 28% and 93% higher in the finished products;

When I read this report, I cried.

It is less likely that my daughter had such high lead levels in her tiny body because of a random piece of dust that may or may not have landed on her pacifier.

What is more likely is that I poisoned my daughter by feeding her a product that I thought was the highest quality and safest option for her to eat.

What’s even more infuriating is that I paid almost three times as much for that baby food because I thought it was better for her health than the cheaper generic options available on the same shelf.

As she got bigger, we fed her more of the foods we ate and less of the store bought brand we had been feeding her, which may explain why her lead levels decreased so slowly.

Michael Hansen, a senior staff scientist with Consumer Reports, told PBS News Hour that parents who are worried about exposure to heavy metals from the food brands listed in the Congressional report should switch to unprocessed fruits and vegetables.

Here is the list of baby food brands that are listed in the Congressional ECP Baby Food Staff Report:

If you’ve fed your baby any of these brands, talk to your doctor about having a simple blood test done to screen for lead and other heavy metals.

This story was written by Sarah Cottrell and first appeared on Medium, it can be found here.

Mom Wonders If She’s The…


People Are Hanging Their Christmas …