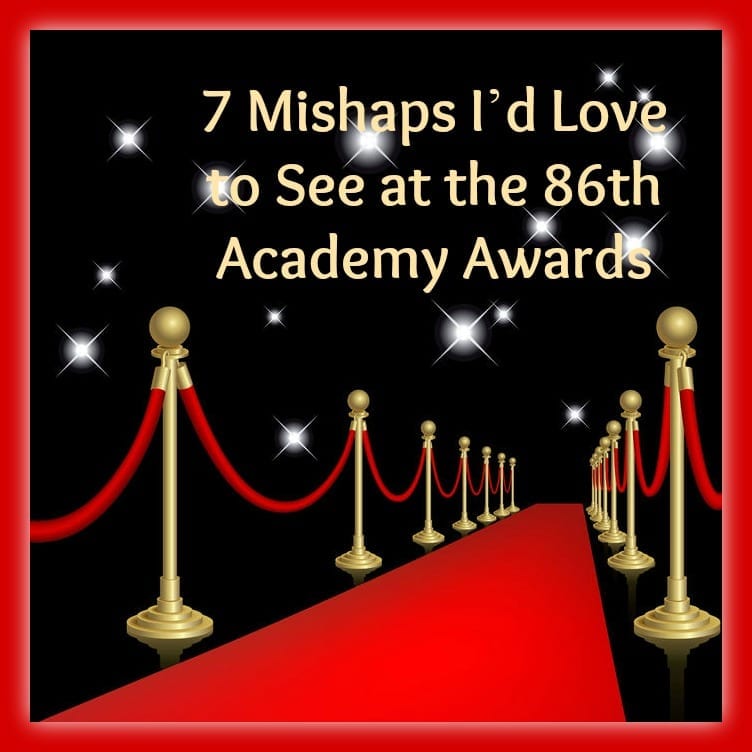 I’m a huge fan of the Academy Awards which airs March 2 on ABC. When the red carpet rolls out, my TV is on! I especially love the glitz and glamor! Million dollar jewelry sparkling under the lights of the cameras. Celebrities looking as if they just stepped off the runway. It’s an event that makes you wish you were one of Will Smith’s kids!

I’d be lying if I didn’t say I also enjoy the mishaps, like wardrobe malfunctions (Who can forget Jennifer Lopez’s almost nip-slip in 2012?) and F-bomb drops that manage to sneak past the bleeper thingamajig. The disasters are often more entertaining than the actual awards!

This year, I have a laundry list of mishaps I’d love to see. Here are my top 7 headlines:

Remember when Christian Bale went ballistic on the set of Terminator Salvation? He was so pissed off when a director ruined a scene, he threatened to beat some serious ass. Well, he’s up for Best Actor in a Leading Role for his work in American Hustle. I’ve been praying to the Oscar gods that the award go to Chiwetel Ejiofor (12 Years a Slave) or Leonardo DiCaprio (The Wolf of Wall Street). I want to see Christian go Terminator!

I think we’ve all had enough of Bieber Fever, which scientists have proven lowers our intelligence by 90 percent. No one wants to see Baby Biebs unshaven mug at such a classy event. If for some reason he manages to get in, let’s hope and pray he sits far, far away from Miley Cyrus.

Come on. You know he’s pretty. That’s why I’m hoping his date trips and spills wine all over his shirt. And that he removes it. While a camera is zooming in on him. Thank you.

What could be better than Jonah Hill actually winning Best Supporting Actor? Jonah Hill being pranked by pals James Franco and Seth Rogen while accepting his award. Imagine the bleeps after those two storm the stage!

If I so much as see one hip thrust or squat that is not somehow involved in an exercise regimen winning documentary of the year, I’ll pluck my eyeballs out and donate them to science. The event better be a twerk-free zone. Or someone better duct tape Miley to her seat.

The most shocking moment in Oscar history happened in 1974 when a streaker ran behind British Actor David Niven (who was presenting to the ever-classy Elizabeth Taylor). Things hardly went well after this happened. No one had a ball. Wouldn’t you love to see a repeat now that Ellen is hosting? In typical easygoing style, she’d probably keep the exposure to a minimum by dancing with the jolly nudist.

Despicable Me 2 is up for Best Animated Feature (I hope it wins!). I’m hoping, hoping, hoping that someone attends the Oscars dressed as a Minion!

What’s something you’d like to see at this year’s Academy Awards?

For Mother’s Day, Kraft Is Go…