Ah, the 80s. It was arguably the best decade ev-eeeer. Oh who am I kidding, the 80s RULE! The hair, the fashion, the music, the movies…Seriously, what’s not to love?

It was Madonna and Prince. Aqua Net hairspray and scrunchies. Jordache and Jellies. Care Bears and Cabbage Patch Dolls. It was a time of mixed tapes, Friday nights at Blockbuster, and I want my MTV.

It feels like yesterday…That is until I heard that American Girl just released its latest in its “historical character” collection: Courtney Moore, an 8-year-old valley girl circa 1986, and OMG, am I the only one that feels like eleventy-billion years old right now?

The new "historical" American Girl doll character is from the '80s so if you'll excuse me I will be spending the rest of the afternoon staring directly into the sun https://t.co/eCHZDYzRfu

She is BY FAR the YOUNGEST (as in NOT historical AT ALL) and she is totally 80s. Like, totally. Her official bio states:

Courtney Moore is growing up in California’s San Fernando Valley. She’s a total ’80s girl whose favorite place is Smiley’s Arcade because she loves playing video games. Courtney likes being in control of what happens, which isn’t always the case in real life. She and her stepsister, Tina, don’t always get along, and now that Courtney’s mom is running for mayor, things are changing at home. It’s a whole new game for Courtney, and she’s figuring out the rules as she goes.

Courtney Moore is a throwback to the year that brought us the space shuttle Challenger disaster, Halley’s Comet, the Chernobyl meltdown, and yes, the first American Girl doll.

It was the year that brought us some of the greatest movies ever made – Stand By Me, Pretty In Pink, Labyrinth, Ferris Bueller’s Day Off, Platoon, and Top Gun.

It was also the year that Madonna begged “Papa Don’t Preach,” the Bangles walked “like an Egyptian,” Bon Jovi was “Livin’ On A Prayer,” and Prince just wanted a “k-i-s-s, kiss.”

But it’s not just her appearance that brings us “old-timers” back to our glory days.

She also comes with an entire line of 1980s accessories. And all I can say is, bring on the nostalgia! I AM HERE FOR ALL OF IT.

According to the American Girl website, the 18-inch doll, and accessories set, which retails for $140, also comes with:

In addition, you can also shop the entire “Courtney’s World” collection, which includes a number of different outfits, high-top sneakers, belt bag and watch, and more. There is also a working PAC-MAN arcade game, a Care Bears™ Sleeping Bag Set, and a Caboodles® & Hair Accessories Kit.

Not to mention an entire array of Lisa Frank school supplies AND a bag of chips. Well, technically cheese puffs, but whateva. 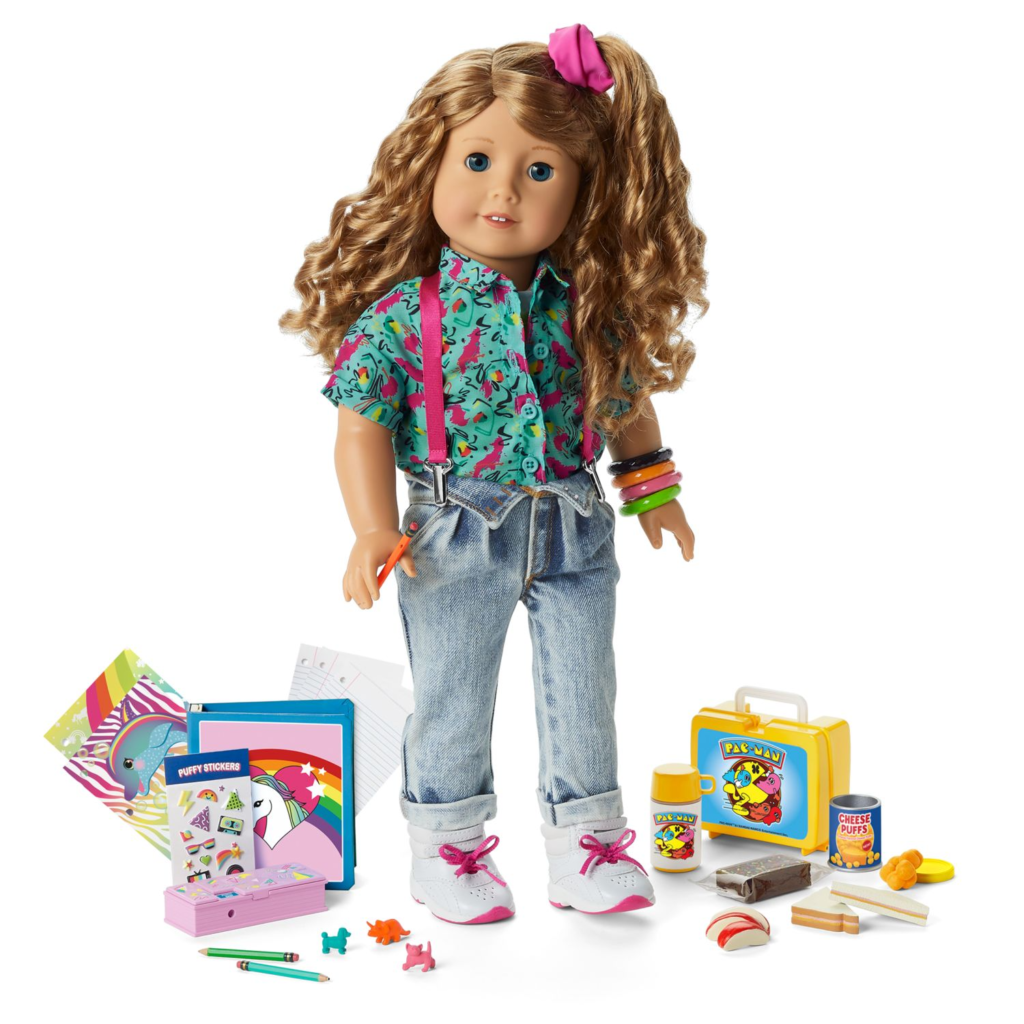 Just take all our money already.

While “Courtney loves going to the mall, especially the arcade, where she’s one of the top-scoring PAC-MAN™ players,” she also loves to create her own video games, with a focus on strong female characters.

In light of this, American Girl has partnered with Girls Who Code, a nonprofit that is on a mission to close the tech world’s gender gap and “change the image of what a computer programmer looks like and does.”

From now until the end of the year, the company will match customer’s donations dollar for dollar, up to $50,000. The money will be used to “support the organization’s programming and outreach to girls, including those from historically underrepresented minority groups.”

Additionally, they will also provide four $5,000 scholarships to “deserving Girls Who Code members to help further their education in computer science or a related field.”

It’s a win-win for everyone. Except for the whole “historical” part. That is not a win.

For any of us. Except maybe you young Millenials and Gen-Zers who are hysterically laughing while we ancient folks are simultaneously crying into our wine and racking up our credit cards with all things Courtney Moore.

Regardless of how WRONG American Girl got it with putting Courtney in a corner with all the other old “historical bitties,” there’s no denying that Courtney is totally rad. You can purchase her online now or in stores on September 25.

According to Dental Survey 59% of Y…

Some parents hold really strong feelings about saving baby teeth and I had no idea. The thought of keeping relics … Read More