Whenever you’ve gazed upon the mounted head of an animal, have you ever thought to yourself, “Huh, I wonder where the rest of it is?”

I can honestly say, I haven’t really given it much thought. I just assumed that it would be disposed of. Buried in the woods, maybe. Returned to the soil from whence it came, you know, something like that.

Apparently, I was wrong.

Taxidermists are turning deer butts into “assquatches” and they are both horrifying and hilarious.

Essentially, an assquatch is a mounted deer’s butt that’s shaped to look like a Sasquatch face. That’s right my friends, they are the literal picture of the saying, “get your head outta your ass.”

Supposedly, this is not a new practice. In fact, it’s been around for years.

Recently, however, pictures of assquatches have resurfaced and are making the rounds on social media.

Lazy Rabbit posted the following photos to their Facebook page where they are going viral with 2K likes, 4K comments, and 8K shares to date. 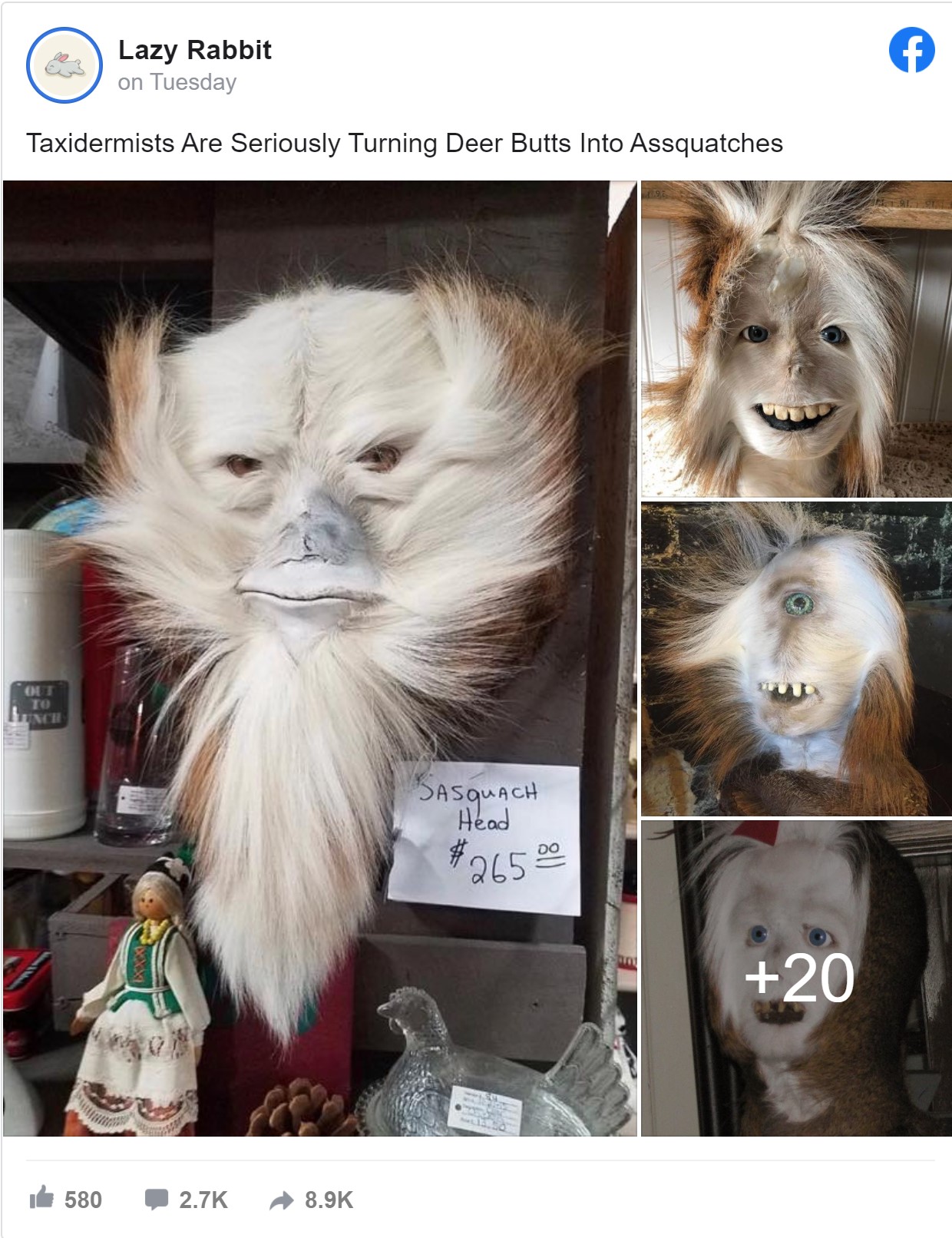 O.M.G. These are seriously “bad ass.” Or, as one commenter so aptly put it, “This is disturbing on so many levels.” So many.

Sadly, I will never look at a cute little Bambi behind the same way again.

Granted, the first one isn’t so bad. It does bear a striking resemblance to the flying dog, Falkor in The NeverEnding Story, no?

However, would I pay 265 bucks for a buck’s butt? That would be a HARD PASS, butt to each his own.

Of course, if $265 is leaving you feeling “bummed,” you could always go with this guy, a steal of a deal at less than half the price.

If price isn’t a factor, the Utah Werewolf is definitely a good bang for your buck.

AND comes with a free lifetime supply of nightmare fuel. So there’s that.

There’s no doubt that assquatches come in a variety of shapes, sizes, and looks.

From the downright creepy…

Is that a bow in his hair??

To the ones who look a little TOO close to human for comfort.

Here’s a tip for Tinder, if you want to put your best face forward, try a profile pic posing with an assquatch.

Then again, maybe not.

And then there’s this one. I will never unsee this. Ever.

I don’t know about you, but all I can think of as I look at these is whyyyyyy? Why would anyone do this?

In an interview with Vice, taxidermist Ryan Biracree explains that “anthropomorphized deer butts” came about because of an overabundance of butts.

“Like so many monumental achievements, it began with an overabundance of butts.

Taxidermists, as a rule, hate to see parts of an animal go to waste.

The front halves of deer are in high demand, but the junk in their trunks would routinely go to the dump if there wasn’t a creative outlet for them.”

Waste not, want not, I guess?? (Or just leave the poor pieces in peace).

Just in case you now have a sudden hankering for your very own assquatch (why tho?) you can find them on eBay or Craigslist or contact your local taxidermist.

If you’re more of a DIY type, you could always make your own.

Don Burleson wrote a handy-dandy how-to-guide on Assquatch-building back in 2006 and it’s still available on the world wide web.

According to Don, “It’s the perfect craft for children of all ages, young and old alike.”

“Deer ass alien heads are fun and educational activity for the whole family.  The kids get a lesson in fine art, anatomy and taxidermy, but the kids think that they’re just having fun!”

If “disemboweling Bambi” is your idea of fun, that is.

And if you don’t happen to have access to a deer carcass? Don’t despair. Don says any fresh roadkill will do.

“If you don’t have any deer butt’s handy, don’t despair.  Many creative folks will go on a scavenger hunt, searching for fresh road kill to use for their red neck art.”

As for assquatches? You can check out more of them here:

It’s no secret that when it comes to men and women, we are NOT the same. There’s a reason why … Read More