Filter Free Parents
Home Kids As A Parent, I’ve Learned That Sometimes The Best Thing To Do...

Everyone, no matter your job—accountant or dog walker, full-time parent, or therapist—has hard days at work. We have days where we feel like we’re about to lose our patience (or we do just lose it) days that just suck, or days that feel like they go on and on and everything goes wrong.

As a parent, juggling my daughter and my freelance career, I’ve learned that sometimes the best thing to do is just give in.

Yes, you read that correctly: give in. Instead of fighting those bad days, just let them go. Before you think this is crazy, here’s an example:

It had been one of *those* days with my daughter.

A day where nothing kept her happy, where I felt like I couldn’t get anything done. She was just starting to dip her toes into the toddler phase filled with boundary-pushing, patience-testing, and temper tantrums.

Meanwhile, I was attempting to make calls about medical bills and health insurance claims, trying to finish an article for a deadline, and attempting a pitch to a new editor.

Plus, my husband and I were scheduled to FaceTime our realtor and tour a home we were looking at buying that was across the country.

Oh, and did I also mention that I was pregnant and a couple weeks away from birthing our second child? As you could imagine, things were a bit hectic, and I felt a bit stressed.

It wasn’t a good day.

The article wasn’t finished, the calls had to be dropped, and the pitch was half done when my daughter went down for a nap.

Then, we toured the home over video only to not like it and not put an offer down. Exhausted and defeated, I set out to finish the rest of my work.

Five minutes later, my daughter woke up from the world’s shortest nap.

Trying to calm her, I gave her some food. She instantly threw everything off her highchair onto the floor. Black beans, tiny tomatoes, pieces of rice and avocado littered the floor around her. And you can only imagine how much fun those tiny items are to pick up.

Just as my husband finished his workday, and could take over parenting our daughter, he had to leave for a dentist appointment.

He left and my daughter was crying, running around the table in circles, itching for a bedtime but not quite there.

What did I do? I finally had to give in.

To the day that wasn’t going my way, to the projects that hadn’t been finished as planned, and to the chaos around me. Because fighting it all was getting me nowhere.

I went to the freezer and pulled out a big piece of chocolate cake that I’d just put in the day before in an attempt to not eat the entire cake in one day. 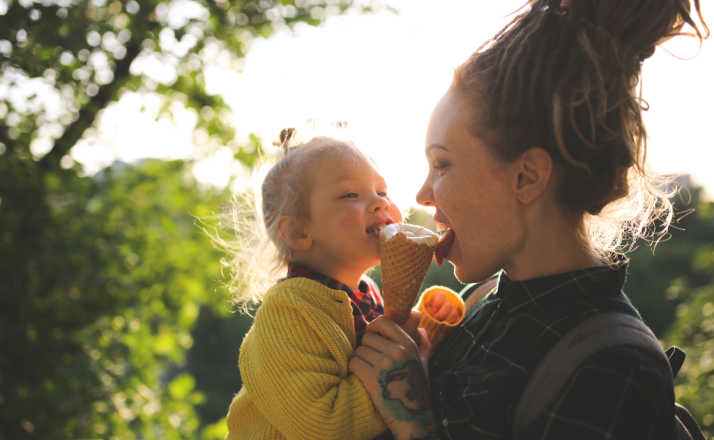 With my daughter on one hip, I shoved that cake slice into the microwave to defrost while I pulled out the vanilla bean ice cream. I loaded the warm chocolate cake with heaps of ice cream while my daughter stared, fascinated, and not upset. (She obviously inherited her parents’ love for dessert.)

Then, my daughter and I sat down on the couch and took turns taking bites (mine obviously much bigger than hers) of that gooey, warm, melted delicious dessert.

And you know what? We both smiled and laughed and giggled and enjoyed ourselves. There was peace and it was fun.

Letting go and giving in turned the day from feeling harrowed to feeling happy and making a memory with cake and smiles.

I knew I’d get the article edited and submitted later. I knew I could finish the pitch after her dad came home. I knew I had time to finish what needed to be done, but I had to make peace and know that things wouldn’t happen on *my* timeline, they would just happen on-time.

So, this is my new approach to hard days and toddlers: just let them eat cake and add some ice cream. Just give in.

Because sometimes life is hard, and it sucks. Instead of trying to power through every day, some days I’m going to eat the cake and let my daughter eat cake and we’re going to sit down, love it, and take a moment to enjoy life.

Because sometimes with a mouthful of chocolate cake you realize life isn’t that bad.

Also did I mention I taught her how to lick the plate after we were done? Yeah, it was pretty amazing.

Remember back in the day, pre-kids, when you’d hit up the club with your friends on Friday nights and dance … Read More