Filter Free Parents
Home Mom Life Humor The Flying with Kids Survival Guide (So Everyone Else On The Flight...

Flying with Kids: A Survival Guide

Last year, right after my son turned one, we travelled to the US to visit my older sister. The trip involved a 12-hour flight, a layover with an international connection, another shorter flight and a long car ride.

It sounds like a lot, but we were excited and hopeful with the kind of naive enthusiasm enjoyed only by first-time parents, and people on cocaine.

Sadly for us, we thought we were boarding a plane and flying to another country with our kid, but what we were actually doing was reenacting the movie The Quiet Place, where the louder our kid screamed the more everyone around us wanted to murder us.

Turns out, traveling with kids is not easy.

But I do have some tips and tricks I learned in my vast experience of flying with my son that one time:

When packing for our trip, I packed enough snacks, meals, juice boxes and milk cartons for my son to embark on a two-month pilgrimage on foot.

So much so, that when we got to customs, the TSA officer thought we were starting an illegal vanilla-flavored milk business in the US and gave us a choice: he could either open every single carton and analyze them -thus ruining them- or he could pat one of us down, which makes zero sense and that’s why we have #metoo.

My dear boyfriend volunteered to the pat down, and the officer let us through with our food and 42 milk cartons, and thankfully so, because our kid drank two.

Yeah, turns out kids on planes aren’t interested in keeping up their calorie intake as much as they are in finding all the other kids on the plane and telepathically agreeing on a time to start simultaneously crying.

My advice is: Pack snacks for your kids that are more fun than they are nutritious.

Think chips, colorful cookies, fast food, M&Ms, drugs (but not hard ones, we’re responsible parents), anything that will keep them entertained and happy for a few minutes so you can breathe.

And if you’re thinking, “I don’t find eating entertaining”, then good for you healthy person who doesn’t eat their feelings, I don’t envy you at all.

Anticipating possible food or poop-related accidents, I did pack a few extra outfits for my son in our carry-on bag. But for some reason I didn’t include socks.

I figured, if such a catastrophe happens in which my son gets poop all the way down to his socks, it’d be easier to just land the plane.

And about 10 minutes after the plane took off, my kid grabbed his fruit pouch and squeezed the hell out of it, getting apple sauce all over his socks. And nothing else.

Just his socks, the one thing I didn’t pack. That’s Murphy’s Law for you, the toast is always going to fall on the jam side, and then your kid will step on it.

My advice is: Whatever your brain tells you not to pack because “what are the chances of that happening?”, pack two of.

Also, turns out the fake air they use on airplanes to keep the cabin pressurized and dehydrate your internal organs so you’ll pay 9 dollars for a water bottle is very effective for drying the toddler socks you washed in the bathroom sink. 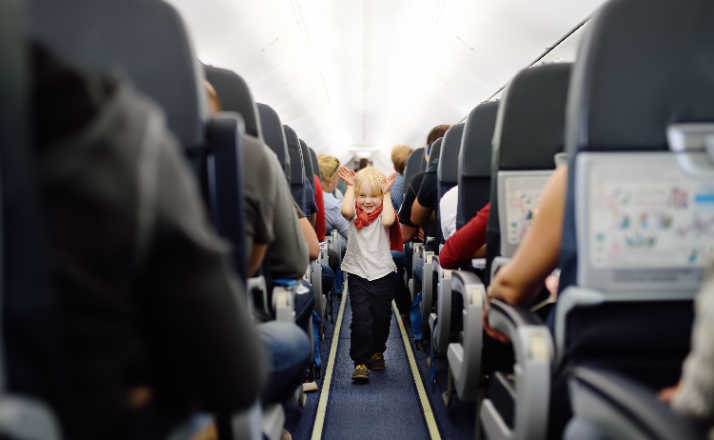 Just be prepared for a rough ride

In an attempt at keeping my kid entertained during the flight, I packed all sorts of toys and games, and filled our iPad with enough movies and videos for him to watch through his late teens.

But pretty early in the flight I learned that no matter what you do, kids are going to get fuzzy, because they’ll be tired, and bored, and uncomfortable, and stuck on a plane for 12 hours in a seat designed to make all humans uncomfortable unless they’re a cat.

And it makes sense, because you’ll feel the same way, except you’re an adult, so your freak-outs are contained in a cage of shame and self-restraint that prevents you from sitting on the floor crying when you accidentally went to the bathroom at the wrong time and now you’ve been stuck behind the food cart for 42 minutes.

And if the stress of trying to keep your kids happy wasn’t enough, if you’re anything like me, you’ll also be worried about bothering everyone else on the plane.

Don’t. People on the plane who are parents will feel sympathy for you, and people without kids will curse you and your descendants.

But they already did that the moment they saw you board the plane and were disappointed you had a bunch of kids instead of a bunch of snakes.

My advice is: Just breathe and concentrate on surviving those few hours. And if you make it to your destination with 50% of your sanity and hopefully 100% of your kids, you did great.

Bon Voyage! (That’s French for “you should’ve left the kids with grandma”).