Filter Free Parents
Home Kids Berlin Is Reopening And Our First Trip Back to the Playground Left...

My son and I stood just outside of the playground gates for the first time in almost twelve weeks. I scanned the scene – at least a dozen children were running around, their parents on the sidelines sitting under chestnut trees.

No one was wearing a mask.

It looked like any other day spring day at my neighborhood playground in the heart of Berlin. But of course, it wasn’t just a regular day.

My hands squeezed the handle of my baby’s stroller. This was not safe.

I was afraid if we stepped on the sand, I would not be able to contain my anxiety and that it would come pouring out in ways that were ugly, unhealthy.

Maybe more than covid-19, I was afraid of another type of infection – passing my anxiety onto my four year old son.

We walked to another playground, just a few hundred feet away. This one had wood chips instead of sand, obstacle courses instead of swings and slides.

It was emptier – two women and three children. I smiled and feigned enthusiasm for a moment I’d been fantasizing about for almost three months – the moment my son could be a kid again.

In my fantasies, my four year old is no longer cooped up in our apartment.

He is, for the first time since we started lockdown, free to play with abandon.

But we were not in my fantasy. We were in Germany’s first stages of reopening from a pandemic that has taken something from us all.

For my small family, it cost us one job and the freedom for my four year old to be a kid. Though the first loss hurt, the second loss felt more profound.

Like so many parents who feel overwhelmed by 24/7 parenting, I’d been eager for life outside the home to resume.

For more than eight weeks, we listened to the advice given by the German government: we stayed indoors, left only for groceries and exercise.

To replace the educational activities and social life he had in preschool, I scoured the internet for experiments we could do with vinegar and baking soda, I dyed rice for a sensory bin, I played all the puzzles.

Then I gave into letting my son watch Paw Patrol on repeat.

But then it happened: seven weeks after we locked ourselves inside our apartment, the Berlin government made the call to re-open playgrounds.

Instead of feeling relief and joy, I found myself paralyzed with fear.

I didn’t understand why the government deemed my son’s preschool too dangerous to reopen but playgrounds safe.

I had a million questions and no one to answer them.

Were parents expected to enforce social distancing among children?

Our preschool had asked us to refrain from any playdates – how was going to the playground different?

What about slides and swings and climbing structures – should we bring disinfectant to clean them?

How would I convince my four year old to keep his mask on? What if a runny-nosed child sneezed on him?

For the first time, I didn’t feel like listening to the advice from the government – it felt dangerous. 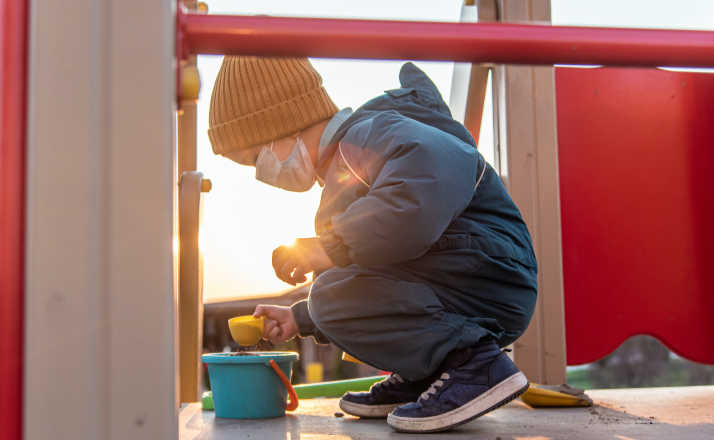 Where were the articles telling parents how to handle life reopening? Who had a manual for coming out of a pandemic without permanently damaging my children’s mental health?

I wasn’t alone. Friends and family around the world confessed their anxiety about things we used to take for granted, like family trips to the grocery store, the first day back at preschool, a trip to a newly opened museum, or a walk around a busy lake.

Like me, many worried about transferring their own emotions onto their children.

With no clear guidance, I reached out to several child therapists.

I wanted to know how I could protect my son’s mental health. Already he’d gotten upset when strangers walked too close to us on our bikes. I could tell he was internalizing my fears.

“It’s okay to have anxiety, especially in the current environment. Perhaps the goal is not to get rid of the anxiety but more so be kind and patient with yourself first, before addressing your child,”

In worrying about protecting the mental health of my children, I’d neglected to do any work to improve my own.

So I spent time thinking about what I needed to feel safe. I thought about my risk tolerance and weighted that against my son’s need for play.

I reached out to friends and asked about their post-lockdown playground experiences. I walked through my local park to see what it looked like in this new world.

“It can be easy to want to shield kids from all the things that life brings, like a pandemic,” Aileen Kelleher, a child psychotherapist in Chicago told me.

But kids are resilient and my role wasn’t to shield, it was to comfort, she added.

That resonated with me – I didn’t want to be one of those parents who removed all obstacles in my child’s way. I wanted to be the parent who helped my child become strong enough to overcome obstacles on his own.

I asked my son if he wanted to go to the playground, unsure of what I wanted him to say. He replied with a simple yes.

I talked to him about how trips would be different, like how he would have to wear a face mask. I told him what to do when he needed a break from it. “Have that plan in place but also give grace for their capacity,” Kellie Cathey, a licensed social worker and family therapist in Philadelphia, told me.

Since talking with the child therapists, I’ve been working on the techniques they taught me, like expressing how I’m processing my own feelings.

I’ve also been trying to support my son in expressing his feelings, whatever they are, instead of trying to protect him from feelings I wish he didn’t have (like anxiety or being overly frightened).

Three weeks after the playgrounds opened up – almost twelve weeks without any real outdoor play – we made that first trip back.

It felt dangerous and thrilling all at once.

I held my baby while my son excitedly yelled for me to watch him on the slide and then asked me to push him on the swing.

I’ve stopped worrying about being overly anxious in front of my son. Instead I focus on showing him the copping skills we both need to make it through these uncertain times.

If You’re Using The Cry-…