Since 1998, 883 children have died from Pediatric Vehicular Heatstroke or PVH for short. The saddest part of these deaths is that each one of them was preventable.

Unfortunately, when these tragedies reach the news, we often see an avalanche of comments blaming the caregivers for negligence.

So, when a TikTok creator posted a simple hack for preventing PVH, it is odd that the response from the internet was not, “let’s spread this message to prevent more deaths.”

Instead, there was a backlash that anyone who even needs this hack is a monster who shouldn’t have kids.

The video was posted by a woman named Kristy Wilson, who goes by @pinkjeepgirltx on TikTok. She is shown at the top of the video driving with one shoe on as she asks, “Why am I driving with only shoe on?”

The camera pans to the backseat where there is an infant car seat as she says, “because I have my infant grandson in the car with me.”

The camera then shoes her barefoot as she steps around the car as she says,

“I’d rather deal with the hot pavement than leave my grandson in the car, so I leave my shoe in the back,”

and then she grabs her missing shoe from the back seat where her grandson is.

The backlash is kind of misguided.

The video has been viewed more than one million times, and 10.5K people have left comments, mostly dragging the grandmother for having to be reminded that there is a child in her car. 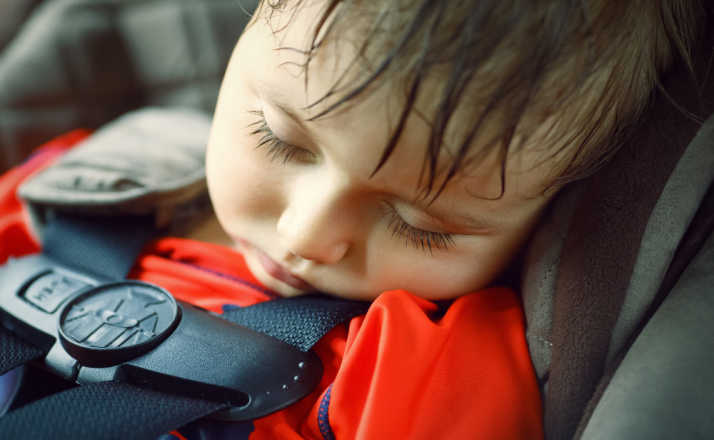 But the thing is, she’s actually doing something pretty darn smart to prevent leaving your child in the car on a hot day.

If she’s not the primary caregiver and is simply watching her grandchild only on occasion — even once a week, say — then she’s not likely used to having a child in her car.

And when you think about it, having a rear-facing car seat and sleeping baby in the car is enough for anyone to have a mental slip and forget there is someone there who needs tending.

According to noheatstroke.org, there has been an average of 38 deaths per year attributed to pediatric vehicular heatstroke.

And when those numbers get broken down, you can easily see that it could happen to anyone.

Between 1998 and 2020, 467 children were forgotten by a caretaker, 227 kids got into a car on their own and were then trapped, 173 were intentionally left in a car by a caretaker, and 15 deaths are described as unknown.

Tips! Do not forget your infant in the hot car the summer.??

The responses to the TikTok video show a wide range of skepticism from people who mainly think that only a negligent person would forget a child.

“the fact that people have to actually put a shoe in the back, or their phone in the back to not forget their child just proves they shouldn’t be a parent.”

Ouch. But she’s not alone; someone called @BigJDub wrote,

“all of the people defending her for stating that she shoe is more memorable than her grandson. None of you should be near children.”

Plenty of people stepped up to defend the post, though.

“This isn’t her daily routine!! It’s very easy to be on auto-pilot. This is very smart.”

“I thought this was brilliant. I don’t know why people are hating. This isn’t a daily routine, the baby isn’t crying, or it’s a longer drive, brains autopilot.”

Others were mystified that anyone would drive without a shoe and wondered why she was driving with her shoeless foot on a peddle when her car is obviously a two peddle, meaning an automatic.

No matter what side of the debate you fall on, I think we can all agree that no one wants to see a child get hurt.

And when someone has a great idea to prevent an already preventable tragedy from happening, perhaps we shouldn’t be jerks online.

Instead, and this is a wild thought here, maybe we should just listen and take the damn advice.

It’s that glorious time of year- the leaves are changing colors, the air is crisp and cool, and pumpkin spice … Read More