Most of us are swamped with holiday responsibilities: gift shopping, rage-cleaning for hosting, wrapping an endless train of gifts, and all of the other tasks that are associated with pulling off a memorable holiday for our families & friends.

It can be hectic, & genuinely overwhelming sometimes. And it can be easy to forget in the midst of the holiday hustling that there are some people who would gladly take on our task list, simply for the joy of being with others on the holidays.

We moms joke about “alone time”, because we desperately need it sometimes. So it’s easy for us to forget that some individuals really are alone, all the time.

There are lonely people that long for the company of others- especially around the holidays.

A lonely woman placed an ad on Craigslist offering to be a “Grandma for Christmas”, helping out in any way needed simply for the chance to spend time with a family on Christmas Day.

The ad was posted on Craigslist in the Tulsa, Oklahoma area, and was apparently written by a woman who desperately longed for holiday company. Her very first line is heartbreaking:

I have nobody and would really like to be part of a family.

The mystery Grandma even offers to cook dinner for any family willing to take her in for the day. And if a likely delicious home-cooked holiday meal isn’t enticing enough, she also offers to:

I’ll even bring food and gifts for the kids!!

Grandmas are always the BEST when it comes to doting on their grandkids, so the offer seems quite appealing, no?

But the poignancy of the ad is her deep longing to be with a family -any family- to avoid being alone.

Imagine being alone, and no, not that harried mom “Ahh… at last, an hour to myself!” sort of alone. We’re talking countless days, months, perhaps years of silence.

The feeling of isolation grows, especially around the holidays, when everything is about togetherness & FAMILY.

Whatever circumstances led this woman to post an ad on Craigslist clearly show that loneliness hurts; she desperately longs for human connection. 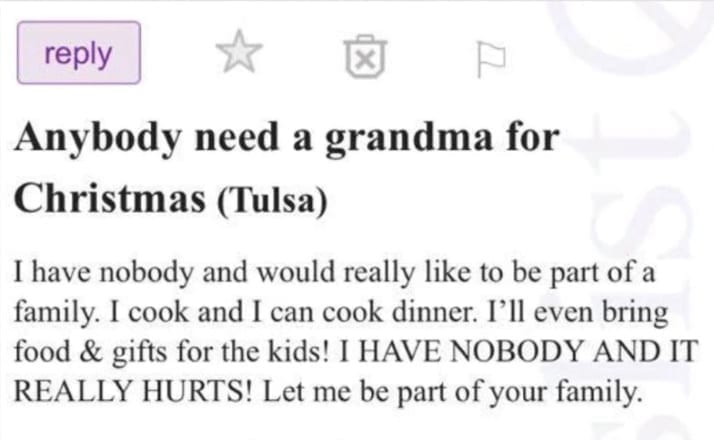 Just reading the woman’s vulnerable words makes me want to take her up on her offer. I want to hug her, make HER dinner, & let her feel the warmth (and chaos!) of family.

The responses to the “Grandma For Christmas” ad, unfortunately, were savage.

People accused the woman of being a fake, claiming that she was probably trying to scam or take advantage of a family.

Others called her a “parasite”, saying it was pathetic for someone to try & leech onto another family.

One person bluntly told the woman to kill herself.

The mystery woman’s only response to the hate was to thank everyone “for the extra shot of pain”; she then deleted her post.

If the story ended there, it would be painfully ugly and tragic. But there are good people out there on social media, too. And one of those good ones decided to take up “Grandma’s” cause.

21-year-old Carson Carlock took a screenshot of the ad and posted it on his Facebook page, using the hashtag #FINDGRANDMA.

While thousands of people offered to help, the mystery woman remained silent.

Carlock knows all too well what loneliness feels like; his own mother passed away from cancer last year. So he went one step further on “Grandma’s” behalf.

As he explained to the New York Times, he sent the woman a message on Craigslist to let her know how many people wanted to connect with her:

I simply just want help you find a family. You won’t be alone this Christmas.

Carson did receive a response from “Grandma” whose name is Carrie. She was hesitant to accept any offers from families after all of the backlash to her ad on Craigslist.

And Carrie’s story is quite heartbreaking. She is is her mid-50s, and currently battling cancer. Her only family nearby consists of her daughter, from whom she is estranged, & her young granddaughter that her daughter doesn’t permit her to see.

But Carrie’s ad experience did have a happy ending after all.

She and Carson Carlock met in person at a local McDonald’s. And according to the description in the New York Times, the moment was beyond heart-warming:

When she saw him, Mr. Carlock said, she burst into tears and said, “Come here.”

Carrie hugged Carson closely & the two had a good cry.

Carrie reported to The Times that she has been receiving tons of emails from people that, like her, have been feeling lonely & longing for family. She is hoping that she & Carson can team up and help out some of the individuals. Carrie knows that kind of pain, & wants to help others in need:

I don’t want anybody to feel the way I felt. Most of us just want the feeling of love and belonging.

Carrie nailed it: we all want the feeling of love and belonging. Her initial ad is a poignant reminder of how we can so quickly take our own families for granted. It also is a heartbreaking illustration of how painful loneliness can feel for isolated individuals.

But in the spirit of Christmas, an outreach of love and compassion made all the difference.

And the best part? Love & compassion isn’t exclusive to the holiday season- we can reach out & connect with others all.year.long.

The last few weeks have been an emotional roller coaster of fear, anger, binge snacking, staring at walls, and crying … Read More