Every once in a while I’ll be scrolling through social media when I come across a post that someone has captioned with, “I was today years old when I found out that…” And almost every single time, I’m right there with them.

Today was one such day.

Today I found out that I’ve been putting garbage bags in my trash cans WRONG. My entire life. Which, at an average of two bags a week, is approximately 3500 times, give or take.

That’s a lot of bags.

In A TikTok video that has gone crazy viral, Hannah Ian, a mother and co-founder of the professional organization company, Stored Simply, shares her genius trash bag hack for inserting bags into a trash can.

The clip has been viewed over 11.7M times with over 135K shares, and it will make you wonder, “Why have I never thought of this before?”

She starts the video off by saying:

So have I, apparently.

She then flings the trash bag out in front of her, aggressively shaking it multiple times to open it (because THIS IS THE WAY), and promptly destroys all my preconceived notions about what it means to open a trash bag the right way, saying:

“You’re not supposed to do that.” 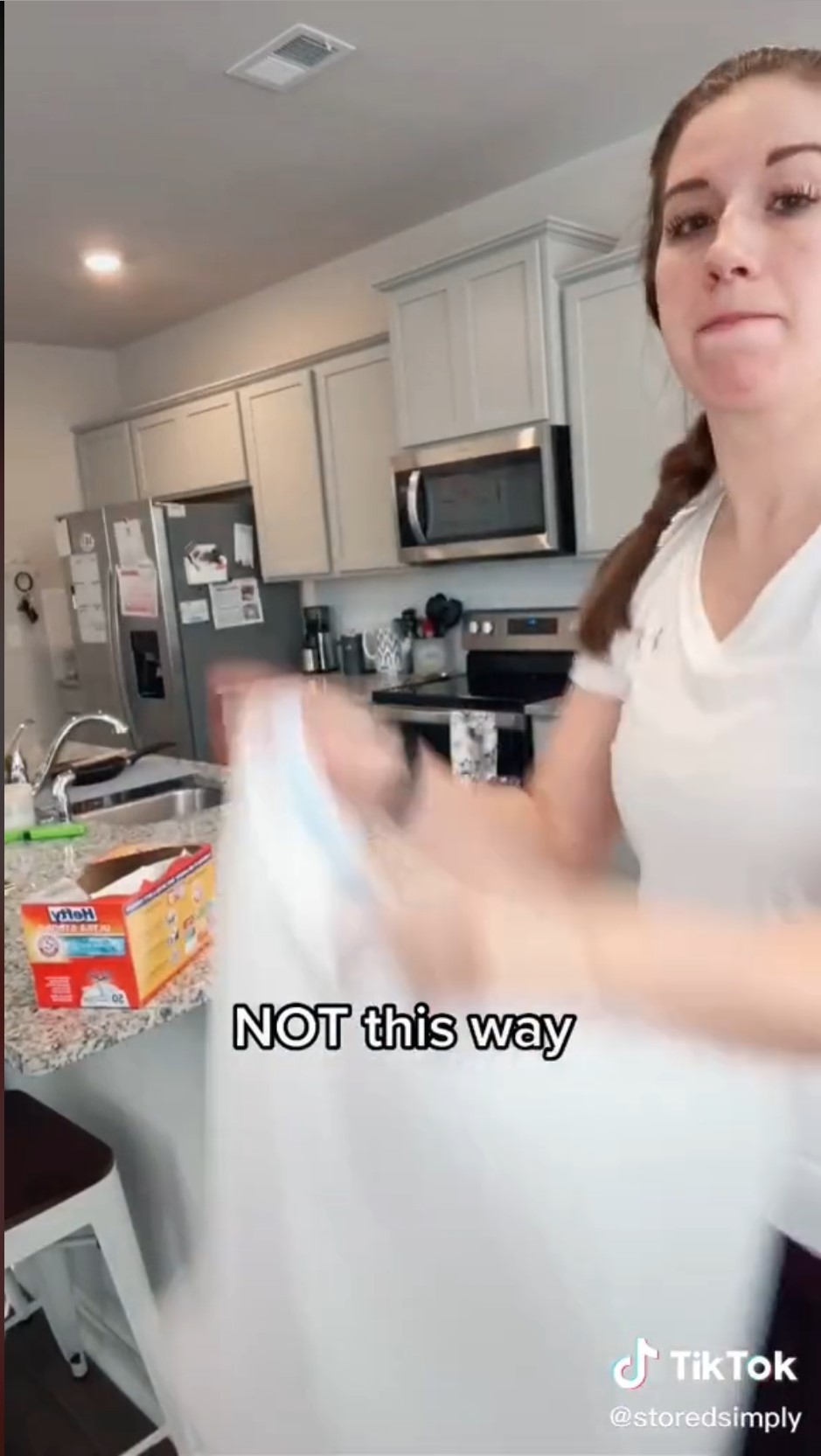 Wait…is this true? Because this is exactly how I open every single garbage bag, ever. (Although admittedly, sometimes I do it a bit more savagely depending on my mood.)

Apparently, it IS true, and OMG, is everything in my life a lie?

Hannah spends the next 30 seconds demonstrating the deep, darkly-held secret to placing the trash bag into the can properly.

First of all, she points out that the seam is on the OUTSIDE, indicating that the bag is actually inside out, to begin with. She then recommends putting it on like a hat.

Apparently, you put it on like a hat, I will demonstrate.

She partially opens the bag (minus the frantic flinging and flailing) and places the bag over the top of the trash can. 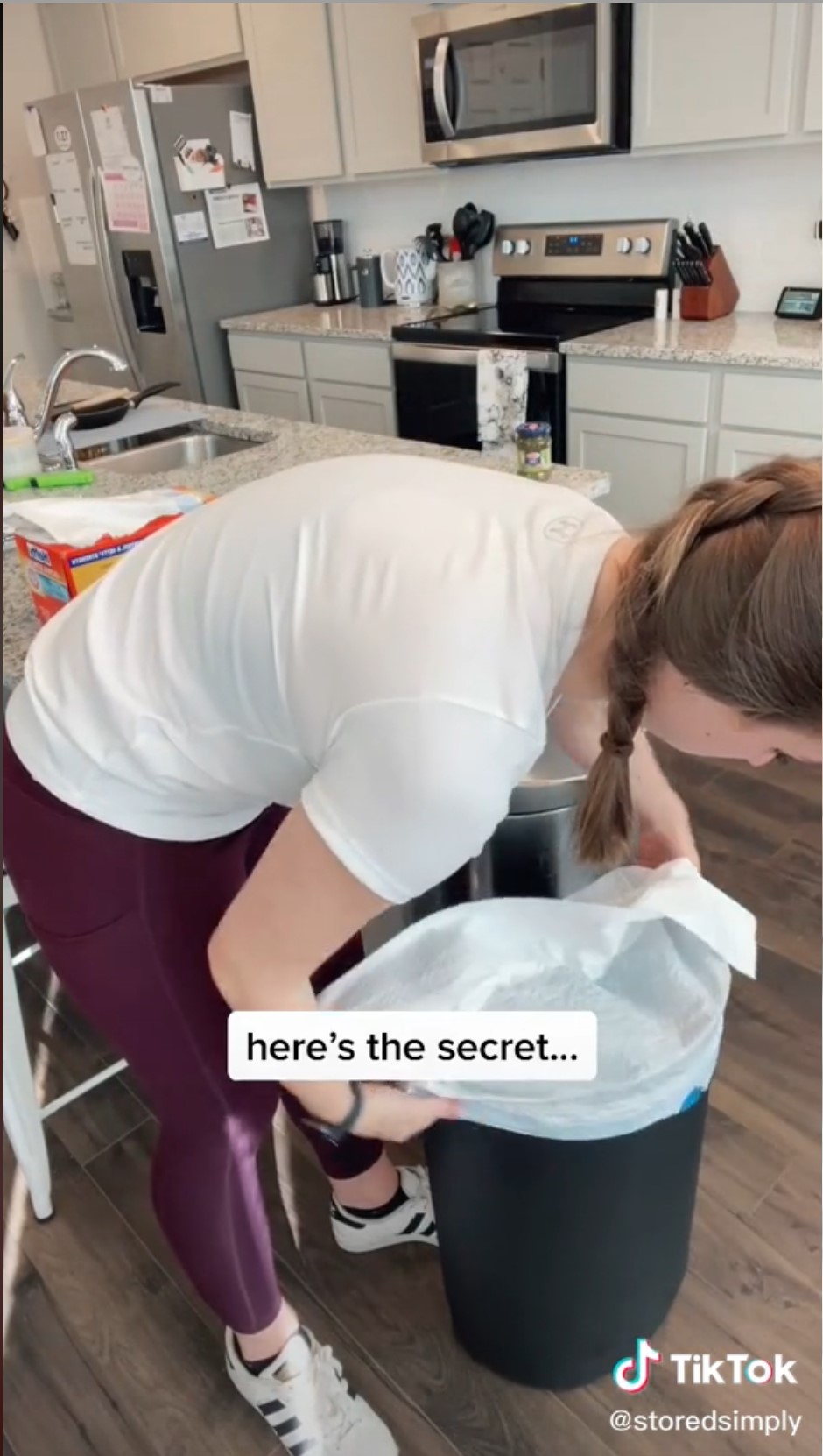 Once it’s covering the entire outer rim and pulled tautly, she simply pushes the bag down inside the can. 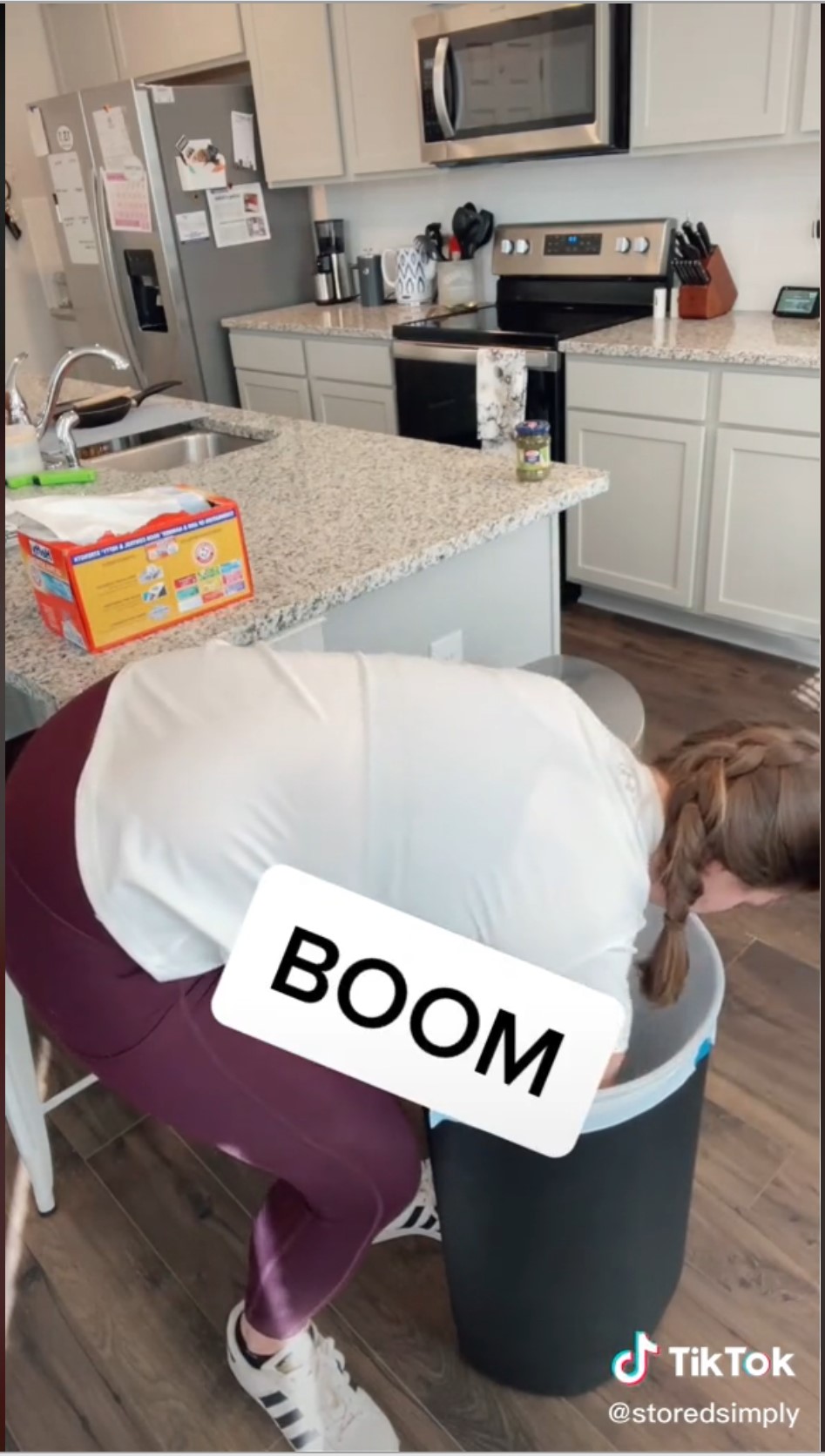 And that, my friends, is all there is to it. With one slight caveat. Her business partner and fellow co-founder, Lydia Amerson, told Good Morning America,

“The method can work on almost any garbage can, though if there isn’t a hole in the back of the can then an air pocket will likely form.”

Hannah also said in the interview that she first saw the hack online and made a video for her and Amerson’s followers.

The hack has received over 9.5K comments and caused some seriously hilarious debate.

Some people were 100% in favor of throwing out the old way and embracing the new, thanking Hannah for enlightening them and teaching life skills.

Other commenters, however, were having none of it. If their way is wrong then they don’t want to be right.

After all, doing it wrong can be fun.

And comes with some not-so-surprising benefits.

You have to admit, it does feel good to release some of that pent-up aggression.

Just ask DonD’s wife. Sometimes, actions speak louder than words. And for DonD he doesn’t need words to know when his wife is mad. She has a garbage bag for that.

Even a plastic bag expert chimed in on the debate:

Which begs the question: does it matter?

Hannah and Lydia put it to the test. They did a follow-up TikTok where they tested the strength of a garbage bag inside out and right side in.

They placed 15-lb weights into each bag and the verdict? It literally doesn’t matter which way the bag is. The strength is the same.

? The Office – The Hyphenate

I’m going to be honest, will I start putting my garbage bags in the trash can like this? Probably not. And neither will Mark.

What about you? Are you team fluff & stuff or hat & push?

You can view the original TikTok here:

Did you know this!? #lifehack #organizationhacks