Childhood anxiety is real. Here’s what it looks like for us.

“Check my smile, check my smile!” I startled awake and opened groggy, two AM eyes at my six-year-old, who was flashing me a panicked, creepy, closed-mouthed grin.

Then I got it. He was having a panic attack.

This isn’t an uncommon occurrence for this little guy – he has had several in the past year – but this was the first one that woken him out of a sound sleep.

Why did he think he was having a stroke? Because his school had participated in a Jump Rope for Heart assembly to gear up for the Heart and Stroke Foundation fundraiser, during which the presenters had told them, as a way to make the cause more relatable, that even children can have strokes.

They taught them the signs of a stroke, and what to look for if they think someone near them might be having one. This is useful info, generally speaking. But for a kid with anxiety, it was a seed planted, laying dormant, germinating, until the night it finally bloomed. I knew he wasn’t having a stroke – but (not so) funny story, I also have anxiety and OCD, and I needed to check him thoroughly because him saying the words also caused me to panic irrationally.

So we did the check to reassure each other – both arms lifting, smile symmetrical, tongue sticking straight out, speaking normally, nothing drooping. He wasn’t having a stroke.

But of course, anxiety isn’t rational. He knew he was safe, but his anxiety had already snowballed, and finding out that he was fine wasn’t enough to halt it. I laid down with him in our bed, cuddling him, stroking his hair, reassuring him he was safe.

Then, despite the late hour, I put on a story podcast he loves. The distraction allowed his brain to relax, and he finally nodded back off. 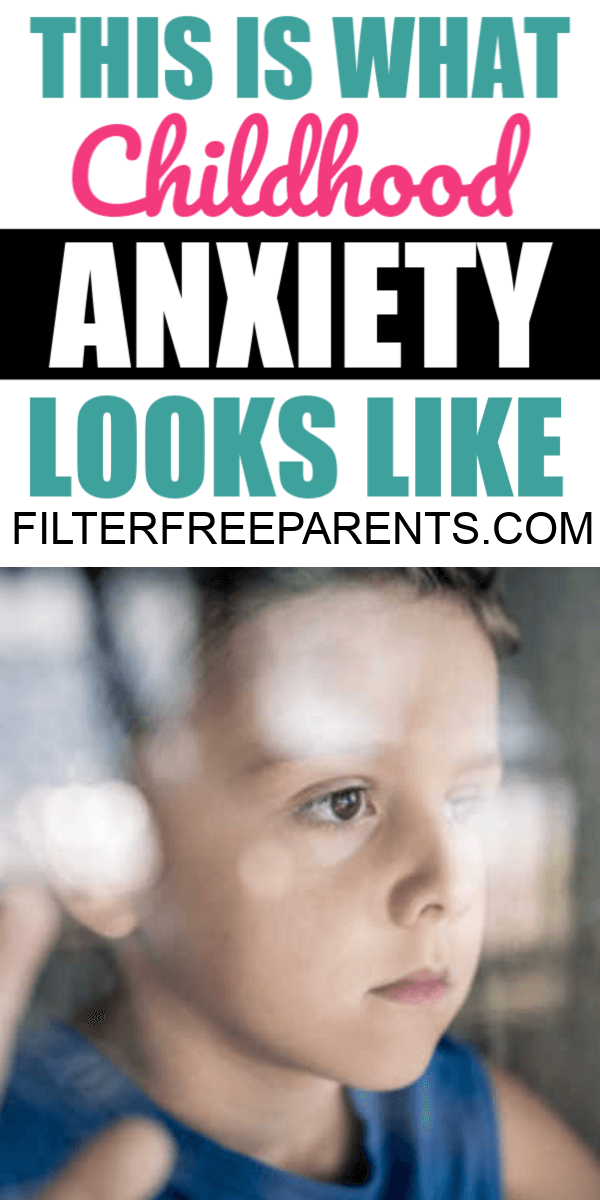 This is our battle – trying to fight anxiety with reason, when anxiety is completely devoid of it.

You can reassure children when they are anxious, but it often doesn’t do much. I know that isn’t what any of us want to hear.

My son comes from a long line of anxiety-sufferers. My eleven-year-old is practically an anxiety pro at this point. When anxiety was keeping him up at night, we brought him to a counselor seeking help.

Even though it sometimes feels hopeless here are some things you can do as a parent to help childhood anxiety.

Reading articles is a great start, but it is never a substitute for speaking with a professional. Start with your child’s family doctor or pediatrician, they can direct you to next steps. If you don’t have a regular doctor, look for counseling services in your area that offer help to children.

Anxiety can be a diagnosis or a symptom. It’s important to make sure you are giving your child the right help.

This is counter in nature to every parental instinct. When your child has a problem, you want to listen to them, to comfort them, to help them find solutions, and to talk them through it.

This is exactly what you should do for rational problems and occasional worries – but not for persistent anxious and irrational thoughts. She suggested instead to give as little time to those thoughts as possible.

Don’t allow them any power. Refuse to pay attention to them. From a parental standpoint, that means reminding children of the tools they can use to ignore the thoughts.

For kids, it takes some practice, but here are some ways to manage anxious thoughts.

-Make a worry monster out of a tissue box. When a worry arises, write it down, and feed it to the monster.
-Actively tell the thoughts to go away (I gave my son permission to tell them to “Fuck off”. It seemed appropriate in this one instance.)
-Set aside a time period, say fifteen minutes a day, whatever length of time works, in which the child can worry as much as they want to, but it stays in that time.
-Active breathing and relaxation. This can include a technique in which the child tenses each muscle group, working from the toes up, and then relaxes them, individually and purposefully, until the whole body is relaxed.
-Using a distraction such as a book, a book on tape, or music at night time, or an activity during the day.

Some reassurance is okay – you want your child to know you care and aren’t being dismissive – just remind them that you are helping them to ignore the intrusive thoughts, but that you aren’t ignoring them.

When a full panic attack hits, I honestly just do whatever works in the moment.

My six-year-old legitimately believes he can’t breathe and he is having a heart attack when he is having an anxiety attack (and as a fellow sufferer, that’s exactly what it can feel like.)

Distraction helps. Sometimes saying, “In…out…” to help him breathe, or showing him a graphic that opens and closes to mimic breathing does the trick. Unlike intrusive thoughts, this is a time for reassurance.

For some children, anxiety is a phase. For others, it’s a life-long battle. Helping your child gain to tools to handle anxiety – be in chronic anxiety or the occasional stress – will empower them well into adulthood.

As parents, there are a lot of things that scare us about raising kids. One of the worst fears, of … Read More