Quarantine is changing American culture in some funky ways. Happy Hour has been replaced by Zoom parties.

Working out happens in dark secluded places like a closet or a basement instead of a gym.

And getting groceries – something I didn’t realize that I loved to do until I could no longer do it – has gone totally virtual.

One Kroger Clicklist patron found out the hard way how hilariously wrong online ordering can go.

In a Facebook post by Dave Paul, who may or may not be the customer highlighted, reveals a Clicklist customer feedback form from about a year ago that resonates especially hard during these trying times. We are convinced it is resurfacing because we are all living this right now.

Apparently, someone ordered a pound of green beans but they only got….wait for it…one green bean. Like, literally one.

“I ordered 1 lb. of green beans. This is honestly the most hilarious thing – the entertainment value of seeing one sad lonely green bean in a large produce bag more than makes up for the lack of remaining green beans,”

But it gets funnier. 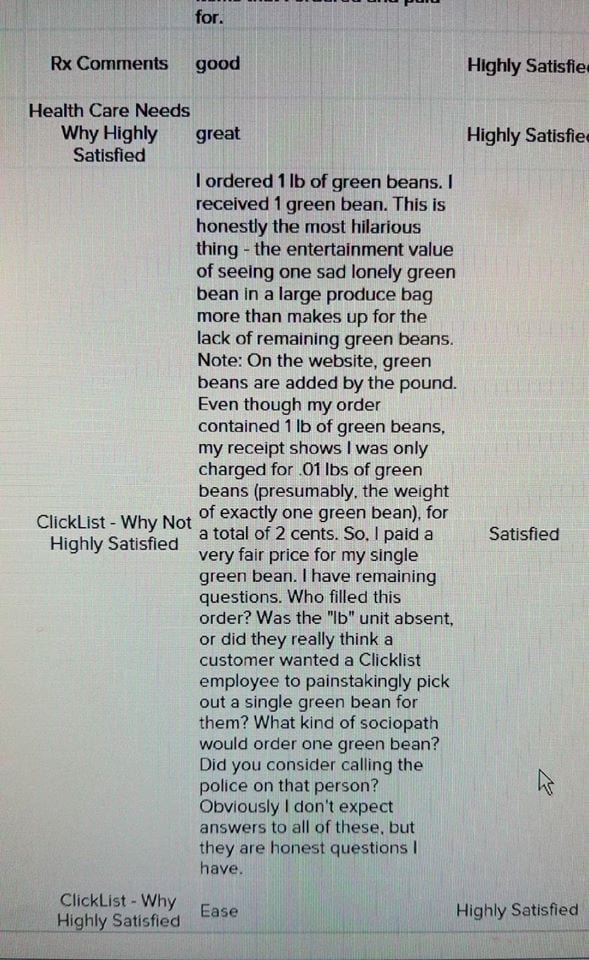 “So, I paid a very fair price for my green bean. I have remaining questions,” LOL! So do we, feedback guy.

There are so many questions left unanswered.

“Who filled this order? Was the “lb” unit absent, or did they really think a customer wanted a Clicklist employee to painstakingly pick out a single green bean for them? What kind of sociopath would order one green bean? Did you consider calling the police on that person? Obviously, I don’t expect answers to all of these, but they are honest questions I have.”

The post has been shared more than 64K times and the comments are absolutely sidesplitting.

One commenter asked, “Wonder what 1.5lb would have brought?”

Another commenter shared a similar problem. She wrote,

“I’ve had the opposite happen and received a pound of ginger and a pound of garlic, but at least it’s feasible that someone would want a large amount of those. But one solitary green bean?!?”

Another commenter shared a screenshot of an Amazon substitute. She apparently tried to order toilet paper and Amazon was predictably out, but don’t worry, they think makeup remover pads will do the trick.

In this new normal of virtual living where even the most mundane tasks of running errands now become something of an adventure, it helps to have a sense of humor.

Hopefully, this anonymous customer can follow up with an equally funny response from Kroger given how old the post is.