The world of fashion is often known for deliberately pushing the boundaries of good taste- many brands believe the more outrageous their new designs, the better (so some designers seem to think, anyway).

But there’s a fine line between being provocative and simply being downright offensive, however, and one fashion brand took a massive leap right over that line into “WTF are they thinking??” territory- by involving school shootings in their new spring collection.

Streetwear company Bstroy is facing a massive backlash after debuting their newest line of sweatshirts that feature the names of schools that have had mass shooting incidents… and include bullet holes. 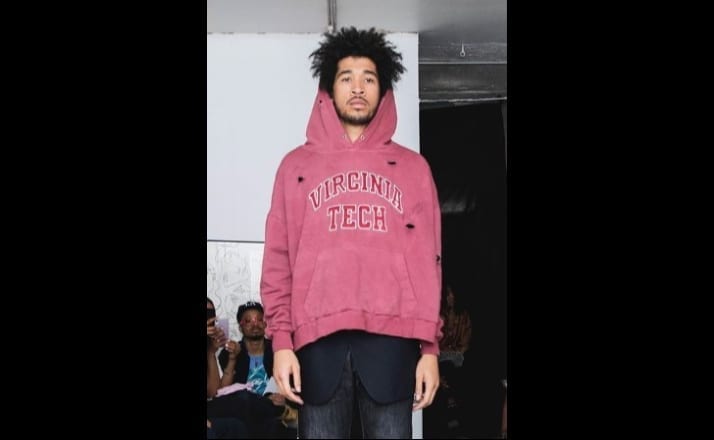 The New York-based brand shared several photographs on its Instagram page of models wearing pieces from their Spring 2020 collection. In numerous images, the models are dressed in hoodies that each prominently display the name of a school that has suffered a mass shooting:

Children were killed in each of these schools. In cold blood. Their lives, & more importantly their deaths, should not be exploited as fashion fodder.

The idea of wearing a sweatshirt with a school name that represents a horrifically tragic event is pretty twisted to begin with. But what makes it worse -so appallingly, distastefully worse- are the BULLET HOLES that are strewn throughout the material.

Bstroy released an “artistic statement” (also on their Instagram page) to describe its motivation for the hoodie design:

Like the irony of dying violently in a place you considered to be a safe, controlled environment, like school.

We are reminded all the time of life’s fragility, shortness, and unpredictability yet we are also reminded of its infinite potential.

Yes, it IS ironic for innocent children to be killed in their own schools, which should be a “safe, controlled environment” for them. No disagreement there. Life is fragile, it’s unpredictable, and it can be breathtakingly tragic.

But…. bullet holes in a hoodie don’t emphasize the school shooting tragedies. If anything, they mock the tragedy. While we certainly should not forget the graphic reality of what those poor murdered students faced, using the visual as a fashion trend is mind-boggling.

And to no one’s surprise, Bstroy’s  school shooting sweatshirt line was met with swift outrage on social media.

The majority of Instagram users were disgusted by the photographs featuring the hoodies, & expressed it quite clearly in their scathing comments: 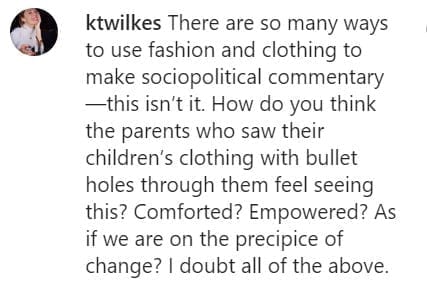 Especially poignant: this comment left by those who personally knew one of the Sandy Hook teachers killed in the school shooting: 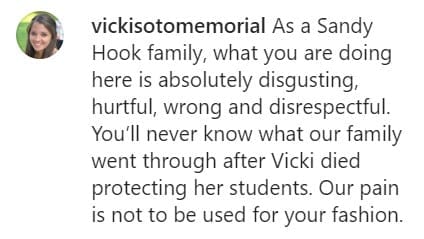 This one really hits home; if ONE parent of a school shooting victim should have to be faced with this hoodie somewhere in public, that would be one too many:

These are just a handful of the comments that vehemently opposed Bstroy’s “fashion”; there are countless others.

Bstroy brand co-creator Dieter “Du” Grams stated that their intention IS to be upfront & blunt in their violent fashion trends.

As he explained in a recent New York Times interview:

We are making violent statements. That’s for you to know who we are, so we can have a voice in the market.

But eventually that voice will say things that everyone can wear.

There’s obviously a financial incentive to have a “voice in the market”- although Bstroy originally created the hoodie line solely for the purpose of its spring collection show, it is supposedly considering selling them.

How much of that money, if any, would be donated to the families of mass school shooting victims?

Would any of the money be contributed to platforms dedicated to addressing the current plague of gun violence in our country, or to those attempting to eradicate the epidemic of (actual and/or attempted) school shootings?

Seeing someone wearing a Virginia Tech sweatshirt riddled with mock bullet holes wouldn’t make me ponder the irony of shootings in a “safe” setting like a school. It’s not cool, edgy, ironic, or trendy.

Children being murdered in cold blood by guns in school is painfully sad & tragic. Period. It’s not fashion, and it should never, EVER be.

I think everyone can agree that we already have more than enough violence to stomach in our current society, and don’t need a fashion brand deliberately exploiting sickening school shootings for profit and notoriety.

Sometimes knowing how to build a healthy lifestyle is hard enough for us, let alone trying to institute those practices … Read More

The threat of child predators is obviously one that parents need to remain vigilant about, especially as predators attempt to … Read More