Filter Free Parents
Home Mom Life Humor F*ck You Subscription Boxes. Summer Camp Is NOT Where I Make It.
Apparently I’m the last to know that a $7K summer camp experience can be replaced by origami paper, an underwhelming volcano experiment, and a 3-D monkey puzzle.

Some of us parents take second jobs just so we can afford to send our kids to kick-ass summer camps.

Summer camps with things like field trips, aquatics, camp counselors, and a vending machine full of Funyuns. I’ve even worked a night job as a massage therapist, rubbing strangers’ naked bodies to pay for things like cheer and coding camp.
But thanks to an advertisement in my Facebook feed, I’m realizing I didn’t have to do any of those evening shifts – I could’ve just bought a $20 Little Passports subscription box instead. “Summer Camp in a Box!” the ad says.
Don’t I feel like a moron for wasting my forearm strength and hard-earned tip money?

I always thought the entire point of summer camp was small people leaving my home so I could think my own thoughts in silence, but I was dead wrong.

According to Little Passports, it turns out camp can be on my concrete strip of a patio, at my kitchen table, or in my closet-floor crying spot.
Who needs a poorly designed, ill-fitting camp t-shirt, mean girls, and the smell of sweated-through sunscreen to feel like they’re at summer camp?
Not my fucking kids. Not anymore.  My favorite reality show Instagrammers say that personal growth is the hidden gift of this pandemic, and they’re right.

I am learning so goddamn much about myself, such as I can be a homeschool mom even though I don’t have any training whatsoever, nor interest.

It’s amazing what we supermoms can do when we aren’t given a choice. Like when my husband, Derrick, has to work late again and I magically whip up dinner for everyone (and put the baby to bed) before rushing out the door to my 7pm deep tissue client.And now I get to crush this new challenge of being a #momboss by taking on the labor of an entire summer camp and its staff all by myself while Derrick scream-talks on work calls upstairs, and plays Animal Crossing.
The kids won’t shut up about how proud they are that their father already earned enough bells to buy the game’s most expensive item, a grand piano. Also, does the Little Passports box come with a Tetanus infection-turned-to-lockjaw that combats constant yammering about video games?

Curious to see what’s included, I clicked on the link in the Facebook ad.

I was stoked to see a wall map of the U.S.A., which will be an interactive way to see just where we won’t be visiting this year (or next).
There’s also a fingerprint analysis kit, deflated balloon, and “sticks.” Those items should keep my kids entertained for a solid four minutes, which is way longer than these shit-ass virtual class hangouts can.
Admittedly, I’m desperate for even thirty seconds with no one asking me for more screen time or Otter Pops, so I’ll call those four minutes for $20 a straight-up win, even if I have to spend them assembling an elaborate balsa wood cuckoo clock. 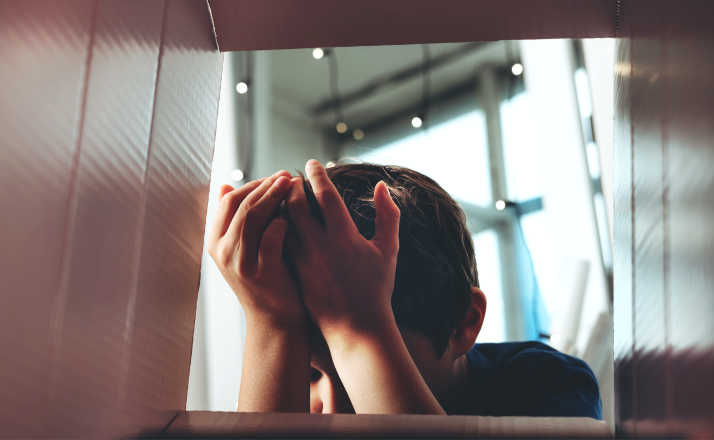 And never mind that these flimsy kid-meal flashcards and sushi-shaped erasers will likely end up in the Bin of Pointless Crap an hour later, because this more affordable and totally comparable summer camp option means I’m no longer giving spa clients happy endings in exchange for my kids’ summer memories.

And I can’t wait to use my superpowers to find a fun way to redirect the kids each time they ask, “Is the janky summer camp box here yet?” on an hourly loop for the next three months.

But the Mompreneur in me does wonder if Little Passports is missing out on a million-dollar idea here: what about a companion subscription box for us overwhelmed moms?

Sure, the kids have the entirety of summer camp in three tiny suitcases that won’t clasp shut, but I know I’m not the only mom who could use some peyote, a clean pillow to scream into that hasn’t been farted on, and that charming lady who teaches Cosmic Kids yoga.
Oh, and a handful of restraining orders against my regular clients who just found I’m not coming back to the spa, thanks to this lifesaver-of-a-box.
They desperately miss my touch, and let me know it every single day by slowly driving back and forth in front of our house, waving cash money out of the car window.
Hopefully they don’t block the mailman who will be delivering us a bitchin’ summer, thanks to Little Passports and the literal garbage they’re passing off as “summer camp.”


“I Feel Grief My Kids Have To…

There Is Finally A Book For Kids Ab…

Many parents these days are snapping up mission-driven books for their kids. Books that teach inclusivity, acceptance of diversity, how … Read More

Gymnast Chellsie Memmel is no stranger to hard work. At the height of her career, she was an Olympian and … Read More