Science has spoken. It turns out that tweens and teens are less likely to fall asleep during class if they have a later school start time. And as a parent of a teenager, I feel like this is obvious, no?

Over the course of a two-year study, researchers examined the impact of changing school start times on sleep for students in elementary, middle, and high school.

They surveyed approximately 28,000 students in the Cherry Creek School District in Colorado, one of the hundreds of districts in the United States to push back start times over the past few years.

Middle schools in the district delayed their start times by 40 to 60 minutes while high schools delayed theirs by 70 minutes in order to begin at or after 8:30 am.

As for elementary schools? They actually started 60 minutes earlier so that older students could take the later school buses.

The author of the study, Lisa Meltzer, a pediatric psychologist at the National Jewish Health in Colorado, told CNN:

“Since many districts stagger their school buses in order to pick up everyone, the elementary school students began school an hour earlier over the course of the study so that older students could be picked up later.”

The students were surveyed 3 times; 4 months before, and 6 and 18 months after, the time changes. They answered questions regarding bedtimes, wake times, sleep quality, and daytime sleepiness.

And the results are in.

The findings were published in the Oxford Academic Sleep journal on Thursday.

For those of you worried about the elementary students having to go to school an hour earlier, it turns out they were just fine. It had almost zero impact. (No word on their parents though.)

The middle and high schoolers were a whole different story, however.

Apparently, going to school later resulted in more shut-eye at night and less sleepiness during the day. A win-win.

In fact, high schoolers got a whopping 46 minutes more sleep PER WEEKNIGHT and middle schoolers came in a close second with 29 minutes. 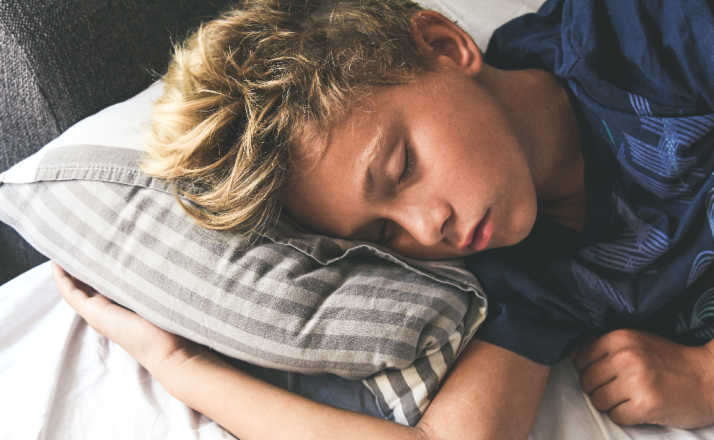 46 MINUTES. That’s an extra 3.8 hours of sleep per week for all you non-math people. What I wouldn’t do for more sleep…but I digress.

While this may not seem like a lot to some people (I am not one of those people), it actually has a significant impact on the students’ overall well-being.

The study states that:

“Sleep is essential for optimal health and development, academic achievement, and social and emotional functioning.”

Not getting enough sleep can result in moodiness, hyperactivity, crankiness, impulsiveness, and a short attention span, among other things.

If you’re the parent of a tween or teen this sounds extremely familiar.

Getting more sleep during the week also had an added bonus when it came to weekends. Researchers discovered “a significant decrease in weekend oversleep.”

In other words, your teenager won’t be sleeping in until noon anymore.

This makes sense. If school start times are later there is no longer such a huge discrepancy between bedtimes and wake times during the week and on weekends. Their sleep times become more consistent.

We all know that teenagers are notorious for staying up late. But in their defense, you can thank puberty for that. During adolescence, the body’s natural sleep-wake cycle shifts. Teenagers’ bodies release the sleep hormone, melatonin, later on in the evening than in adults.

Teens typically go to bed around 11 pm. The American Academy of Pediatrics says that they need 8 – 10 hours of sleep per night. However, because of early school start times, most aren’t getting anywhere near that. They are living in a perpetual state of exhaustion.

And yet, it doesn’t have to be this way.

Sleep experts and health professionals, as well as the CDC, agree that schools start too early.

While the answer seems simple, it’s not. Changing school start times involves a lot of moving parts. Working parents may not be able to accommodate later start times or multiple kids on multiple schedules. In addition, there are transportation issues and bus schedules to be sorted out.

However, the benefits far outweigh the costs.

Our kids NEED sleep. Sleep is a critical part of their brain and body development and is vital to their mental and emotional health. If pushing back school start times is going to improve their well-being, should there even be any question?

Were you recently transported back to the year 2012? Have you been having flashbacks of women from your high school … Read More