In an episode right out of “When Wild Animals Attack: Suburban Edition,” a friendly neighborhood man shoots to superhero status when he takes on a rabid bobcat in an effort to valiantly save his wife.

I kid you not.

The 46 seconds of hellcat horror was captured by a home security camera and has since been shared on social media where it has gone viral with over 6.9M views.

This was a wild 46 seconds pic.twitter.com/jIHQg0G4qU

At first glance, it appears to be a typical morning in suburbia. Our hero, “Happy,” cheerily calls out “Good Morning!” as a neighbor jogs past.

“I need to wash my car,” he remarks to his wife offscreen as he places his coffee cup on top of the hood and unlocks his car. He is blissfully unaware of the danger that has just crossed the street behind him.

As his wife appears on the screen, toting a pet carrier, a low yowl can be heard. Suddenly, like a bobcat outta hell, a feral feline pounces onto the woman’s backside, shrieking like a banshee.

The woman understandably freaks out and attempts to get away from her butt-biting ass-ailant.

As she tries to maneuver between the vehicles in the driveway, still grasping the pet carrier, she screams:

Anyone in the same situation would run. Clear in the opposite direction. But Happy doesn’t run. Oh no. Happy turns around, heads straight into the path of danger, and rips the ragy beastie right off of his wife.

And all you single ladies? Heed tweeter @berenz98 when he says:

Do not settle until you find a man who will rip a bobcat off you and yeet it across the lawn at 8 am.

Happy holds the bobcat up in the air, Rafiki-style, and it takes him a second or two to process what he is seeing. But once he does, that kitty better look out.

He then proceeds to get rid of it in the quickest way possible, by chucking it clear across the lawn. OMG.

Unsurprisingly, it does exactly what you would expect it to. It lands on its feet. 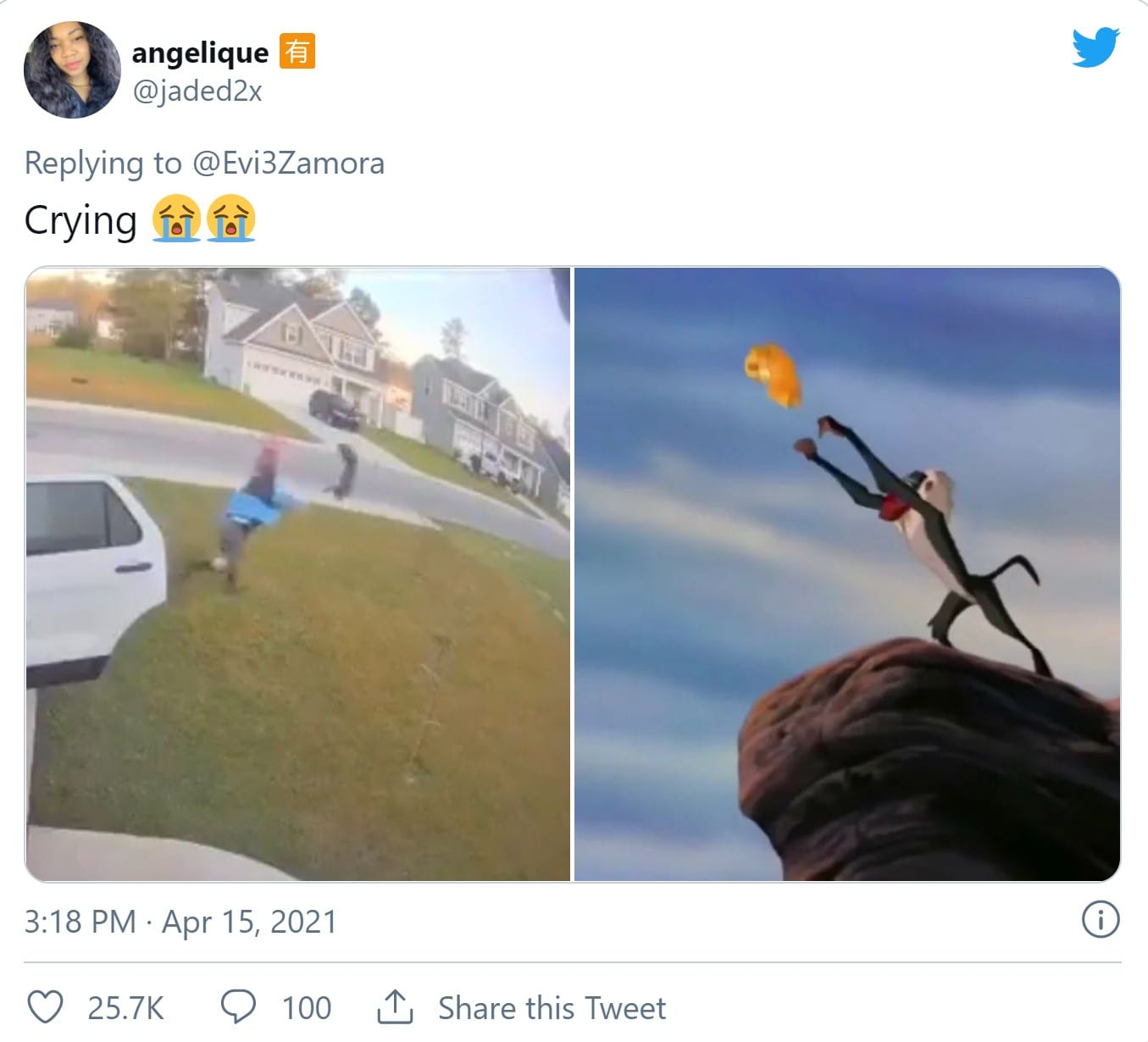 By this point, the female jogger has returned and she too gets in on the action. The man shouts at the bobcat to “Get out! Get out! Get out!” while his sidekick runs towards the animal, screaming, “Go! Go!”

The cat runs back and underneath the car. And Happy has had just about all he can take. Suffice it to say, he is no longer happy.

In the span of 37 seconds, Happy turns from the mild-mannered friendly neighborhood man into a wildcat-killing cursing machine.

And that little kitty? Better be afraid. Very afraid. Cuz he’s not taking any prisoners.

Happy runs after the feline, brandishing a hand-gun, yelling at someone off-camera to:

“Watch out! There’s a bobcat attacked my wife.”

And this my friends, is where the video ends.

So what happens next?

Thankfully Twitter doesn’t leave us hanging. Tweeter @Evi3Zamora updated her post to add that Happy does, in fact, kill the bobcat. Additionally, he and his wife received rabies shots because the wildcat was rabid.

The guy TikTok page got taken down cause of the video but, happy and his wife is okay they got they’re rabies shots and happy ended up killing the bobcat. If anyone wanted an update!!

Commenters had a lot of thoughts about what went down in kitty-town.

Many of them doubted the validity of the claim that the cat was actually a bobcat.

It was not a bobcat. It's funny to read responses here.

They even went so far as to suggest that the cat belonged to the couple and hero husband removed it from the carrier and threw it. Yeah. No.

Ummm it looks like she had the cat in the carrier they both met at the back of the van and he got the cat out and he threw the cat. Wtf

Spoiler alert: it really, really was a bobcat.

The Pender County Sheriff Department put out a statement on their Facebook page confirming the fact.

Other commenters were disturbed at the way Happy manhandled the man-eating feline, asking:

“Am I the only one disturbed by the way he threw the cat?”

However, the cat wasn’t the only thing people were worried about. Let us not forget about the brownies.

Not one damn person concerned for the brownies? Smh cmon

Which I’m sad to report, were lost in the fight. May they rest in pieces.

I thought about that after the 3rd time watching the video, because I noticed he had the top of the dessert pan still in his hand when he did the Bobcat toss.

Then I watched the video a 4th time, hoping that he put the dessert in the back seat.

But no, it was lost in the fight. pic.twitter.com/owPaivBOAs

As to why the cat attacked the wife? It is generally believed that she must have been carrying a small pet in the animal carrier. And it attracted the attention of the wildebeast.

Wife – *gazing out the window and remembers her past* pic.twitter.com/uWaWECYxTr

As for Happy? He’s just won brownie points. FOR LIFE.

My guy just won every argument with his wife for the rest of their marriage.

“Remember that time I pulled that bobcat off you? Mmhmm. YOU take the trash out. “

I’m not gonna lie, if I did this, I’d wake up my wife in the middle of the night about once every two weeks and say:

“Baby… Remember that time I shotputted a baby tiger for you?

And just in case you’re wondering if bobcats tend to attack humans – they don’t.

Conservation biologist Imogene Cancellare took to Twitter to explain a few feline facts. She says that “bobcats do not normally seek out humans,” and are “defensive animals” not “offensive.”

But, bobcats don’t normally seek out humans. Most interactions we hear about are with cornered animals found in buildings, or when pets are attacked. Bobcats are intense, loud, and obnoxious, but they are defensive animals, not offensive animals.

Experts recommend that if you do encounter a bobcat, you should back away slowly and call animal control.

All we know is that in the event we ever meet up with a rabid bobcat? Happy is definitely the guy we want around.

Now that Christmas is out of the way, the stores are already stocking up on Valentine’s Day gifts- they sure … Read More

Vodka Ice Pops Are At Costco And Su…

These Butt Cleavage Leggings Are Ca…