First, there was Happy. The heroic husband who yeeted a rabid bobcat across the lawn in a valiant attempt to rescue his wife. And just in case you didn’t think that was Wild Kingdom enough for you, let me introduce you to Hailey.

Hailey is a 17-year-old girl from Bradbury, Calif., who courageously took on a mama bear in the name of love.

For her dogs. Because dogs are the goodest boys and girls on the planet and deserve ALL the love. And rescuing, apparently. From a brown Mama bear. WITH cubs.

The 23-second video of “Girl vs Bear” was captured on a home security camera and has shot to internet fame where it has amassed over 44M views.

The video opens with a mama bear and her two cubs casually strolling across the top of a brick retaining wall dividing two properties. 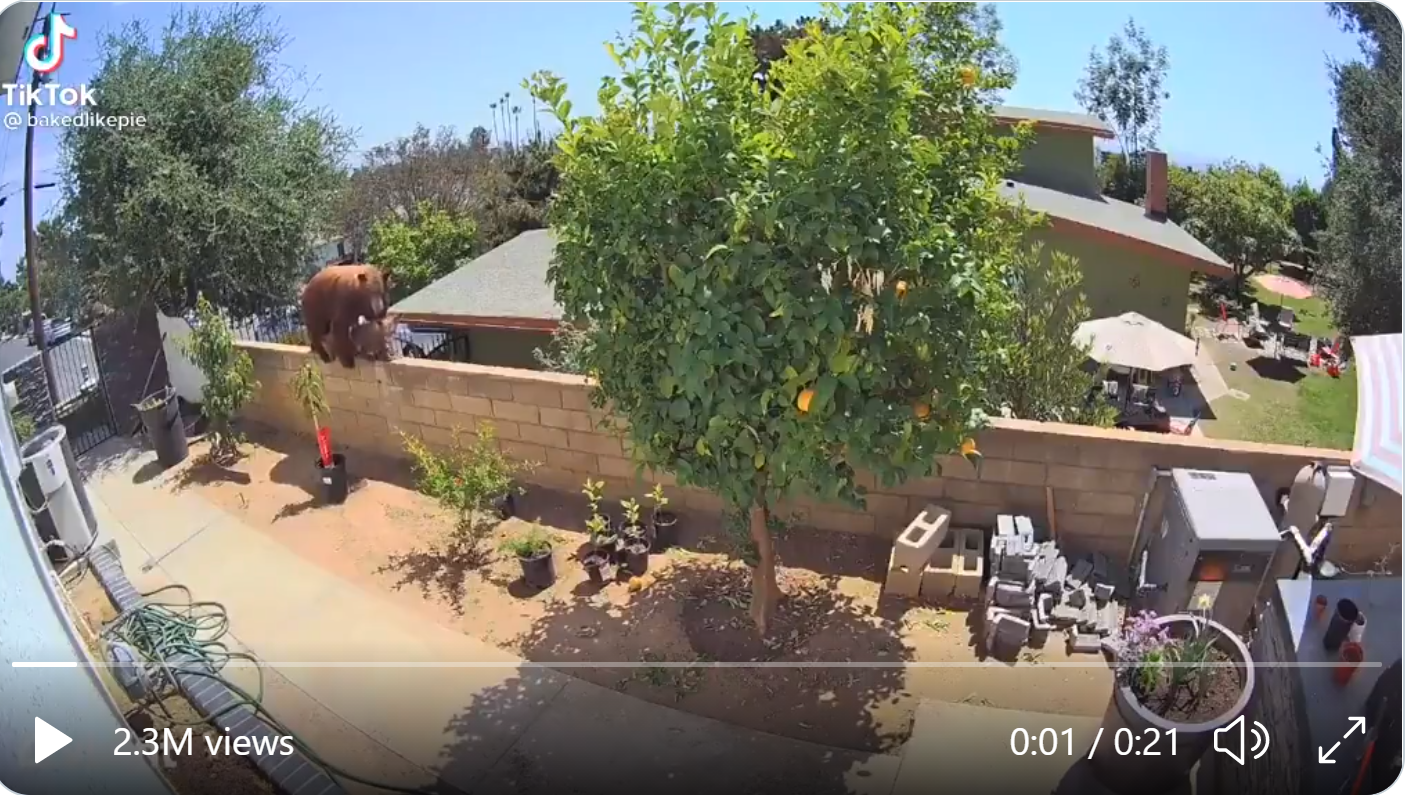 On one side of the wall? Calm, peace, and tranquility. On the other side? A pack of pint-sized dogs and their bigger, fearless, possibly dumber, leader, aka: the black dog.

As Mama and her cubs amble across the wall, the pack of pooches catch wind of the intruders and start barking like crazy.

Black dog goes after big Mama, not once but THREE times because clearly he is suffering from delusions of grandeur and thinks that he can actually beatbox a bear. 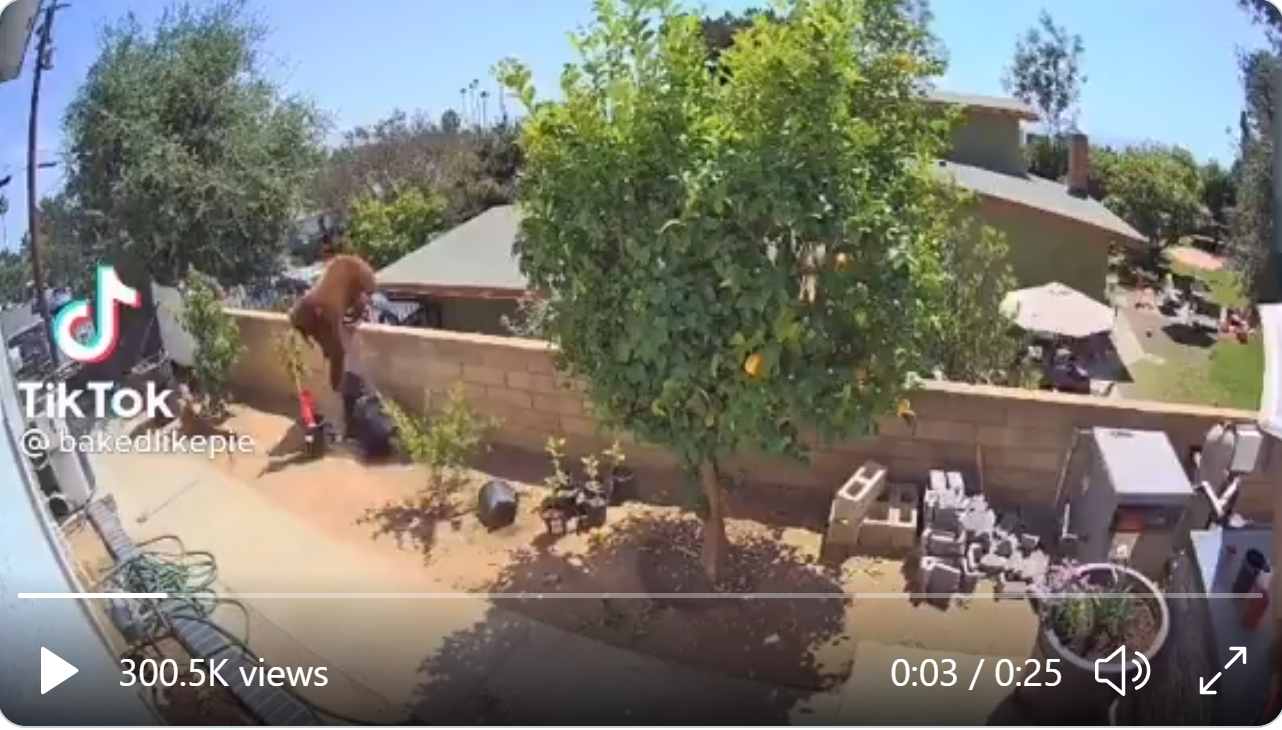 Meanwhile, the little dogs are busy running off the cubs.

Mama isn’t having any of it and crouching down, she swats repeatedly at the dogs.

It is at this point that our heroine, Hailey, charges in on the scene, screaming like the warrior going into battle that she is.

As the bear grabs hold of one of her little dogs, Valentina, Hailey doesn’t even hesitate for a split second before she is literally shoving the bear off the wall with her “bear” hands. OMG.

Home girl came running at 80mph and shoved a fUCKING BEAR MAN AT THAT POINT HELP THE BEAR- pic.twitter.com/ctdLcOOFll

By this point, the bear has had about all she can take. She scrambles back onto the fence and flees the scene while Hailey scoops up the last-standing chihuahua and beelines it back into the house.

In the span of 23-seconds, Hailey goes from typical teenager to bear battling battleax. And if that isn’t bad-ass, I don’t know what is.

(You can view the video with the original sound below.)

This is the video of her shoving the bear with the actual sound & it’s just as chaotic omg. Y’all need to HELP THE BEAR! ?? pic.twitter.com/8xTmf0qPVY

Hailey’s cousin, Brenda, first shared the CCTV footage on TikTok with the added bonus of overlaying Kreepa’s “Oh No” as its soundtrack.

She captioned it with:

My cousin Hailey yeeted a bear off her fence today and saved her dogs. How was your Memorial Day?! (WTF?!) #ohno #badass #brave #fight #bear

What did you do for Memorial Day? I’m guessing it wasn’t yeeting a bear.

My cousin Hailey yeeted a bear off her fence today and saved her dogs. How was your Memorial Day?! (WTF?!) #ohno #badass #brave #fight #bear

In a follow-up TikTok video Hailey explains what happened:

I live in the mountains so this is actually really normal and it’s summer so they always come now. So This is our garden/back yard area and they start barking, our dogs, and I thought they were just barking at a dog because they always bark at dogs and squirrels or whatever.

I go to tell them to stop and when I look over there to see what they’re barking at, I’m like ‘that’s a funny-looking dog.’

By the time I get there, the bear is literally picking up one of my dogs.”

“I go over to the bear, I look it in the eyes and the first thing I think to do is push it. Push a bear, push an apex predator. To be honest, I don’t think I pushed her that hard. I just pushed her enough to make her lose her balance, so she dropped my dog and I ran out of there.”

The first thing she thinks is to PUSH A BEAR. I gotta say, I doubt that would be my first thought.

Oh yes, she did, in fact, just run up and punch it.

And I’m with Kathy, I call dibs on being on Hailey’s team in the event of a zombie apocalypse.

Commenters on TikTok are clearly impressed with her skills. The original post has received over 7.9M likes and 166K comments.

And some commenters now have dogs that are on the hunt for a love as deep and true as Hailey’s.

As for Hailey and her pack? They’re all fine. She suffered a sprained finger and a scraped knee and a couple of her dogs were “a little scratched but OK.”

She also doesn’t recommend trying this at home.

In an interview with KTLA, she said:

“Do not push bears. Don’t do what I did. You might not have the same outcome.”

The family said this isn’t the first time seeing a bear or other wild animals around their home in Bradbury since moving there in February. Hailey’s mother, Citlally Morinico told reporters that bears are usually spotted in the neighborhood around two to three times a week.

According to the National Park Service, your chances of being injured by a bear are approximately 1 in 2.7 million.

At one time, the California Department of Fish and Game stated that bear attacks are rarer than Big Foot sightings.

If you do happen to come across a bear in your yard they recommend the following:

All we know is that if we’re ever up close and personal with a bear, forget the bear spray, we’ll take Hailey instead.

An Open Letter to a Police Officer&…

If You’re Using The Cry-Laugh…

For the past few weeks, I have largely ignored the battle royale brewing over on TikTok between Gen Z and … Read More