Filter Free Parents
Home Uncategorized Financial Infidelity Isn’t Funny. So Why Do We Keep Joking About It?

A few months before I got married I was in a summer sociology class, and I received some advice from an older than average student. He told me to keep a separate bank account. He was basically advocating for financial infidelity.

“You can’t let her know how much you actually make,” he said.

“She’s going to take your money. That’s what they do. Cash your check, and put a couple hundred in YOUR bank account, and put the rest in the joint account. That way you can have some play money, or whatever.”

He winked. I was 22-years-old, and all I could think about was my father. He died divorcing his fourth wife.

He was pretty good at hiding his finances, too. Only he wasn’t stashing money away in some bank account. He was hiding debt.

When my parents got divorced, all that debt, all those credit cards and leans he’d taken out on the house, it all came to the surface. My mother was on the line for a lot of that. I can still remember her sitting up at night after she got off from her second job cleaning houses, her left hand in her blond hair, right hand working a calculator, bills fanned out along the dinner table.

And I know what you are thinking. You are wondering if I took that dude’s advice or if I followed in my father’s footsteps.

And as far as I know, she is honest with me. But the sad reality is, a lot of couples don’t make those commitments. 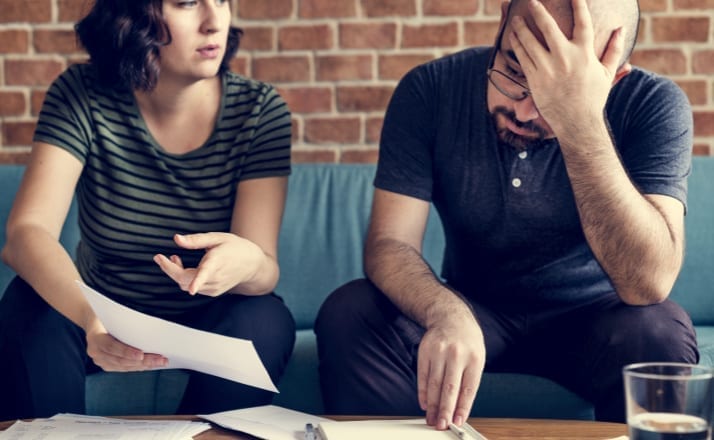 Financial infidelity is a real problem. Here’s what you may not know.

The few academic studies there are about financial infidelity have estimated that as many as 41% of American adults admit to hiding accounts, debts or spending habits from their spouse or partner.

Ted Rossman, an industry analyst for CreditCards.com told NPR “It does seem that financial infidelity is on the rise.” That company’s recent survey found that millennials are nearly twice as likely to hide money or accounts from partners than other generations.

It’s easier to conceal, Rossman says, because of technology:

“You can sign up for the account, you can get the statements, you can do your spending — all without anything showing up in the mail.”

I don’t want to point out the obvious, but 41% is a pretty high number, and anyone married really should look at that, and take a moment to reflect.

Women can be just as guilty of financial infidelity as men.

I used to work at a hardware store, and I can remember walking in on a woman in the break room cutting up about a dozen credit cards. When I asked her what she was doing, she started crying. She told me that her husband didn’t know about them, and that she couldn’t stop.

Who knows how much debt she had on those cards, and who knows what they were used to buy. She obviously had a problem, and at some time, and place, it was going to come out.

Typically it often involves hiding compulsive shopping or gambling debts. In other cases, a spouse might siphon off cash from the family’s funds for a secret purpose, like that man who gave me the advice to keep a separate account. Either way, when the deception is exposed, it often evokes feelings of betrayal and loss of trust that can lead to the dissolution of the relationship.

There is now financial therapy for couples because financial infidelity is on the rise.

Megan McCoy, a professor at Kansas State University who specializes in financial therapy, told NPR that

“It’s hard to realize someone could be so fake to you, someone you thought you understood and could read. Money signifies safety in retirement or a child’s college education, and that’s why money fights are nastier and last longer.”

Someone reading this article, has most likely experienced financial infidelity in a partner, someone they are close with, or even themselves.

Hiding purchases from your spouse has serious ramifications, and it’s important for us all to take a moment and realize that hiding money isn’t funny. It’s actually very serious, and can result in broken trust and years of rebuilding.

In many cases it ends in separation and even divorce. If you are engaged in financial infidelity, come forward. Tell your partner. The sooner the better, before it becomes something your marriage cannot survive.


Woman Gets Stuck On Gym Equipment; …

According To A Survey – The &…

Leave the six-packs for the fridge dads! That one-pack you’re sporting? Is HOT, HOT, HOT. At least according to 75% … Read More