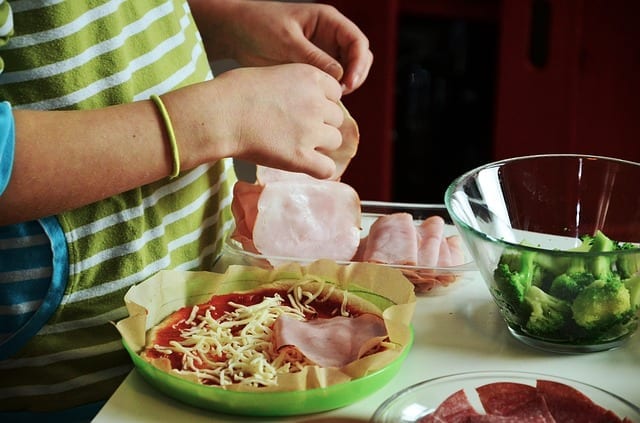 “You can’t be excused from the table until you clean your plate.”

“If you don’t eat your broccoli, no dessert for you.”

“There are kids starving in China.”

Commands, bribes and guilt trips are still common methods of getting kids to eat the food on their plates. The approach to feeding children is different for every family, and it can be tricky, especially with picky eaters.

Growing up in my house, you could balk all you wanted about what was served at mealtime but if you didn’t eat what mom made, you left the table hungry. It didn’t feel like a control method, that’s just the way it was as the child. She made things like tuna casseroles, and baked chicken thighs served with canned peaches and canned corn. Sometimes we got take-out Chinese or ordered pizza.

We always had candy in decorative dishes placed throughout the house. In the cupboards were Lay’s potato chips, Little Debbies, you name it – we had it. Maybe because it was so readily available, but my sister and I rarely over-indulged in that stuff. Sometimes I’d eat too many mini Reese’s Peanut Butter Cups at Christmas but it didn’t turn me into a sweet tooth fanatic like my mother.

When it comes to kids and eating habits, it can either be a power struggle or not. Maybe you and your kids fall somewhere in between. Everyone has a different style, but problems seem to persist when parents are overly controlling or overly permissive.

Directly correlated is the bigger problem of a childhood obesity epidemic we face in America, which has more than doubled in children and quadrupled in adolescents in the last 30 years. It’s estimated that 21% of children between the ages of 2 and 5 years are at or greater than the 85th BMI percentile, making them more likely to be obese adults.

Many people struggle with eating disorders, such as bulimia and anorexia, using food as a form of control or as a coping mechanism, skills we learn early in life.

Do you know what your kids eat in a day?

For the most part, you can witness what your child is eating at home because you are in the same house, but when they are at school it may be a different story.

According to a 2014 study by Johns Hopkins Bloomberg School of Public Health, 6 in 10 students put a vegetable on their tray, but only a quarter actually ate a single bite. The thought was that if young children were choosing healthy items like fruit and veggies, that they would eat it. Not so.

Researchers observed 274 children in K-2nd grades in 10 New York City public schools as they selected from the offerings during one lunch period when a chicken-and-vegetable entrée was on the menu. They watched to see whether the 6-to-8-year-olds chose a fruit, vegetable, whole grain, low-fat milk and/or a lean protein.

They found that while 75 percent of the kids chose the lean protein (the entrée), only 58 percent chose a fruit and 59 percent chose a vegetable. And among those who put the various types of food on their trays, only 75 percent took even a single bite of the protein, while only 24 percent ate a bite of their veggies.

Another study by researchers at the University of Arizona involving a daily photographic diary to gather accurate dietary intake showed that while some photos were taken of full meals, there were photos missing of snacks. There was a perception that a snack didn’t really count because it wasn’t a meal, forgetting that snacks can be highly caloric.

Do you empower your kids to eat healthy?

Last year, it was revealed that one-third of kids eat fast food on any given day and 12 percent of their calories come from fast-food restaurants. It’s easy, fast, cheap and tasty, but obviously not healthy. It can be frustrating for parents who rush home from work to provide healthy meals and your child won’t eat it because they’d rather have fast food.

One idea is to do the prep work along with your child the night before. It doesn’t need to be complicated or overly time-consuming. Teach basic cooking skills, provide a variety, introduce them to new foods, send ‘em to summer camp to learn new cooking skills. They’ll will eat what they like and won’t eat what they don’t.

At the grocery store, 78 percent of all shoppers report that they are interested in reading nutrition labels, paying more for organic products, or looking for locally-sourced products. Maybe you are part of that percentage because you see the value in teaching decision-making skills at the store.

What is your approach to teaching kids healthy eating?

Eating is not the same habit like cleaning the house or brushing your teeth. Yes, it’s a chore, but it involves creating a positive environment that sets the tone for today with the results manifesting in 20 years from now.

We eat for pleasure, for health, to stay alive. The cupboards shouldn’t be a free-for-all buffet like they were at my house growing up. But our dinner times were good – an opportunity to sit down together as a family, talk about life, and enjoy nutritious meals.

More and more parents, especially moms, are going to back to school to advance their careers while also working 40 hours a week, so I get it. My mom was a busy working nurse, but she loved to cook and so do I. I was entrusted to make my own decisions regarding food and I’d say it has served me well today.


People Are Getting “Creative&…