Filter Free Parents
Home Mom Life Humor How To Care For a One Year Old: With Instructions Interpreted By...

I was just digging through some old photo albums today and this folded up note fell out.  It’s a six page list of ‘guidelines and explanations’ (my own obnoxious words) that I wrote up for my mother and father-in-law when they offered to care for our daughter so that I could take a once-in-a-lifetime ten-day trip to Italy with my mom.

This was eight years ago.  My daughter had just turned one and we had just moved into a new house the week before. 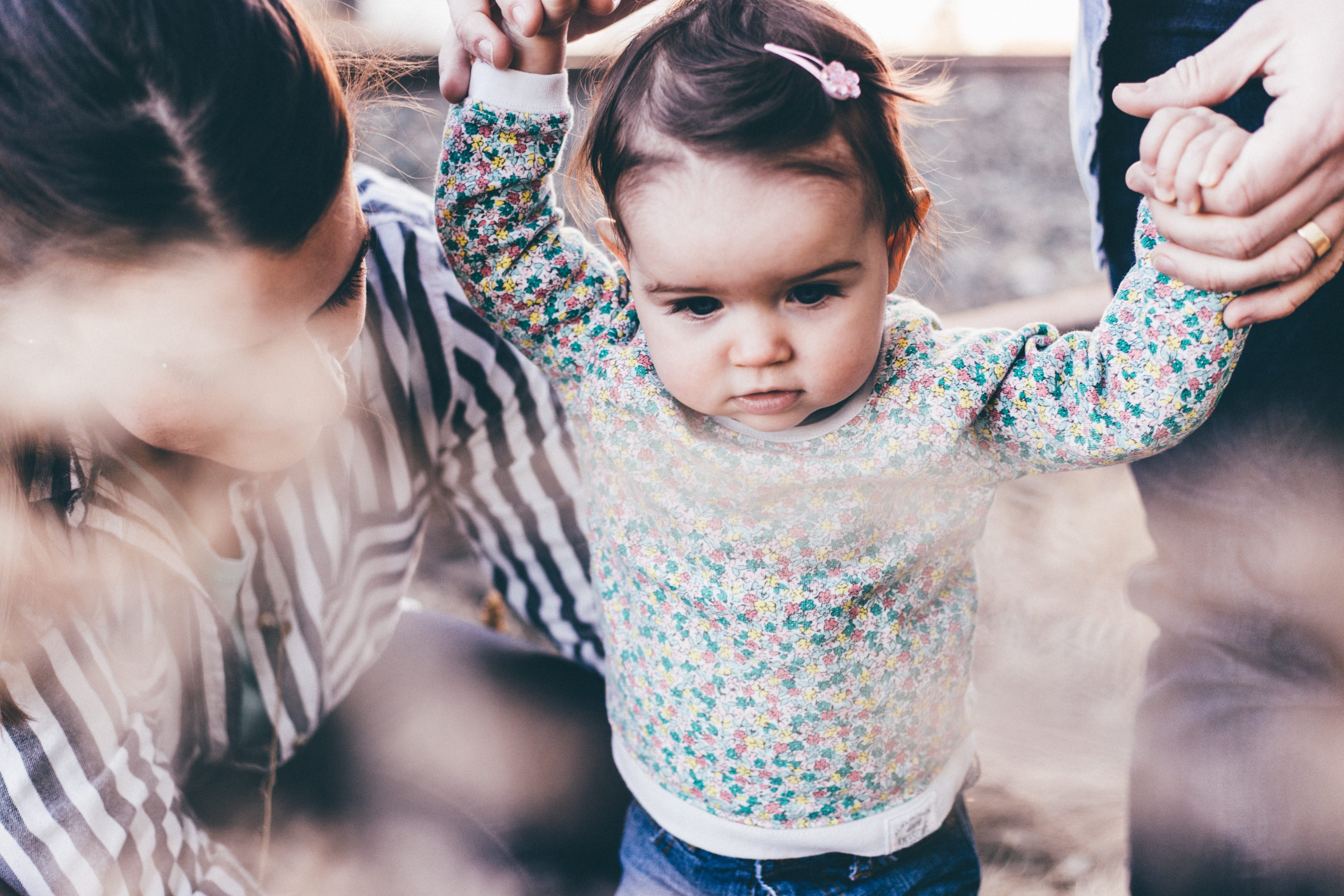 There were boxes everywhere and the normal craziness of living with a one year old.  Even with all that, my in-laws were kind enough to volunteer to fly from Arizona to Seattle to watch her so that my mom and I could go on a food and wine tour across Italy.  I am still grateful that they gave us this gift of their time and now I am even more grateful that they didn’t either bolt for the door or laugh in my face when they saw what follows.

To ‘help’ them out, I put together what I thought was a helpful, information-packed list of all of the critical need-to-know items that they (and my daughter) would need to survive the next ten days.  As I read it now, eight years (and a second kid) later, I realize how thoroughly amusing this instruction sheet must have been to two intelligent, loving parents/grandparents who already raised two boys of their own.

What follows is the body of the note and what I can only imagine was going through their heads as they read it. 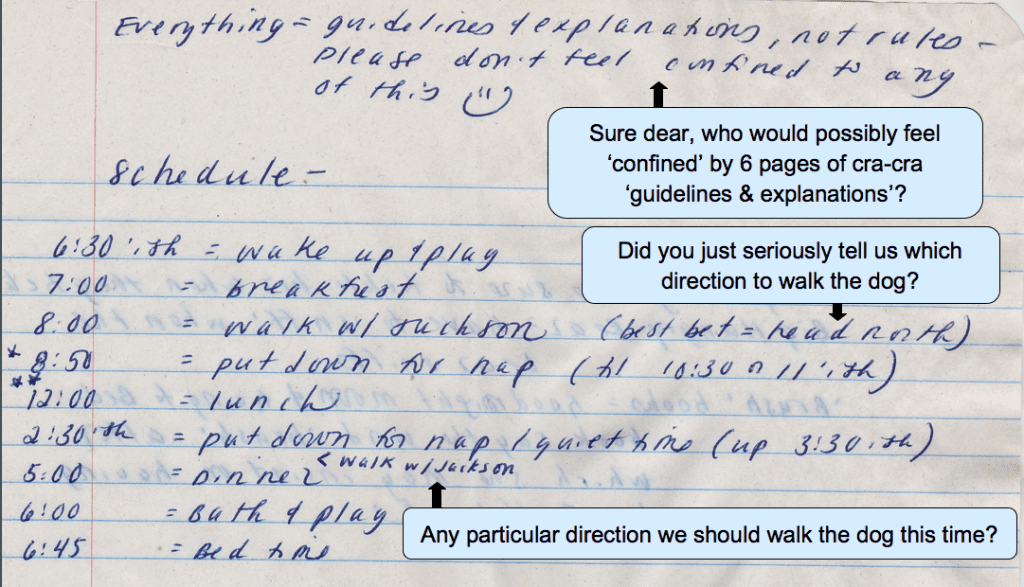 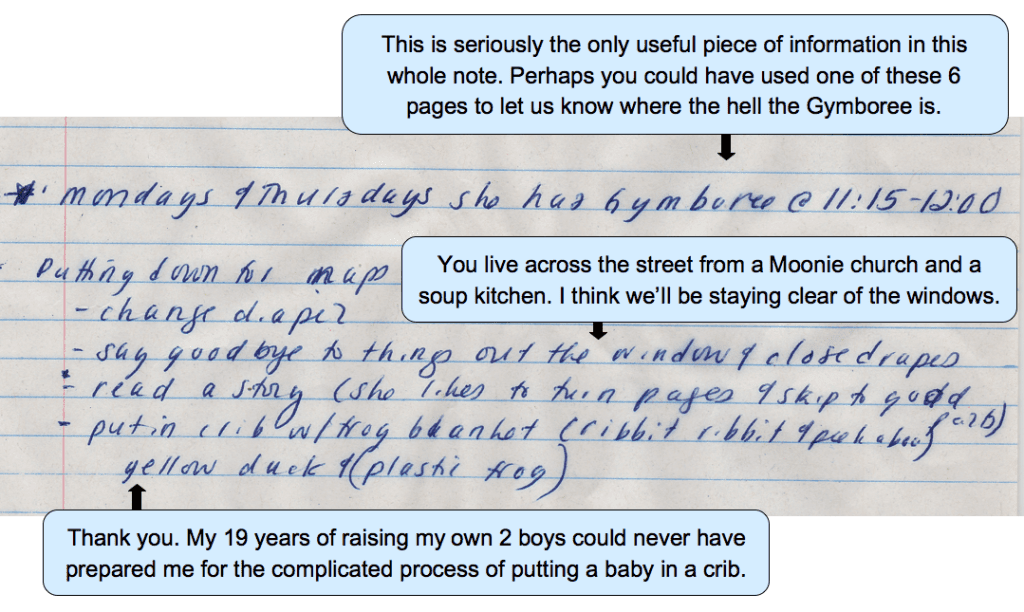 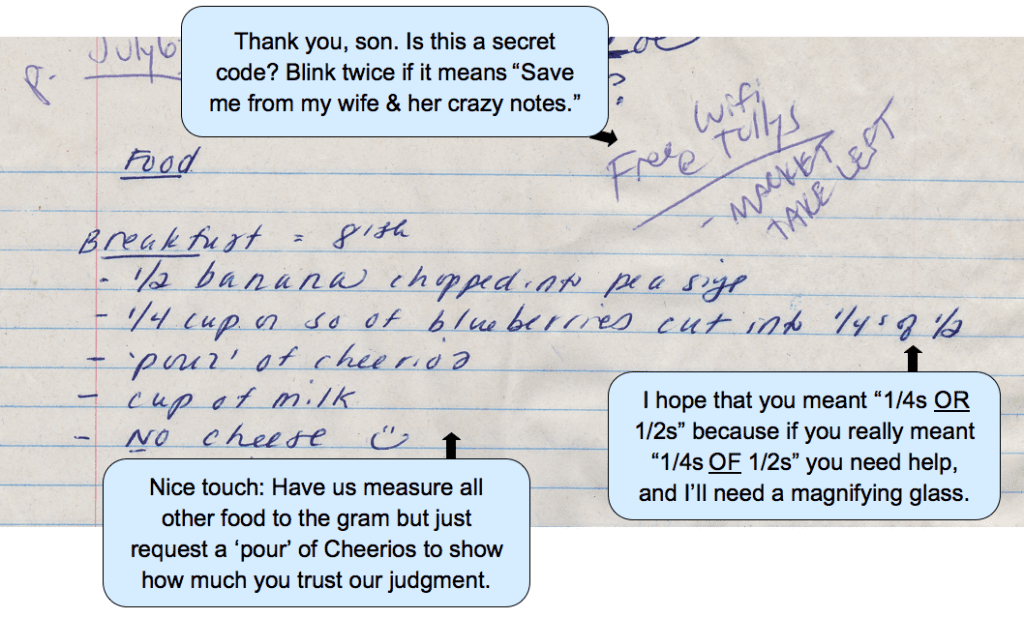 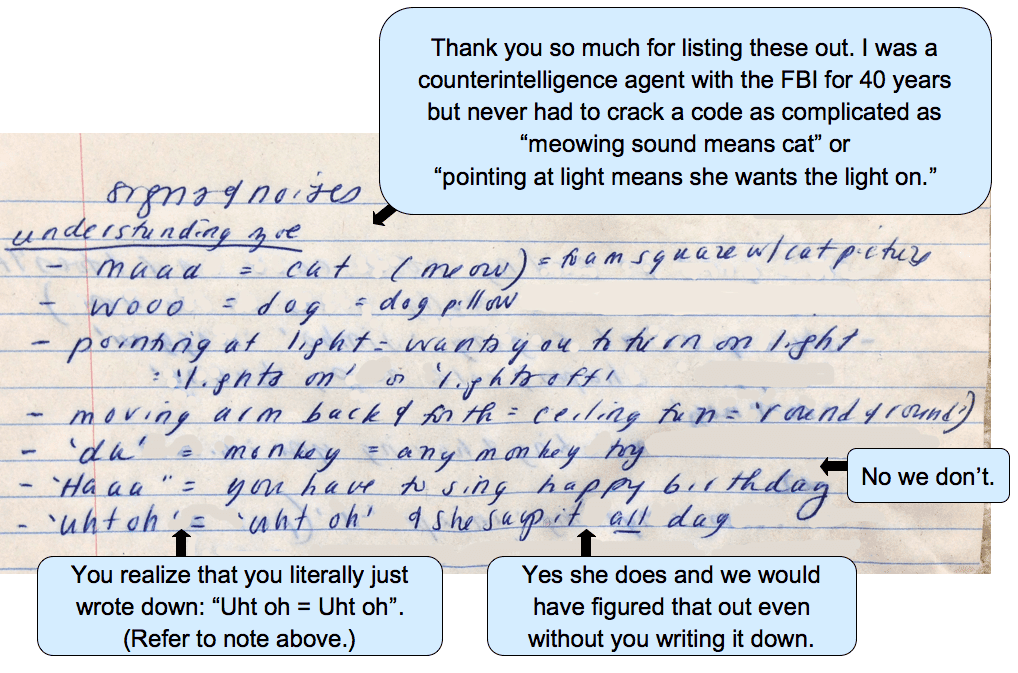 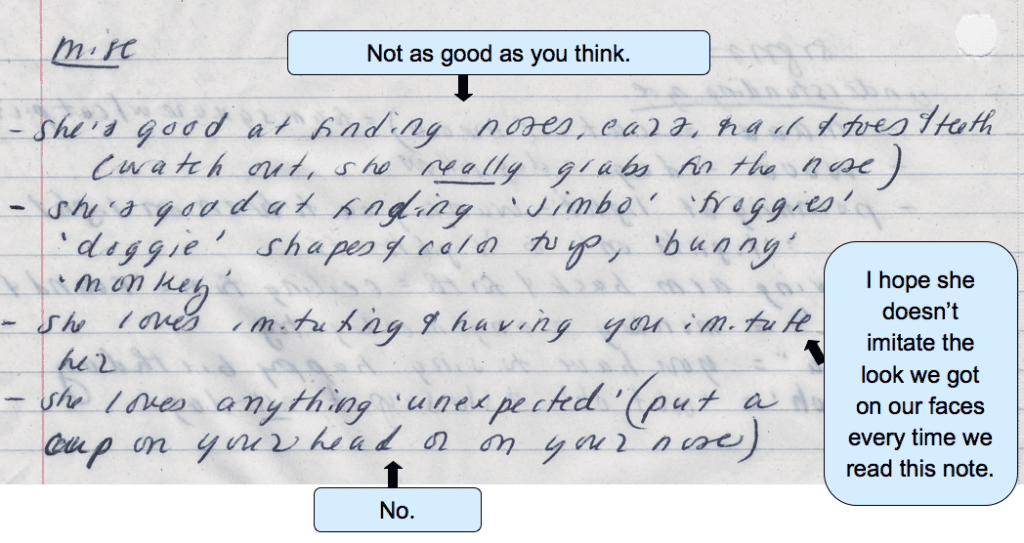 I share this with all the moms out there. It’s for the new moms who are preparing to write your own lists of ‘guidelines and instructions’ for your first time away from your baby. And it’s for the moms like me, with older kids, but who can still remember that first time we handed off our sweet babies as we ventured out of arms reach for the first time.

Save those notes. You’ll look at them some day and they’ll remind you of how far you have come…and that you should probably step it up a notch for your in-laws’ Christmas present this year.

Susanne Kerns is a Writer and Marketing Consultant living in Austin, TX. Her stories have been featured in several parenting anthologies, including the recently released, “But Did You Die?” You can find her writing on many popular sites, including her own blogs, SusanneKerns.com and at TheDustyParachute.com. Susanne also co-produced this year’s Listen to Your Mother show in Austin.
Follow her on Facebook to see why she’s frequently featured on Today Parents’ “Funniest Parents on Facebook” round-up.  She’s also on Instagram and Twitter.


Woman Goes To Hospital Thinking She…

Girl Imitates Her Mom Working From …

Working from home often appears more glamorous on paper than in reality. Sure, the commute is short. The coffee supply … Read More

Whale-watching tours are a popular activity on people’s bucket lists. People spend upwards of $100 or more to get up … Read More