Suddenly they have their own ideas about what they want and when they want it, and they are incredibly dedicated to their own little whims. If you have ever had the opportunity to care for a toddler you will know that this is putting it extremely mildly. A toddler who wants something that you either don’t understand, or are not able to provide is very much like a tornado, and you my friend are a trailer park.

Heading into the land of toddler myself for the fourth time, I thought that a translation guide of sorts might be helpful.  So here we go:

Remember in College when you were insanely dedicated to a cause and decided that you would join your fellow protesters in a sit in?  Nothing, and I mean nothing was going to deter you from making sure your message was heard and that change was implemented.  This is now your toddler.

If you plan on accomplishing anything on the day that these words are uttered, clear your schedule and make some calls, because you are not going anywhere anytime soon.  These words are usually used when it is time to leave the house and socks, shoes, or possibly pants are required.

These words are also very popular when trying to buckle a toddler into a car seat when they will suddenly decide to “plank” and use their super human toddler strength to prevent you from doing up the buckle.  These words are almost always used when you have to get to work, or you have an appointment which you are likely already running late for.

When a toddler says,“I try it.”

These words will be used during mealtimes. They mean that your toddler is now going to abandon their own plate, which contains the exact same food that you are desperately trying to eat yourself, and will now proceed to eat every scrap of food on your plate.

For some reason, toddler logic dictates that your food is better than theirs, even though it is exactly the same. It’s best to just develop a taste for cold, tiny bites of food because unless you hide in the kitchen to eat, you may be trading plates for a while.

When a toddler says,“I no did it.”

These words will often be uttered when you have been out of the room for a few minutes.  It absolutely means that they did something….the trick is what is it?  Sometimes it will be obvious because there will be a puddle of something or the writing will literally be on the wall.

However, if it is not obvious, do not assume that nothing has happened.  Search high and low until you figure it out because this is one of those times when weeks from now you will be wondering what on earth that smell is, only to discover half a banana crammed into the back of the toy garbage truck.

When a toddler says “No worry mommy. I clean it.”

These words are almost always used when you have been out if the room.  This one is a bit more alarming.  It’s nice that they have taken ownership over whatever havoc they have caused, however they have also attempted to clean it up.

So, what was the mess?  And what exactly did they “clean” it up with?  This often involves a defective sippy cup and a throw cushion from your couch. Or, worst case scenario, a diaper and an afghan…probably knitted by great grandmother and irreplaceable.

When a toddler says,“I big helper.”

This is a tough one because it is so darn cute, but it’s a trick. Do not be fooled by the big innocent eyes or angelic smile. This does not mean they are going to help you.

This statement means they are going to, under the guise of helping you, do absolutely everything in their power to prevent you from getting the activity done. If you give in to this request, as I foolishly do at least once day, pour yourself a coffee and just abandon all hope of getting anything accomplished.  Oh, and make sure you allow for time to clean up whatever messes will now be caused by your “big helper.” 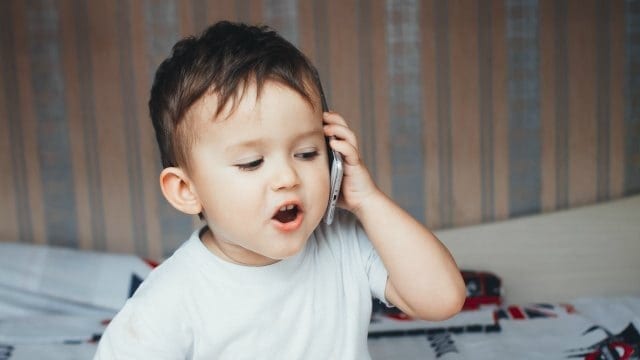 When your toddler says, “I hungry.”

Brace yourself. You are about to be told “No” to every single option of nourishment that you provide and even though the toddler could actually be hungry, there will not be a single food item in this world that will be acceptable. If there are older children in the home, your toddler will also be aware that you have cookies. You know that sit in from College?  You are about to meet the “sit in” King or Queen.

When toddlers say, “Mine.”

Toddlers are only capable of understanding their own needs. So this statement could refer to a toy, a toilet brush or even your left shoe. It doesn’t have to make sense. In fact it often doesn’t.  Just assume that everything they see, touch, hear or smell belongs to them in their little world and roll with it.

When toddlers say, “It so pretty.”

This rarely means that you will find whatever is happening “pretty”.

It could mean that those paints and crayons you thought you had hidden have been located and in the time it took you to pee, your little artist has provided you with a custom-made mural in your living room. This mural will likely include walls and your couch.

It could mean that somehow your toddler has found a pair of scissors (even safety ones will cut hair) and given themselves a “pretty” new haircut.

Or, it could refer to the fact that your toddler located a tube of lipstick in your purse and has given themselves a “pretty” new makeover.

It could also refer to the fact that you have thirty seconds to get out the door for an appointment and your toddler has removed every scrap of clothing you put on them and opted for a diaper and a tutu, a pair of your underwear on their head and one glove instead….they may combine this with the lipstick make over.

When your toddler says, “I wuv you.”

No translation required here. Once these words are spoken, usually by a sleepy toddler after the tenth story and following a day filled with the contents of this list, you will melt.

Nothing that happened that day will matter in the slightest. In that moment you will be filled with joy in the knowledge that this stubborn, messy and infuriating little person is your little person. Your amazing little person who is growing up before your eyes and finding their own unique ways to explore the world every day.

And that, is amazing. Also, toddlers are still pretty squishy.

This post originally appeared on Is That Chocolate Or Poop?

In One School, More Than Two D…

No matter how many times you ask your kids, “do you have to go to the bathroom?” before you leave … Read More