There’s an endemic condition going on. No, we’re not talking about obesity or any viruses. We’re talking about the lack of coping skills and emotional intelligence in the general population.

Think about the oldest generation, the ones the kids call “boomers.” They’re likely your parents’ age, or maybe your grandparents’ age.

That generation wasn’t taught to express their feelings, even though they lived through World Wars and may have even fought in them. We’ve seen how bottled up they can be emotionally, and the kind of long-term mental health damage it does. Needless to say, no one wants that for their kids.

One of your duties as a parent is to prepare your child for all the things in life — the good and the bad — including losing loved ones.

But talking to kids about death can be daunting. How should you even approach it? What should you say? To help you answer some of your questions, we’re breaking it down into general tips and specific actions for different age groups.

Be Mindful of Mirror Neurons

Before we get into the how-to, we want to remind you of a critical point.

Scientists have discovered “mirror neurons” in the brain. They’re brain cells that make us feel like we’re doing an action, even if we’re simply watching it. And many young children don’t know the difference between doing and watching, when these neurons are firing.

In short, your child is going to mirror how they react according to how you react.

It’s science. So remember, you can say all the right words, but if you don’t follow your own advice, like “It’s okay to feel sad,” your child won’t either. 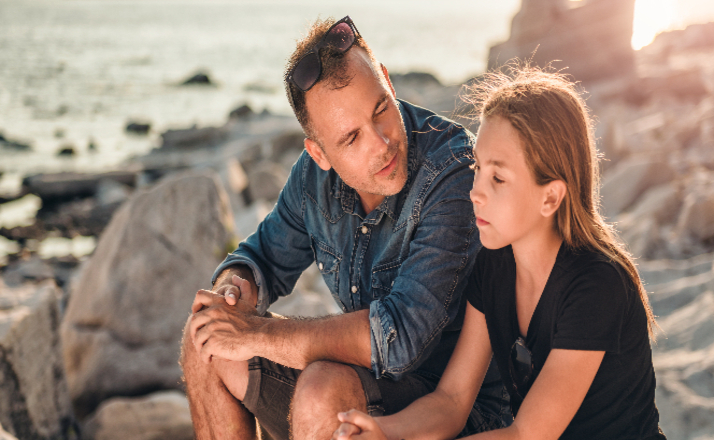 When you’re telling your child someone died, don’t say they passed away, went to sleep, were lost, crossed over, or any of those more gentle, alternative phrases.

While it seems like those would be more appropriate, they can both confuse and scare children.

For example, if you say someone went to sleep forever or fell asleep and never woke up, your child may develop a fear of sleep, thinking it could happen to them.

While it’s uncomfortable to use the stark and sad words dead and died, it’s the best way forward.

And if you needed even more reason to do so (other than preventing unnecessary anxiety in your child), there’s research that shows using the realistic words can shorten or at least help your child’s grieving process.

Tip #2: Have No Expectations When It Comes To Emotional Responses

You’ve heard of the five stages of grief. But children don’t necessarily go through those same stages, and they’re rarely in order if they do. Not only is your child grieving, but they’re also wrapping their head around the idea that 1.) death exists, 2.) it happens to everyone, and 3.) even they’re going to die one day.

It’s a lot to process. So if your child reacts in a way you didn’t expect when you tell them the news, don’t feel like you did a bad job.

All reactions to grief are valid reactions. Use this fact to assure your child it’s okay to feel whatever they’re feeling right now — even if it’s nothing.

(P.S. — If they’re feeling nothing, it may be an information overload or a sign they don’t understand what happened yet.)

There’s a difference between explaining death to a preschooler, a 3rd grader, and a 6th grader.

It has nothing to do with how good a parent you are or their coping skills, but more about what their brain can developmentally understand. Each age group has its hurdles to get over when it comes to understanding death, which means you may have to have a more in-depth version of the conversation each time someone you know dies.

Explaining death to those under age five can be difficult. Their brains aren’t developed enough to understand the idea of “forever” yet — and whether forever is good or bad.

When you talk to very young children about death, be very clear that the person is not coming back. They are gone and no longer living or breathing on earth.

It sounds harsh, but it’s the groundwork you have to lay for children to understand the idea of permanence.

You’ll likely have to keep answering questions and reminding them the person is gone, which can be detrimental to your own grieving process. No one said this was going to be easy.

Once they’re five or so, they can start wrapping their head around the idea of permanence or “forever.” But that doesn’t mean the idea of someone never coming back is any less confusing or upsetting.

It’s appropriate to talk about how death is natural and how everyone is going to die at this age — but in small doses.

Your child has likely heard something death-related already at school, and hopefully, come to ask you about it.

If there’s a memorial and you’re bringing your child, give them some feeling of control in the situation. Whether that’s helping you pick out the right cremation urn, a poem or special memories to share, a flower arrangement to display, or simply deciding what they want to wear to the service.

The idea that we all die makes us (even adults) feel helpless and out of control, so empowering them in some way at this time can help them cope.

How to Talk to Kids About Death: Start Slow, Be Clear

You don’t have to introduce the idea that everyone dies, life is fragile, and they’ll never see Grandma again all in one conversation.

There’s no one right way to talk to kids about death, but listening, being empathetic, and talking about your feelings will help.

Have you done your best and are still struggling, or want to prepare your child for when this conversation inevitably arises? Look into emotional intelligence courses for kids online. Using outside resources when needed can help your children (and you) work through this puzzling time.

When you become a parent, you have plans. You intend to run your household like a well-oiled machine, keeping things … Read More

Their Daughter And Grandkids Are Mu…

As parents, our greatest instinct is to protect our children. Our greatest fear is that something horrible will happen to … Read More