Filter Free Parents
Home Mom Life Humor I Hated Gender Reveals. Then I had One.

I’m talking full blown friends and family tuxedo or tutu themed parties where the big reveal is filmed as though it’s an Oscar’s ceremony and then posted on five different social media outlets to rack up the likes and comments and then lives on forever in cyber space.

It always pains me to see the looks on the faces of the parents to be as soon as that colored confetti hits the air.

Because in that moment, there’s no hiding anything.

Either they are looks of pure joy and true happiness to which I can’t help but wonder, what would have happened had it been the other sex.

Or worse, they are split second looks of disappointment or confusion sometimes quickly covered up by fake smiles and forced cheer, or sometimes not, in which case, cringeworthy. It’s just not my cup of tea.

“I think this one’s a girl”, I said to my husband mid-way through my first trimester of my third pregnancy.

I was at the beach with our two boys while he was at work, and I had spent the morning building sandcastles and dry heaving into the ocean.

I had not experienced nausea during pregnancy before, as my first two pregnancies were exactly the same, easy for the most part, standard and healthy.

This one had been anything but, and so I thought, maybe this little one, unlike the other two, had secured the same XX chromosome.

Finding out the baby’s sex, just my husband and me, has always been one of my most coveted and memorable life moments.

When the ultrasound technician announces it during the scan, and we look at each other, feeling truly happy, and beginning immediately to picture how our family will shape and change with each new addition.

After two miscarriages, we were thrilled to be pregnant and we were eagerly looking forward to experiencing this moment for the third and final time.

Enter Coronavirus and zero guest at appointment policy, and that plan was shot. 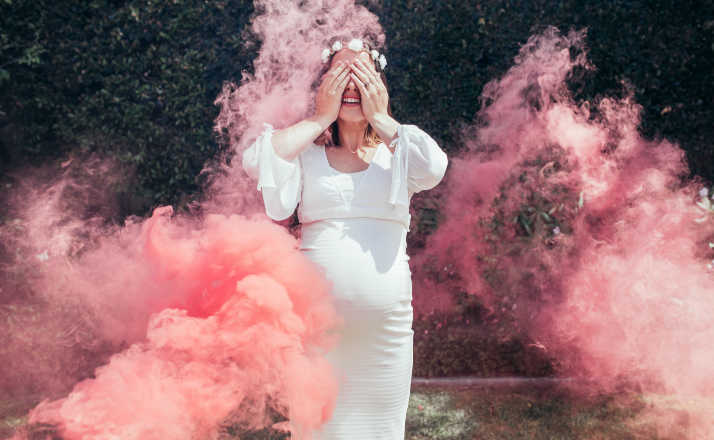 With our options limited, and frankly with little else to look forward to in quarantine, my husband and I agreed to allow my sister to get the gender information from the nurse and order a cake for us to reveal and celebrate with everyone in the family via zoom.

The zoom call set up was perfect snapshot into everyone’s lives. Our two sisters with their combined seven kids were each perched around the dinner table, and on the couch, eagerly awaiting the big reveal- all team girl.

The buzz was non-stop.

My childless sister and her fiancé had joined, observing the madness silently, sunglasses on, drinks in hand. Not surprisingly, my in-laws were having major technical issues with the zoom app.

My husband and I were with my parents and our two boys, one of which was repeatedly trying to stick his fingers in the cake.

When I cut into the cake to reveal 5 layers of solid dark blue, I was shocked.

My husband was confused, my three-year-old wouldn’t stop yelling that he wanted cake. My dad sat there in his blue for boy shirt, unsure of what to say among all of the chaos but having learned from surviving for 35 years in a household of his wife and three daughters, that “I was right” probably wasn’t it.

Having a boy is one thing. Processing that I would have three took a bit more brain power.

I needed a moment.

To let go of the image of the floral nursery I had in the back of my mind.

To think about how simultaneously beautiful and messed up pregnancy can be that had tricked me so well.

To picture my house in 8 years turned into the WWE, in acceptance. Instead, I had not only to deal with my own thoughts and reactions, but the those of the 24 people closest to me as well.

Later that evening, my husband and I argued about names, an old conversation. My sister expressed her concern that I had gender disappointment.

My best friend found out we did the reveal and was lovingly upset I didn’t share the results with her immediately.

The thing about already having two children of one gender, is that the popular opinion is not to root for a third of the same.

Especially when that would make three boys. “A little girl would be so sweet”, or “a girl would be nice to balance out the crazy.”

Maybe those statements are true, but not knowing anything different, I was actually perfectly okay, in my own time and in my own way, with adding another boy to the mix.

The truth is, I was slightly relieved. The kicker is, we don’t get to choose anyway. Just as the sky is blue, and cake is delicious, I know that I am meant to have three boys, which may just make me the luckiest girl in the world. 
TikTok Mom Losing Her Sh*t From Her…