Not gonna lie, friends…the thought of my child choking or swallowing something as dangerous as a battery is in my top three most terrifying fears as a parent.

One mom, Katie Jacobsen, took to Facebook to share her life-saving hack after her daughter swallowed a button battery that could have turned into life-threatening situation lightning fast.

But thanks to quick thinking, the family saved the little girl from serious harm.

“Thank you everyone for the birthday wishes yesterday. It was a good day. Except for the end. So here is a little story,” the post begins.

“For dinner we ordered food from Cracker Barrel. We got a family dinner that came with biscuits with butter and little honey packets.

Right after dinner we sat in the living room.

Maggie comes over to me and points at her mouth and says. ‘I just swallowed that.’

Like any parent, Katie Jacobsen went into immediate mom mode.

The family quickly assessed that the shiny thing Maggie ingested was a button battery from her doll. 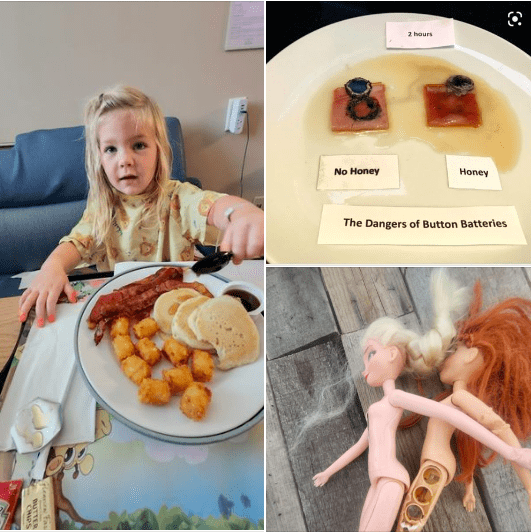 As the family began to quickly gather themselves up to head to the hospital emergency room, Eva (who we think is her other child) quickly Googled what to do if you swallow a button battery and the internet said to swallow honey.

“We start getting ready to go to the hospital. While I’m doing that, Eva is on her phone looking things up. ‘Mom it says to give her honey,'” the post continues.

“We still have little packets of honey just sitting on the table. How amazing is that? It was surely God’s kindness to us! So we give her a couple of packets. And grab the rest for the ride to the hospital. I give her more in the car.”

Once the family gets to the hospital, the doctors immediately conduct an X-ray to find the battery inside poor little Maggie.

They find it located in her stomach, and they decide to keep her overnight for observation and to try and retrieve the button battery in the morning.

But by the morning, the battery began to make its way into her intestines, where there was very little danger, so the family was cleared to go home.

So, why does honey help when you swallow a button battery?

Jacobsen wrote, “I was not planning to share this on Facebook. But multiple times the doctors told us how good it was that we gave her that honey right away.

Because it coats the battery and keeps it from getting stuck.”

According to the Poison Control, the new national guidelines on what to do if someone swallows a battery is to immediately swallow honey.

“While the first thing to do is to make sure a child who is believed to have swallowed a button battery gets to the hospital, this new guideline, based on our study, is better than doing nothing,” Ian N. Jacobs, MD, Director of the Center for Pediatric Airway Disorders and a pediatric otolaryngologist at Children’s Hospital of Philadelphia (CHOP) told the CHOP news blog.

“We found that honey can reduce esophageal injury in the critical time between ingestion and when a child is able to have the battery properly removed.”

According to Poison Control, if you believe someone has swallowed a battery, here are the immediate steps to take:

The honey will coat the battery and prevent alkaline burns from injuring the patient as we can see in the images posted by Jacobsen.

A battery as small as a button-style can pack quite a punch.

In the picture, the battery appears to have burned through what looks like ham on the left side of a plate.

The sample to the right of the burned meat shows a battery coated in honey and no burns on the ham underneath. 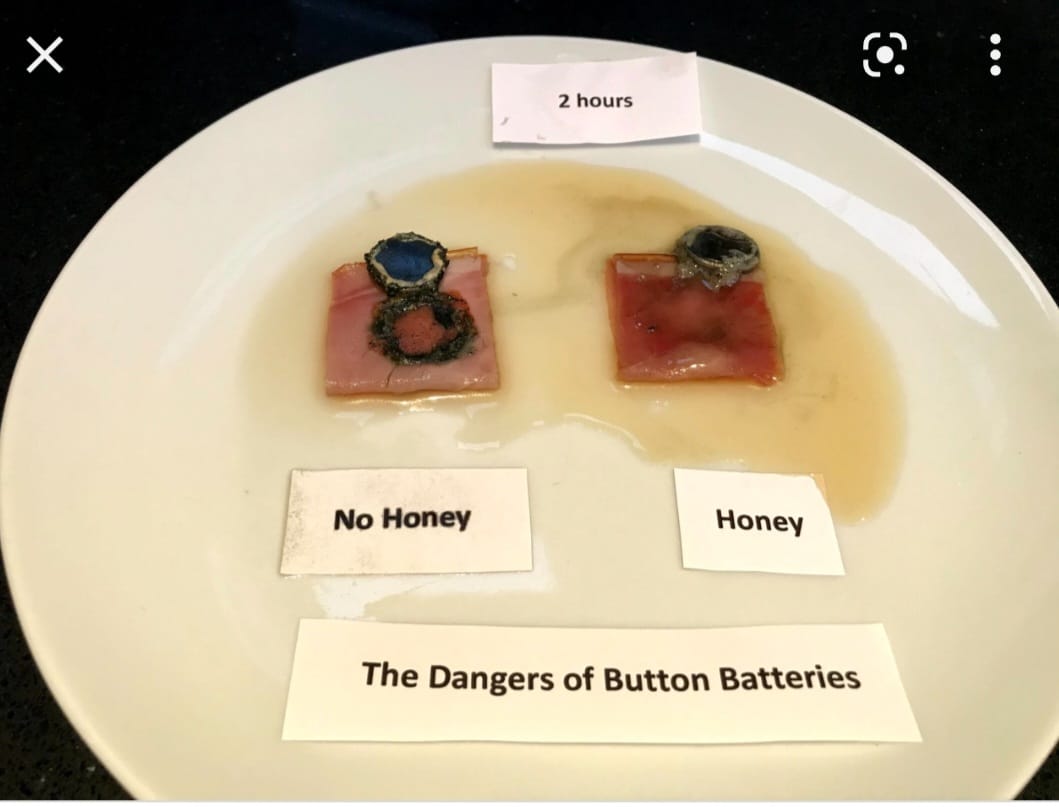 To check out the Poison Control battery triage chart and updated guidelines on what to do if your child swallows any kind of battery, check out their site here.

Jacobsen’s cautionary tale about swelling batteries has gone viral, indicating that parents everywhere share this fear of their kids swallowing scary things. The [post has been shared 98K times and has attracted 2.5K comments and climbing.

Stay safe out there, friends.