Filter Free Parents
Home Mom Life Humor I May Have Peaked As A Stay At Home Dad: I Wiped...

I may have peaked as a stay-at-home dad. I entered “Flow” state while wiping two butts in a Bubba Gump bathroom.

“Flow” is a concept first coined by psychologist Mihaly Csikszentmihalyi. He described a mental state where a person becomes energized, focused, and in pure enjoyment of the task in front of them. Creatives, athletes, and office minions alike all strive to find that moment when they’re “in The Zone,” achieving peak performance and maximum enjoyment all at once.

I never thought that would happen to me while I was wiping a couple of butts.

At 12:37pm on Veteran’s Day, 2021, my preschooler uttered those words that send chills up a parent’s spine in a public place: “Daddy, I have to go poo-poo.” I started to sweat, heavily.

We were already on our way to the bathroom at the Bubba Gump Shrimp Company. My youngest slumped in his stroller in a deep-fried food coma, the distinct fragrance of feces emanating from his ass.

I had a diaper to change and a public poop to facilitate, and I was on my own.

This is what happens to at-home parents who try to do something cool with their kids on a school holiday. The Double Doo-Doo Challenge. Why didn’t I just stay home and watch Paw Patrol?

I kicked open the doors to the men’s room. My preschooler waddled ahead of me, his knees locked together. There wasn’t much time. I scanned the room and noticed the largest stall’s door was open. What luck!

We spilled in and I latched the door shut. I took a deep breath, filling my nostrils with the moist and fetid air of a space where men go for Number Two and Number Two alone. It was go time.

I’m a stay-at-home dad, so this kind of a situation should be what I’m made for.

I take care of our kids for a living. This is my shitty job. If you need someone to wipe a couple of butts, I’m your man. Except I’ve never done this before. Two butts, one stall?

The Waddler dropped his pants in the middle of the room. His younger brother squirmed a little and squeezed out a fart. I started to panic.

“A mom would know what to do,” said Impostor Syndrome Me.

He’s such a dick.

But a funny thing happened: everything slowed down, like I was in a scene from “The Matrix.” I realized that I was The One.

I was The One most equipped to wipe these butts. The sweat froze on my neck. My eyes scanned the room.

And on the far wall, I saw Hope: a panel on the wall read “Infant Changing Station.” Bubba Gump, you progressive bastard!

I unlatched the panel, and my path to success slammed open in front of me as Imposter Syndrome Me vanished into dust. Uncertainty and apprehension gave way to confidence and poise.  I scooped up the Waddler and placed him gently on the toilet seat.

“You’ve got this, big guy,” I said with a slight squeeze of his shoulder.

I lifted his brother onto the changing station and laid him down like he was a precious, poopy jewel. I will escape this stall with no poop on my hands. And I will wipe these two butts at the same time.

Anyone who thinks it’s women’s work to change diapers and wipe butts should have seen me in that stall. There were no wasted movements. With power, precision, and grace I floated from toilet to changing station. Kids were hoisted and steadied, encouraged and entertained.

Pure dad athleticism and an otherworldly sense of focus and calm drove every action. 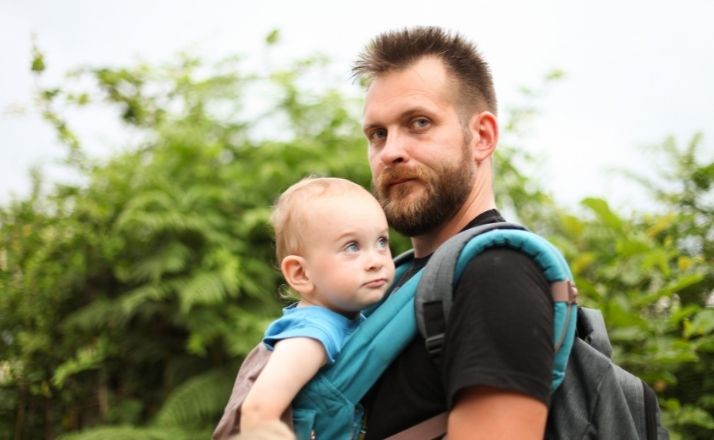 I was Tom Brady running the 2-minute drill, Tiger Woods sizing up the tournament-winning putt, and Lebron James rising skyward for a Tomahawk jam.

But instead of a basketball, I had a wad of toilet paper in my hand. I wiped two butts at the same time that day. And I may have peaked as a stay-at-home dad.

It’s not women’s work. And it’s not men’s work either. It’s just work.

Since I’m the primary caretaker for my boys, I’ve done the majority of that work for almost four years now. Thanks to all that experience, I am the Greatest Of All Time, the GOAT, of wiping butts.

I was the right person, regardless of gender, to be in that stall that day. So when I reached back and cocked my right arm for my signature Tomahawk Double Butt Wipe, I knew it would hit the mark. I am The One. And any dad, with the right tools and experience, can be me.

I washed six hands in the sink, and we all dried them on our pants, cause we’re dudes. My train of bros and I busted out of that bathroom door with a hop in our step, and with the cleanest butts in Orange County.

We emerged into the midday sun, and I checked my sleeves for poop remnants. Clean and clear. Damn straight. I put on my Pit Vipers and glanced back at the restaurant. And under my breath, I said, “Thank you Bubba Gump Shrimp Company.”

It’s easier than ever to wipe a butt in this country, thanks to forward-looking institutions like the Bubba Gump Shrimp Company that install changing stations in the men’s room. I’ve changed a diaper on the floor of a men’s room stall before, in a suit. My pant legs still haven’t recovered.

So fellow dad, we now have the tools necessary to take on our fair share of parenting work.

Our kids need their dads more than ever these days. Shouldn’t we start with the dirtiest jobs? It’s not women’s work, it’s just work. It’s time for us all to step up and wipe a butt.

FB Clothing Ad Has Us Wondering How…

There are times when I swear to God, I will be saying something in my house, and my phone will … Read More