Filter Free Parents
Home Mommifried - Archive I Would Never Do THAT 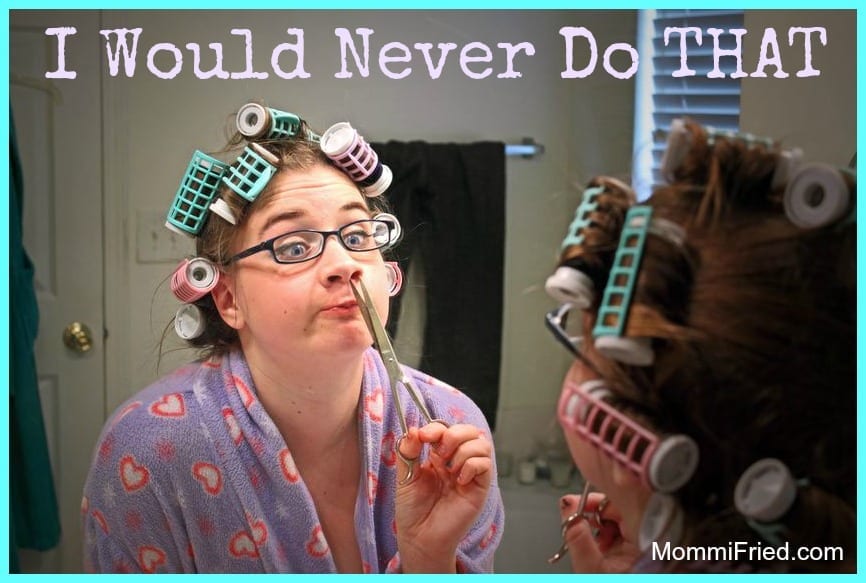 Over the weekend, my husband and I watched the infamous Nathan’s Hot Dog Eating Contest on one of those sports channels that doesn’t see much love unless my better half is around. (Here I am thinking that eating was only a competitive sport when you make ONE box of macaroni and cheese and dish it out in two bowls, at which point two children cagefight over which bowl has more noodles and who gets the biggest helping.)

As the contestants were introduced, the screen revealed their individual world records. A few caused my gagging reflex to come to life. One very voluptuous dude held the record for eating twenty-four dozen oysters. Another was King of shoving pounds of octopus down his throathole. Apparently, gluttony has no limits. This set off a firestorm of “I wouldn’t eat that or that.” Which somehow led to “I wouldn’t do that or that.” Which revealed some key differences between men and women (and how incredibly stupid we are sometimes) …

ME: I would never eat a live worm. They fertilize gardens. FERTILIZE! They shit all day long. And they’re cold and wiggly. I couldn’t.

HIM: If they were covered in ketchup and brought to room temperature, I could do it.

ME: They’re cold-blooded creatures. Were you planning on microwaving them?

HIM: I can barely change Luca’s diaper. I’d much rather change Aless.

ME: You’d rather change a kid who shits like an adult than an infant who barely eats solids?

HIM: Hell yeah. Those breastmilk poops smell all yeasty. Grosses me out!

ME: I’d never jump out of a plane. I hate heights and have bad luck. I’d be the first skydiver to get caught in a swarm of seagulls or something,

HIM: Flock. It’s a flock of seagulls.

ME: Flock that. I’m never skydiving. Would you do it?

HIM: I’d never drive a minivan.

HIM: You wouldn’t, would you?

ME: Sure! If it was tricked out with built-in TVs for the kids and noise canceling headphones for me. I’d buy the shit out of one of those.

ME: I’d never ski again. My brain isn’t wired for maneuvering on those bastards. I almost took out an old couple and ran directly into the side of the lodge from the bunny slope. Even a ski instructor pointed to the exit.

ME: You couldn’t luge.

ME: You can’t sit still in one position for more than three seconds. You’re always jerking and moving. Like an insect drowning in sink water.

HIM: Way to go with the comparison.

ME: You couldn’t luge. But you could enter an “I’m An Insect Drowning” contest.

HIM: I would never wear a shirt like that (points to some plaid, v-neck shirt on TV).

ME: You wouldn’t wear that, but you’d wear a T-shirt that says “Intercourse, PA” and laugh for an hour.

Teens Are Using TikTok To Diag…