“Snow!” my kids shriek with glee as they look out the kitchen window. The giant white flakes drift down from the sky beautiful and serene- mocking me.

Oh, did you think you were getting out of the house today? Well go ahead I guess, but we’ll be here. ALL. DAY. LONG.

I go on making breakfast as I try not to curse directly at the snow within earshot of my kids. They hurry themselves eating with the hopes that they can immediately go out afterward and frolic in the frigid winter wonderland that is our yard.

I had dreams of sitting and drinking my coffee while it was still hot, but alas, winter has other ideas today.

Winter might be beautiful, but it is going to break me if it doesn’t end soon.

While I grew up with a lot of snow as a child, I have learned that I despise winter in general as a parent. Some say the snow makes the world look magical, but it looks like hell to a mother of young kids.

In fact, if the months of January through March would just fall off the calendar that would be fine by me.

Snow makes daily life much harder with small kids. If any parent tells you that they love taking their kids out into the snow, they are lying, plain and simple.

The pulling and the stuffing and the zipping of tiny humans into their snow gear is so infuriating. The whole process makes me want to send them outside with only jeans and a T-shirt, risking a call to the state.

Honestly though, even if I were “that mom,” it probably wouldn’t make a difference how many layers they were wearing because they’d be back inside with 3 minutes of being sent out either way.

As my kids finish their food and run to the door, winter snow gear starts to fling wildly in the air as they all struggle to put on their things. The 3-year-old squeals that he needs help and my head starts pounding.

Five minutes and 32 seconds after all the children had been sufficiently stuffed into their snow clothes and sent outside, they start to wander back in. Complaints of being “too cold” and, “brother threw snow at my face” begin to spew forth. And then comes my favorite: “Mom, I wanted YOU to come out and play with us!” 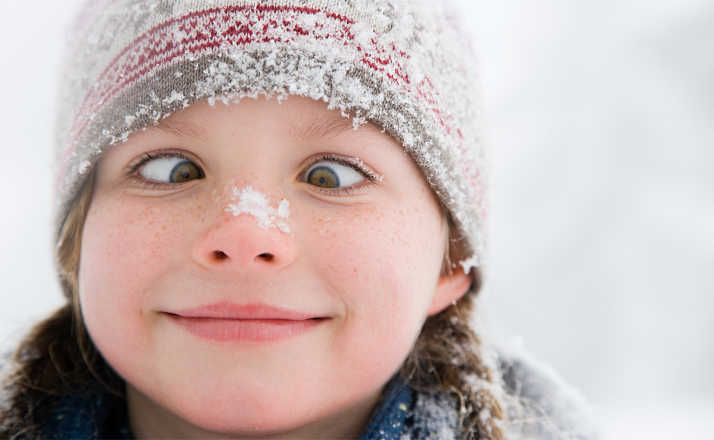 The fact is, I would rather gouge out an eyeball than to go outside and play in that damn freezing winter fluff. I say a clean version of this to my kids.

As if in direct reprimand of my nasty attitude, I immediately step onto a clump of snow on the floor which soaks my sock.

In my opinion, there is nothing to look forward to after Christmas- except summer.

Winter is like a crappy party that I had my doubts about but went along only because a friend promised me a good time. I expected drinks and delicious oeuvres, but all I received was 13 gallons of hot chocolate and a truckload of candy canes.

Then, after I decided that this party sucked snowballs and tried to leave early, they locked the doors on me saying, “It’s too cold out there. No one leaves until April.”

Just like this party, I am now stuck inside for the long haul with wild children who are flouncing about the house like mustangs kept in a pen.

I’m also buying hot chocolate by the gallon because my kids think that it’s the official drink of winter. They usually start asking me to buy it in the summer, right about the time Hallmark plays their damn Christmas in July movies. I buy it because I’m a good mom, but each time, I die a little inside.

I find various half-empty cups of the sweet brown shit everywhere in my house, accompanied by drips and spills, now dried on the floor.

There is nothing good about 4 kids who are hopped up on massive amounts of sugar and caged in the house. Nothing.

I try to block out the cabin fever by laying, covered with blankets and a heating pad, and dreaming about the warmth and freedom of summer.

My fuse is burning quickly.

My patience is way shorter than what is needed for a large family because I am officially burnt out on my kids and being stuck inside my house.

I try to keep us busy by doing activities together, but making paper snowflakes and playing board games gets old real quick. I very quickly turn into the mom who sends them to watch hours of TV simply because there is nothing else to do.

For the next few months, this is my life, unless I suddenly decide that I’m willing to take them out in the frigid, hostile weather- which I am not.

I get so defeated by the dark, cold winter that most years I actually look forward to seeing what that fat groundhog predicts about the weather!

It’s fairly pathetic for a grown woman; everyone knows that Punxsutawney Phil doesn’t know a damn thing! He simply does whatever it takes for his handler to let him back into his hole and out of the blasted cold the fastest!

Yep, if winter doesn’t end soon, it may just break me this year. I haven’t seen the sun in months, my skin is so white, it’s almost translucent, and really, is there any point in shaving my legs anymore?

And, help us all if another child asks me for hot chocolate.