Filter Free Parents
Home Parents If You Let Your Dog Off-Leash, You Are An Asshole

Dogs are awesome, aren’t they? Big balls of loyalty and love. If you have a dog, I will always accept an invite to your house – you don’t even have to be home. Dogs are just the most perfect beings on the planet. But here’s the thing – if you let your dog off the leash in public, you are an asshole.

I’m not talking in designated areas like dog parks (so shut it, all you pedants reading this.) I’m talking about playgrounds, fields, sidewalks – anywhere that is not your own fenced in property or somewhere that specifically says “Unleashed dogs allowed.” 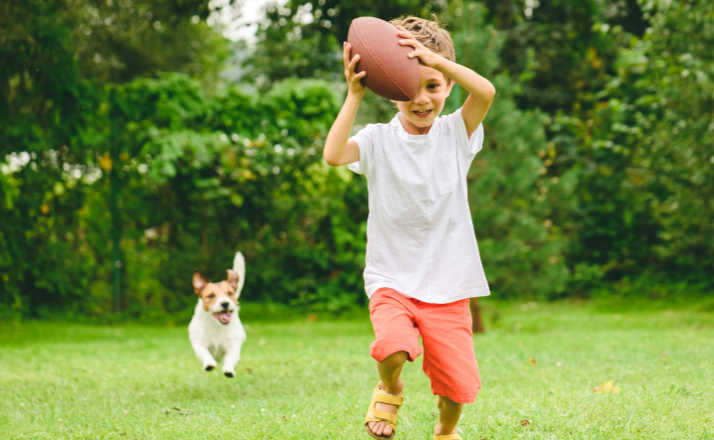 If I love dogs so much, why do I care if they are leashed?

And just because I am not scared of dogs, doesn’t mean there aren’t plenty of people for whom the sight of an unleashed dog would absolutely petrify them. I know one lady who jumped into the back of a stranger’s pick-up truck to avoid one.

Your dog can be a nuisance.

I was once out for a walk with my baby in his stroller, and as I was standing under a sign that said, “Dogs must be on a leash” (I shit you not) a woman walked up and let her three dogs off their leashes.

Predictably, they ran in three different directions along the narrow bike trail. Her Great Dane, who nearly looked me eye-to-eye, then walked over to my baby and attempted to take the cookie out of his hand. His owner laughed, “He loves to search strollers for cookies.”

I was less amused, wondering if this several-hundred-pound dog was about to take part of my baby with that cookie, and not thrilled to have stranger-dog drool on a hand that was entering my baby’s mouth any second now.

Another time, my kids were playing in the soccer field of a park that again specified dogs must be on a leash. My six-year-old threw a soft baseball, and as he went to retrieve it, an unleashed dog came bounding from across the field. He grabbed the ball, popping it with his mouth immediately.

Having taught my kids not to approach strange dogs, my son did not try to retrieve the ball. The dog gnawed on it a bit before his owner gathered him, shrugging his shoulders and saying, “He has one like that at home.”

Dogs can be dangerous to each other, too

Then there was the time at the same park that an unleashed dog didn’t tear apart a ball – it tore apart someone else’s dog. Before the owner of this unleashed “friendly” dog could get their large dog off the smaller one, the small dog was dead. The attack was witnessed by a nine-year-old boy who had a difficult time working through the trauma of what he had seen.

Okay, let’s assume you have read this far and decided you are fine with being an asshole because you only care about your dog and other humans can suck it. You still need to leash your dog for the sake of your precious canine.

No one who lets their dog off a leash thinks their dog is going to run off – until they do. I personally know several people, responsible people, loving people who took great care of their dogs, who learned this lesson the horrifically hard way.

Their unleashed dogs ran unexpectedly, right into traffic. I don’t know what makes dogs decide to do this, but it happens – a lot more often than you think. Other dogs simply run away and may never be found. You have seen the posters and Facebook pleas.

So just do everyone – and your dog – a favor and pay attention to the leash by-laws.

They are there for a reason. If you are a responsible dog owner, who keeps your dog leashed, I will be the first one to coo over your pet and love on them (after asking first, of course.)

If knowing everything I just outlined, you still let your dog run free, with no regard to other people or the safety of your dog – well – you’re an asshole.

When you have a baby, your first thought when leaving the hospital is, “Why, for the love, don’t babies come … Read More