I have been married three times. That’s right, three. I am still happily married to my third husband, but that doesn’t change the fact that there have been three weddings. Three name changes. Three.

I’m not a gold digger. Quite the contrary actually. Although that would have likely made things easier for me and definitely would have made it easier for others to wrap their heads around my multiple MARRIAGE.

I’m also not addicted to the attention that comes with being a bride. In fact, the actual bride part of each wedding was the part I least enjoyed. I hate being the center of attention and each and every time, being the person that everyone’s eyes were fixed upon made my skin crawl and my lip curl. 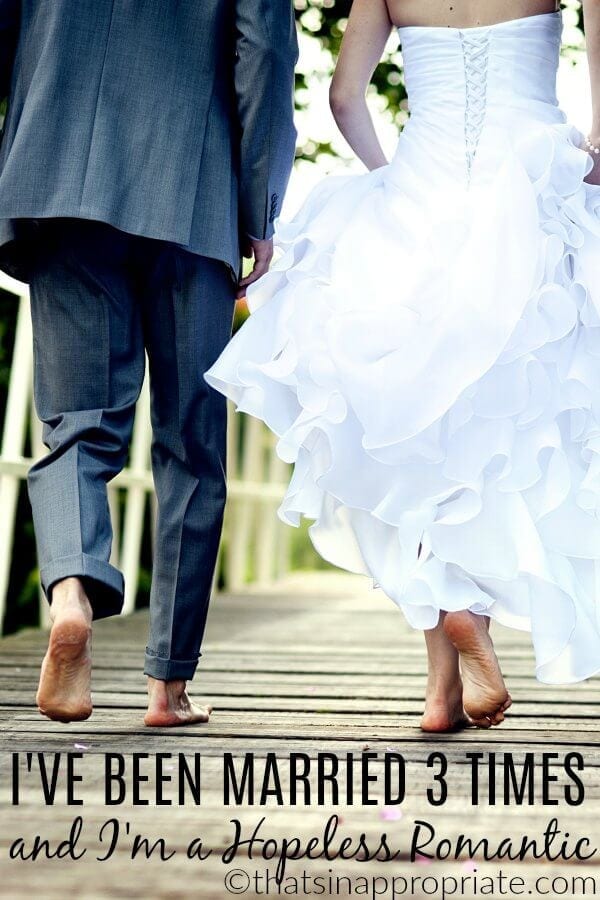 The part I looked forward to, the only reason I was there, was for the vows. There is something so incredibly beautiful about loving another person so much and with such total devotion, that you promise them forever. I may not be a gold digging attention seeker, but I am most certainly a hopeless romantic who believes with all her heart that HAPPILY EVER AFTER is possible.

In kindergarten, in the springtime, we would hold a wedding every day at recess. Our little country school had a huge playground filled with dandelions. I would take the braids out of my ridiculously long hair, and rub dandelions on my cheeks for blush. My little girlfriends would pick bouquets of the vibrant yellow flowers and we would proceed to have a wedding. I was always the bride, and I always married the same boy. Every day. Because you know, commitment.

In grade four I took Shakespeare’s “Romeo and Juliet” out of the library and read it front to back multiple times. I was entranced by the depths of love that the ill-fated pair felt for each other and the lengths they went to in order to be together. I loved Cinderella and knew in my heart of hearts that someday my prince would come. I was in love with commitment. The idea of forever and ever no matter what.

My parents divorced when I was seven. My father HAD NEVER BEEN A GOOD HUSBAND and also had no idea how to be an involved or present father. He was an alcoholic and an adulterer and he never kept a single promise he made to me. Not one. Not ever. You would think that this experience would have made me cynical about love and marriage, but it seemed to have the opposite effect. It made me even more determined to find the kind of commitment I dreamt of. To prove that it was possible. 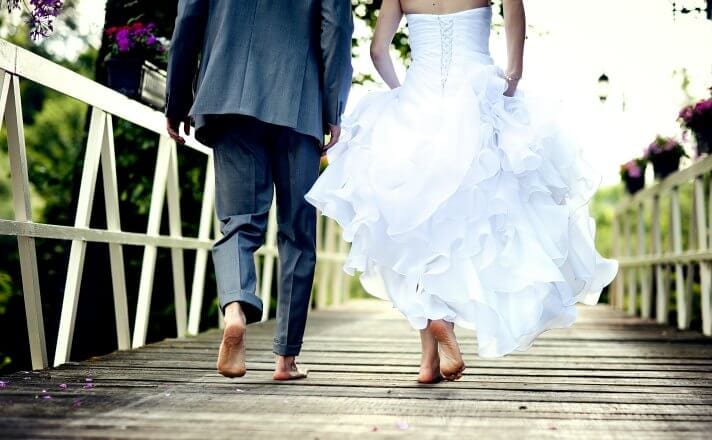 I met my first husband when I was in my last year of HIGH SCHOOL. We started talking at a party and ended up lost in conversation the entire night. As the sun came up, I felt that light was shining on a true love story. He wanted a family and a home in the country, and I wanted a family and a home in the country. He loved all the same things that I loved. We shared the same beliefs and the same goals and dreams for our lives. I was certain we were soul mates. This was it. My fairytale. We married right after college. He was twenty one, and I was twenty two.

When the excitement of the wedding and honeymoon was over we settled into our little home in the country and everyday life as a married couple. I was ready. Ready to start our family. Ready to build our life together and watch my happily ever after unfold.

But unfortunately a very different story was being written. My husband became more and more distant. He began to say he wasn’t sure that he wanted children at all and that our home in the country was more work than he anticipated. Maybe we should sell it. I was confused and heartbroken. In a matter of months we became strangers. Many tearful conversations later and we realized the truth. We had little to nothing in common. He had wanted me to stay with him. He wanted me to be happy. So he agreed with everything I said and did to keep me happy, and to keep me. But he was miserable. And that was that. We parted ways. Less than a year after saying our vows.

That first failed marriage would have given most people pause. Perhaps had them questioning the concept of forever. But not me. With my tattered copy of Romeo and Juliet by my side I stumbled headlong into the next one.

My second husband was someone I had been friends with in high school. We had lost touch over the years so I had no idea what he had been up to and he wasn’t forthcoming with details. He talked non-stop about his desire to have children and a happy family. He told me he wanted to build me a white picket fence. Hook, line and sinker. I was sold. Old friends from high school discover years later that they are soul mates! They fall madly in love and build a beautiful life together. It was a made for tv movie. A romance novel. I was all in. Vows were said and two beautiful children were had.

BUT THIS WAS NO FAIRYTALE. The realities of becoming a father and real life responsibilities started to tarnish the armor of my prince charming. I discovered he had demons that were well hidden and worse than any fire breathing dragon. Alcohol, drugs, adultery and abuse. The paint on my white picket fence was peeling, exposing the rotting wood underneath.

Almost nine years. That’s how long I clung to my dream. That’s how long I tried to believe in forever, as he poured gasoline on his vows and lit a match. Eventually things became so toxic and so dangerous that I took our children and I ran. No pumpkin carriage. No singing forest creatures. Just survival. Marriage number two was over.

I was a single mom with two small children and enough emotional baggage to sink the titanic when I met husband number three. He happily and willingly became an instant father to two children who desperately needed one. Life with him was easy, simple and sincere. We laughed constantly. I felt completely safe. Once again, vows were said. This time there were children participating in the ceremony. The two that he loved as his own, a little one we had together and the fourth just twenty weeks old in utero. Now we share a beautiful life together. Truly a happily ever after.

I realize that three marriages sounds insane to most people.

But I learned a lot from those marriages. And I sincerely hope that I can pass those lessons on to my children as they grow.

I want them to always be true to themselves. Hang onto their ideals and goals and refuse to pretend they can be happy living any life other than the one they dream of.

I want them to believe in forever and happily ever after. I want them to know that in a world filled with cynicism and negativity that their dreams of love and happiness are valuable and possible. Those dreams represent hope. Something that so many have given up on. They should hang onto them with all of their might.

Love with your whole heart and everything you have because it’s worth it. Could you get hurt? Yes. You might get hurt so badly that you feel you may never recover. But love anyways. One day the right person will see happily ever after in their eyes, and it will all be worth it.

LOVE IS WORTH IT. Happiness is worth it. They are worth it. Don’t ever give up.

And if three marriages are what brought me to this point in my life and allow me to pass those lessons on to my children then they were more than worth it. Through the ups and the downs and the sometimes unbearable pain, a little girl with dandelion blush hung on to her beliefs. And it was worth it.

There’s a commonly held stereotype that when it comes to feminine products, men are totally clueless. We see it movies … Read More

Women’s bodies have a lot going on. After all, they literally have the ability to create life and carry a … Read More

Mom Loses It At The Happiest Place …

For many families, the ultimate vacation destination is none other than Disney World. Kids and adults alike are obsessed with … Read More