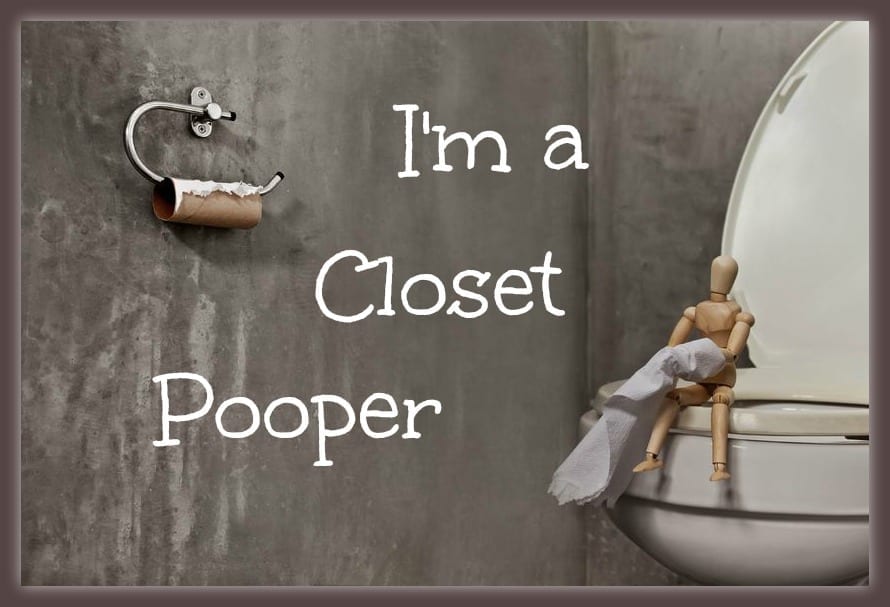 I have a huge confession to make. I can’t poop when anyone is around. For some reason, I completely freeze up and my shooter shuts down. I call it the emergency shit switch. It’s like a catastrophic event when I need to poop and there are people nearby. The switch gets flipped and shit just stops. Literally.

My husband, on the other hand, has an open door policy when using the bathroom. It’s like he needs morale support when taking a shit. I’ve actually caught him carrying on full, intelligent conversations with the neighbors through the bathroom window while sitting on the john. He’ll gladly yak away on his cell phone, too, while obviously sounding like he’s struggling to get a 40-pound weight off his chest. It’s disturbing. For me. The closet pooper.

I need peace and quiet and lack of bodies. That includes the miniature kind. I took my four-month-old into the bathroom with me recently when I needed to poop. As I sat down and got comfortable, I noticed him staring at me…intently. It was like he was waiting for it to begin and it completely creeped me out! I don’t want anyone hearing my pellet splashing orchestra, not even my infant who has yet to process the world around him.

I’m pretty sure there’s a name for this issue, condition, whatever is wrong with me. I don’t dare look it up, because the end result (get it?) will probably scar me. I don’t want Google’s diagnosis of Poopal Anxiety or Obsessive Shit Disorder. There’s enough going on in my head without adding to the list.

Public restrooms are also out of the question. Not going to happen. I don’t care how bad I think I have to go, I’ll hold it and be constipated for a week before I’ll poop with a crowd.

I don’t want to hear other people pooping either. That makes me equally uncomfortable. I won’t make eye contact with anyone who has just stepped out of a stall after taking a poop in a public bathroom. They know they just made childbirth seem quiet. You know they just dropped a small sedan from their hind quarters. No need to add to the awkwardness of the moment.

When I have to poop, the toilet is not my throne. Why would it be anyone’s throne? Shitting is not a jovial event or a royal gala. The toilet is the enemy. It’s nothing more than a non-mobile port-a-potty with indoor plumbing. The next time you sit on your throne, I want you to look around. See any jesters or knights in shining armor? Didn’t think so.

So I’m coming out of the closet today; hopefully without toilet paper stuck to my heel. What’s your Tuesday Confession?

I Have Lost Friends. I Have Hu…

The coronavirus pandemic has required us to modify so much about our daily life, & it’s been unsettling to say … Read More