It didn’t take a psychic to predict what was about to unfold before me. My eight-year-old son had just struck out in his little league game. While I attempted to brace myself for some ugliness-it was just too late.

In the dugout where he returned, a hat and bat went fiercely flying in the air. An angry mouth bore some ugly words.

The kid was pissed.

Although my son is a great baseball player, he does occasionally strike out. In fact, every single person who has ever participated in the game has had it happen. It’s not a great feeling for anybody. However, for Owen, it is soul crushing.

My name is Kathleen.  I am raising a perfectionist, and it is harder than it looks.

I always took great pride in the seriousness for which my son takes things. He is an excellent student and great athlete. Both teachers and coaches alike have deemed him a “superstar.” My child is not without flaws but he works and plays hard. For that I am extremely grateful.

Owen, on the other hand, has been known to be his worst enemy.

I have been in tune with Owen’s personality for a while now, but it wasn’t until Covid-19 hit that I started to see the severity of his perfectionism.

I experienced it firsthand one day during remote learning. His online platform enabled him to draw his words on the screen. Pretty cool.

However, it can be a very hard task to learn-even for an adult. The finished product can look far from perfect-maybe even a little sloppy.

I can accept this.

His teacher certainly can.

Many of his classmates can too.

Within seconds, he had a breakdown over how “ugly” it looked. As I tried to comfort him, I realized it was a lost cause. 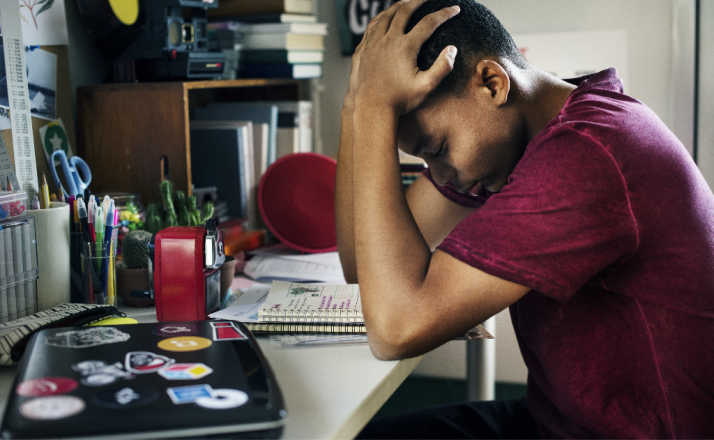 The letter “T” in which he worked so hard to craft, looked more like a plus sign, Or was it a cross sign? I really don’t recall as I was too preoccupied muffling all the screaming in my ears.

Either way-it was a total disaster.

It was during circumstances like this when I surmised that it simply wasn’t worth going on.

We both needed a break.

I let the minutes fly by in silence.

I knew that my son, a stickler for all things perfect, would make sure the letter “T” was good enough before the assignment deadline.

Because forbid he disappoint the teacher.

I, on the other hand, was left nursing a migraine.

In the days that followed, I made it a point not only to be gentler with Owen, but gentler with myself. After a few days of watching the meltdowns I had begun to question my own parenting skills.

What kind of a parent lets this happen? I was the teacher that lost control of her class.

I had to step back and re-evaluate.

Mostly, I considered the timing of the meltdowns. We were right in the thick of the Covid-19 pandemic and I was struggling? How was I supposed to expect my kid not to? Well, of course, he wasn’t doing that well in isolation!

Neither was any of us.

I also explained to him that we all make mistakes.

Work breaks were not only encouraged, but became a necessity.

I kept calm and focused. If anything, I wanted to prove to him that we would be able to get through this together.

The turning point came after a particularly hellish homework night. He made a mistake and was not happy. He began the mumblings of how bad he is at everything and how awful and unfair life was due to his stupidity.

It was then that I asked him a very serious question:

“Owen, what would you say if Brandon (his best friend) started talking that way about himself? How would you feel if he used those ugly words? “

He understood and a dialogue began.

In researching the behavior of perfectionists, I learned that many of them suffer from anxiety.

I felt for my son. If anyone could understand anxiety, it was me. It was time to change things up a bit.

Instead of spending five hours arguing in front of a screen, we modified the behaviors.

We made sure to get outdoors at least a couple of times a day for recreation.

We read to each other for enjoyment.

We cleared and organized the work space so that it was a happier and more productive one.

We also tried to keep in touch with Owen’s teacher as much as possible.

When I voiced my concerns, I was relieved to find we were far from alone.

So many parents and students had the same hardships. We accepted that if we weren’t able to finish a particular task for today, it would be waiting for us tomorrow. There was absolutely no need to push an already trying situation.

Now that Owen is back in school full-time, I am trying to keep everything consistent. He still gets upset over a mistake every once in a while, but we quickly move forward from it.

Maybe imperfect is perfect after all?

And that’s fine by me.