This afternoon I witnessed my 18-month-old daughter get barreled into by a three-year-old boy at full force. Her little legs were lifted off the ground, flying through the air backward, and slammed on the floor hitting her head.

At that moment, something inside of me died, snapped. I couldn’t hold my strong mama bear façade together anymore. I ran to her, lifted her into my arms, and cried.

I cried because I was scared.

I cried because I felt like I could have stopped it if I got there two seconds earlier. I saw it happening. I saw the first kid run toward her direction down the narrow hallway and said “oh no,” to my mom, who was with us for the class.

I went walking toward her to lift her up; I didn’t run only because I’m 33 weeks pregnant right now. Then the second kid, ran past me, not looking where he was going. I screamed “No!” The kid turned and looked at me and went right into my daughter. Then, I ran.

Mom guilt: I ran too late.

I cried because she was crying with such a force and the amount I love her made me feel that force, her pain.

Ever feel like you want to take your child and put her/him back into the womb or even into your Bjorn carrier where she/he was safe and attached, protected even? Well, my heart has been feeling this a lot lately.

My older daughter came up to me and was very concerned, she’s empathetic. She said, “Mommy stop crying,” which broke my heart because I knew my tears were scaring her. 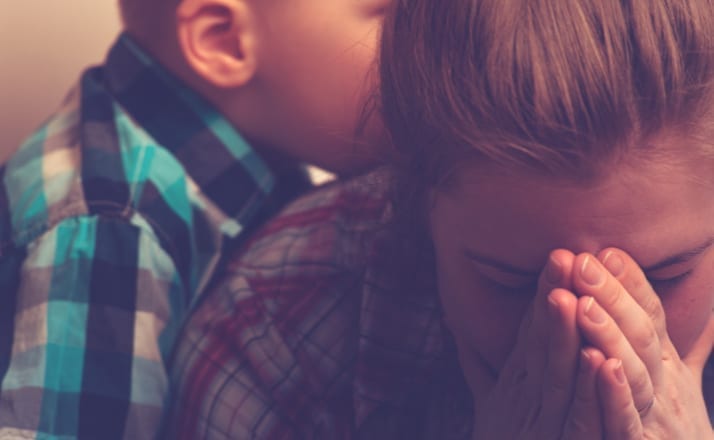 I even told the staff there that I was hormonal and that’s why I was crying.

My daughter was okay. There was no reason for me to cry—no blood, no bruises, no physical wounds—why couldn’t I get a handle on my emotions?

Shortly after I was on the phone with my father and I told him, “I’m so upset I cried in front of Viv” (my older daughter).

My father’s response: “So, what’s so bad about that?”

And you know what? I think he’s right. What is so bad about that?

I made so many excuses for my tears.

I think a part of it was to mask my fear for my older daughter, but another part was because I was embarrassed. I’m an adult, a mother, I’m supposed to be strong and never expose fear…right?

Wrong. After some thinking, I’ve realized, it’s okay to cry, even in front of my daughters.

It doesn’t mean I am weak. And it showed my daughters that it’s okay to cry too, that it’s a natural response that reduces stress and makes you feel better.

It doesn’t make you any less strong to show your emotions. In fact, bottling them up and taking them out in negative ways by using numbing tactics is far weaker. It takes strength to show vulnerability by crying and dealing with those emotions head on.

My daughter’s future response should be: “It’s OKAY mommy” rather than “Mommy stop crying!” Let’s help make the next generation more comfortable with vulnerability than ours. It’s a healthier resolve.

Suicide Tips For Children And Schoo…

As parents embarking on this age of advanced technology with our kids, we are constantly forced to adapt to our … Read More