“Yeeeesss! Wooooo!” My friend’s six-year-old daughter Clara rejoiced and trotted a victory lap around the playground. A trickle of blood connected her mouth to her chin. Undeterred, Clara held up her arms in triumph, showing the other children the prize pinched between two fingers: her first lost tooth.

The playground kids watched Clara’s victory lap, oohing and aahing almost in unison. Clara’s mother and I stood and applauded from an adjacent park bench. Clara pumped her fists at us in appreciation.*

That’s when I noticed my own six-year-old daughter hiding under the clubhouse, hugging her knees and sobbing. Minutes prior, my daughter and Clara had been busy playing travel agency inside the clubhouse, booking extravagant vacations for pretend clients before Clara’s loose tooth finally released its hold.

“What’s wrong, honey?” I bent underneath the clubhouse and asked.

“Clara lost (sob) her tooth before me. I’m almost seven (sob) and the Tooth Fairy forgot that. Now Clara’s tooth fell out before mine and me and Clara are out of order. It’s not fair!” My daughter bemoaned in spurts, blaming the tiny winged fairy for swindling her out of a victory my kid thought she had won by virtue of sheer birth-order.

“Well, it’s not your turn yet to lose your first tooth. Now wipe your tears and go congratulate Clara on her special moment,” I encouraged matter-of-factly, as if I myself lived life instantly high-fiving everyone who got something I wanted.

As my daughter mulled over what I hoped was an empowering life lesson that she’d absorb and thank me for one day, I was gripped by my own hypocrisy. Long-buried memories resurfaced before my mind’s eye, resurrecting scenes in which I had let envy keep me from congratulating others for their accomplishments.

My thoughts yanked me back to high school. A classmate had just bested me for tenth place in our graduating senior class by a hundredth of a GPA point. The classmate, a quiet girl with few friends, had always been kind to me. Despite that, I recalled responding to her (deserved) victory with a huffy silence that left her alienated and hurt for the remainder of senior year.

I tried shaking away feelings of remorse over my childhood pettiness. However, my conscience was not yet done with me.

Another image materialized to highlight my cavalier expectation of my six-year-old. In that image, I was at my first job out of grad school. I watched as a co-worker landed a position I had hoped would remain vacant for a few more months so that I could apply for it when I was eligible. My co-worker was the type of employee who berated assistants in the hallway; I did no such thing. My co-worker syphoned credit from his peers in trickles and chugs; I did no such thing. My co-worker also brought in a consistent stream of business; I, also, did no such thing or, at least, not as consistently as he did. Given his greater contribution to our company’s bottom line, my co-worker ascended the notch up the corporate ladder. Me? I got a cringe-worthy memory of avoiding him and simmering in my office for days.

The injustice of my co-worker getting a promotion despite being the office sleaze wasn’t the point, since life—at work or otherwise—isn’t always fair. Instead, the lesson in that memory and the one before it was that I would go on to regret such inelegant refusals to congratulate peers.

“Man, I was a jerk,” I whispered, still sitting on my haunches.

“What’s a ‘jerk,’ Mommy?” My daughter’s wide-eyed question pulled me out of my head and back onto the playground woodchips.

“‘Jerk’ is a not-nice word that you shouldn’t say” I said, focused on a sudden urgency for my daughter to stem future regrets, coupled with a renewed understanding that doing so isn’t so easy. “If you’re up for it, will you go congratulate Clara on her happy moment? I know it’s not easy, but you’ll feel bad about it later if you don’t.”

My kid gave me a half-smile in response, and shuffled her light-up Sketchers in Clara’s direction. I fretted until I heard my daughter mutter a sincere-enough “that’s awesome” to her pal. That’s my girl.

Moments later, the fallen tooth was forgotten. The two girls had resumed their gleeful game of travel agency, albeit with a new lisp for one of the agents, and an avoided would-be regret for the other.

*Name has been changed to protect the toothless. 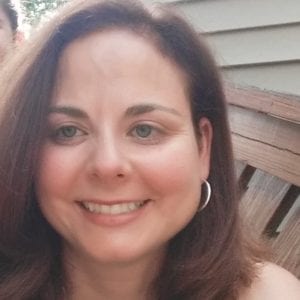 Dolores Smyth is a freelance writer, Bible study leader, mother of three, and wife to one. Her work has appeared on Parent Co., Mothers Always Write, and Lose the Cape. When she isn’t writing, you can find Dolores supporting the theater and local Mom and Pop restaurants, or laughing over apple martinis with girlf
riends.