Sometimes I want to chuck my phone at a wall when I read the news. But alas…the dumpster fire of cray smolders on.

This week in I-Couldn’t-Make-This-Sh*t-Up-If-I-Tried, a mom in Mississippi took to Facebook to share a picture of an outrageous letter that was sent home to parents asking if their emotionally insecure daughters would like some shapewear to help them feel better about their bodies.

Because apparently conforming a growing child’s body to impossible beauty standards is the answer? WTF?

Ashley Wells Heun posted the now-viral image of a letter from Southaven Middle School that was sent home with her eighth-grade daughter with this caption:

“So this is what my 8th-grade daughter brought home from school today.

I am beyond pissed, though I’m not sure if I’m more pissed at the fact that they had the ‘balls’ to send this home or the VERY IGNORANCE of the ‘counselors’ at the school,” Heun wrote in her caption.

“So you begin this masterpiece detailing how damaging a negative body image is for girls, how the stress of conforming to an impossible perceived image can adversely affect their mental health, and then OFFER TO GIVE THEM SPANX SO THEY CAN BETTER FIT THE PERCEIVED IMAGE?!?

How, in the hell, are you promoting a positive body image by saying

“here, you’re too fat. You need shapewear to make you ‘look thinner.’

Are you freaking kidding me?This isn’t over. I will be composing a few emails now…”

And when you read the letter, you’ll think it came right out of the 1950s.

The letter starts off with a bizarre showing of concern for how girls perceive themselves but then offers parents an order form to get some shapewear sent to their child.
WHAT!?

“Body image is a perception of one’s body, and simultaneously, a measure of one’s attractiveness,” the letter begins.

“Female body image is a product of personal, social and cultural experiences, and often emerges as a desire to adhere to an ‘ideal’ body shape.”

The letter bangs an interesting left by diving into all the reasons why the authors of this piece of trash letter are focused on girls and not boys because apparently, boys don’t suffer from insecurity to the extent that girls do?

“Researchers think that dissatisfaction with their bodies may be part of the reason why more girls than boys have depression.”

Holy shit, are you kidding me? Perhaps teaching girls how to empower themselves through body acceptance no matter what their size is a better tact than telling girls they will suffer from mental illness if they don’t wedge themselves into frigging shapewear.

“I decided words and social media is a good tool and I would use that to rally the troops to change this and to really let the school know how exactly tone-deaf it was,” Heun, told TODAY during an interview.

As you can imagine, Heun’s post quickly made the rounds on social media, which may have been what caused the school to abruptly change its plans.

But the responses in Heun’s comment section were mixed.

One person wrote that idea wasn’t actually all bad and pointed out that it may have been the girls themselves who asked for help. 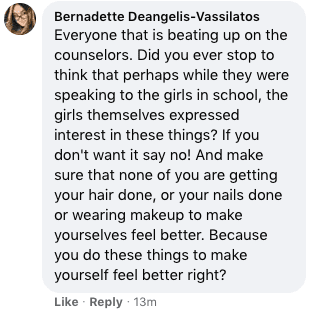 Another mom was understandably furious, as were many commentators, and pointed out that counselors should be supporting students and not making their issues worse.

Pam White wrote, “This is truly unbelievable!! Counselors are there to help, not add fuel to the fire!

But not everyone agreed, for the most part, folks in the comments section saw this letter for what it was; an ugly attempt to control young girls’ bodies.

“the fact that they sent this with the girls is ridiculous.”

She goes on to say that this type of communication could have been sent directly to the parents via email and she wondered aloud how a student reading a letter like this could do more harm than good. 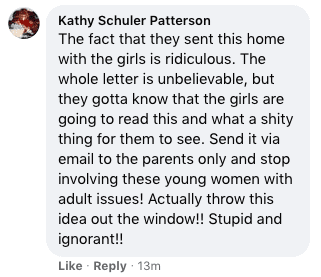 According to TODAY, the school principal personally apologized to Heun and then made a public statement ending the program to hand out shapewear to still developing girls.

“The district has been made aware of the parental permission form sent to parents by Southaven Middle School.” Adding that “district officials understand how this type of information causes serious concern from parents.”

Can we please all agree that girls – and boys, and individuals who identify as other genders, don’t need schools trying to tell them how to present their bodies?

Can we also agree that in 2022 that while we’re finally talking about mental health in a public way that we make damn sure to include kids?

These girls don’t need offensive letters being sent home to address their attractiveness.

They need grown-ass adults in the room advocating for healthy emotional and mental health by teaching them the tools to self-empower.

“I Feel Grief My Kids Ha…