It’s a given that your body undergoes a ton of changes during pregnancy. What surprises a lot of postpartum women is how the body changes after pregnancy continue — and how many of those changes remain.

What body changes can you expect after pregnancy?

In the early postpartum days, you may notice swelling (especially if you had an epidural, as they typically administer a lot of fluids to keep your blood pressure up). Then, you’ll see the swelling recede.

That, combined with hormone shifts, may result in you peeing and sweating a lot for a few days or weeks. All that fluid has to go somewhere!

You may also notice some aftermath due to pushing — tearing and/or stitches, hemorrhoids, etc. These are all normal, but definitely contact your health care provider if you have concerns.

Breastfeeding-related changes to your body

Your milk will start to come in anywhere from a few days to a week postpartum, and that results in a lot of changes to your breasts.

They will start to feel fuller, heavier, even a little warm and swollen as your milk comes in. If you decide to breastfeed, your body will gradually get used to these changes and they’ll become less noticeable.

If you aren’t breastfeeding, your milk will still come in. This can be very uncomfortable for about a week, until your milk dries up on its own. The worst of the discomfort will subside after the first few days.

Depending on your body, your breasts may be relatively unaffected by all these changes long-term, or you may notice permanent changes in your breast size, shape, or fullness. It’s a crapshoot.

What about the “mummy tummy”?

Another common body change after pregnancy is often referred to as the “mummy tummy.” It’s a nickname for the general state of your stomach after pregnancy, which can be caused by a few things. 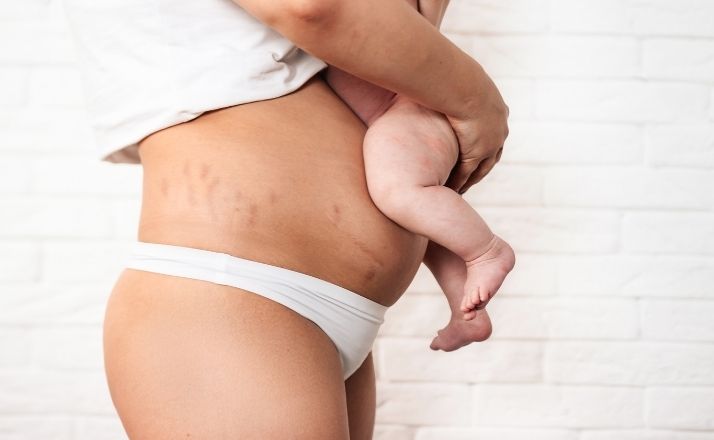 Are these changes permanent?

Unfortunately, there’s no concrete answer here. The degree of body changes after pregnancy varies from woman to woman.

For some women, the changes aren’t that dramatic in the first place and they’re only temporary (for example, if you gained minimal weight and carried relatively small). After a few months, you’d never even know they had a baby.

For other women, some of those body changes are permanent. They may lessen over time, but the physical evidence of pregnancy remains. Sometimes the body changes are noticeable to others, like stretch marks. Other changes may not be visible to the outside world but can impact your day-to-day life significantly, such as damage to your pelvic floor.

It’s very hard to predict which camp you’ll fall into until you’re there. Consider it another fun “surprise” of parenthood!

What if I’m unhappy with my postpartum body changes?

Learning to appreciate your body changes after pregnancy can be a real journey of self-acceptance, one with which I’m all too familiar.

I once had what you’d consider a “ripped” stomach and now, four kids and a serious case of diastasis recti later, it’s closer to actually ripped. As in torn. As in, what the heck happened here?

I won’t lie and say I love the wrinkly, poochy mess that is my midsection. But I will say that I’ve learned to live with it and it bothers me far less than it used to.

If you’re unhappy with your postpartum body changes, there are a few things you can do.

Decide if this is something you need to work on physically or mentally.

If you want to take physical steps to change your appearance, explore what those are. Is it exercise? Is it stretch marks creams, laser treatments, or cosmetic surgery? Do you need to see a pelvic floor physical therapist?

If you decide you don’t need or want to take the physical route, you have some mental work to do. You need to find a way to accept your postpartum body, with all its changes. That might involve journaling, meditating, or meeting with a mental health professional to process your feelings.

Whatever you decide to do, I hope you’ll go easy on yourself. Your body did an amazing thing -– making a whole new person — and that should be celebrated!

This Giant Beach Ball Has The …

We all know by now that being an adult is no picnic. To an extent you’re in control of your … Read More