When I worked in a newsroom and was a million weeks pregnant, there came a day when I clocked out of the office and began my two months of maternity leave.

Since this was my third child, I knew that maternity would mean grueling hours and nonstop tasks and demands, but I welcomed it.

What I didn’t welcome, however, were the snide remarks from folks who viewed my paid time home as a vacation.

So, when I saw a viral video showing data points of what it looks like to be changing diapers and nursing a baby during the first seven weeks of life, I felt vindicated.

The visuals in this TikTok video created by Kristen Cuneo and uploaded by Michael DiBeningno (her husband) are a powerful reminder of how much a baby depends on its parent to thrive.

Let’s be real @lifeof.kristenc is definitely the main character in this house.

Cuneo’s data points video has been viewed 2.6 million times and has attracted more than 350K responses and 2K comments.

Many people took issue with the fact in the United States, maternity leave is relatively rare. According to the U.S. Bureau of Labor Statistics, 77% of private industry works have access to sick time, but only 27% have access to paid family leave.

Other commenters pointed out that despite how impressive the data points showing diaper changes and feedings are shown, it doesn’t show the mountain of other work. 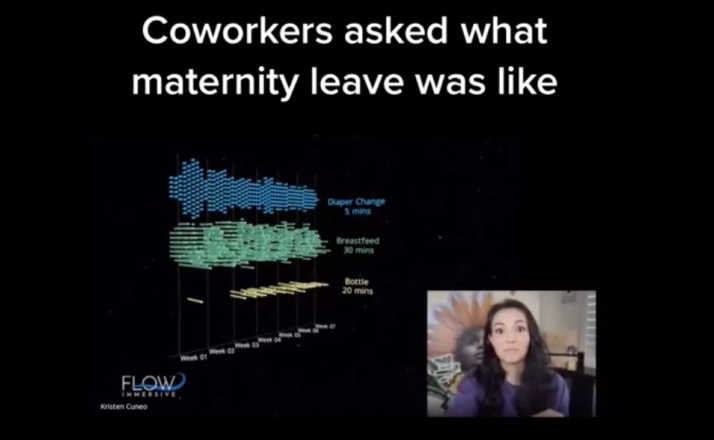 Some examples cited included house cleaning, laundry, basic self-care such as eating and bathing, or the exhaustive task of trying to get a baby to sleep.

Like ‘b hova’ who wrote, “Oh my god, this woman needs to be in front of Congress.”

And ‘Hermit Crab Fun’ who wrote, “And that does not include laundry, bathing, well-baby checkups, getting baby to sleep, fussy baby, or the fact that baby needs to be held constantly.” Um…YES!

This comment was so accurate it hurts. ‘Chels’ wrote, “I bet if you added in self-care, house care, etc., it would just a be a solid cube.”

Cuneo’s viral video is inspiring other data scientists like TikTok user ‘Josie Ege’ who wrote, “Me, a pregnant data scientist 100% prepared to bring this back to work after leave.”

The comments are a wild journey into the emotionally and physically exhaustive world of being a new parent, which has not been lost on Cuneo.

“The response that we’ve gotten has been completely mind-boggling, that so many people can have this experience, and yet something like this could resonate so powerfully for them whether or not they’re currently raising a child or maybe they did 20 years ago,” Cuneo told Good Morning America.

The new parents, Cuneo and DiBenigno decided to use a baby habit tracking app after well-meaning friends had told them that they wouldn’t get much sleep once the baby came.

“We had heard over and over that being a new parent, you never sleep, but it’s hard to understand what that really felt like,” DiBenigno told Good Morning America.

“It wasn’t until we saw the data points and put together this visualization that we were like, ‘Wow, you see that continual, never-ending cycle of the mundane, routine labor of all these things that are just necessary.'”

So, where are we in terms of normalizing paid family leave in the U.S.? Here are some facts to help understand the complicated issue:

The greatest part about Cuneo’s viral TikTok video is that people are talking about just how tough it can be to step into the role of a parent, even if the tasks are mundane as hell.

To be told that maternity leave is a vacation is not only a gross misrepresentation of what parent does all day; it’s also dismissive of the parenting experience and makes it difficult to listen when people say they need to be supported.

In Least Helpful Study Ever, S…

One of my favorite features on TikTok is something called stitching. Stitching is when one creator posts something, and another … Read More

Partner Spending Too Much Time In T…

One of life’s greatest mysteries is not how the pyramids were built or what happens when we die. Oh no … Read More