Christmas is the most joyful time of year and the sooner we start breaking out the decorations, trimming the tree and blasting Mariah Carey’s rendition of “Joy To The World” on repeat, the better. Fight me Scrooges.

Plus, it’s a proven fact that people who decorate early for Christmas are happier.

That’s right all you Pa-Rum-Pa-Pum-Pum party poopers. You might want to try it. It’s SCIENCE.

In a world full of stress and anxiety people like to associate to things that make them happy and Christmas decorations evoke those strong feelings of the childhood.

Decorations are simply an anchor or pathway to those old childhood magical emotions of excitement. So putting up those Christmas decorations early extend the excitement!

And there’s no one more excited than Kristen Amdahl.

In a Facebook post that has gone viral with over 110,000 likes to date, Kristen’s husband Troy surprised her with the Christmas Tree of ALL Christmas Trees. On October 31st. And OMG I dare you not to want to reconsider your Christmas miserly ways and turn over a new “wreath”.

Behold I bring you tidings of great joy.

Troy captioned the photo with the following:

This was last night, not last year. And this was her real reaction. Actually, this was after tears, and after literally jumping up and down. You see, she loves Christmas more than anyone over 12 I know. She loves ALL of it, the Hallmark movies, the decorating, the gift giving, family, the meaning … ALL of it.

For years Troy admittedly tried to resist it. He insisted that there were to be no decorations until AFTER Thanksgiving.

And just in case you did not grasp the full extent of PURE JOY emanating from every pore of Kristen’s body, he reposted the uncropped, original photo to show that “Kris’s love for Christmas extends all the way to her tippy toes.”

And I seriously could not love this more. As for how Troy feels about the Christmas tree being up so early? He writes:

And by her reaction, my only disappointment is that I didn’t do this years ago. Heck, if it makes someone I love this much, this happy, it can stay up all year as far as I’m concerned. #Oola #Christmas ???

Awwww, and he, my friends, just received a lifetime of brownie points.

Troy, you are the sweetest husband ever. This was definitely on the top ten list for surprises in my entire life! I love you.

The response to the post has been overwhelming with 26,000 comments and 95,000 shares, with the majority of people showing it all kinds of love.

As for the other early birds out there? Those among us who are already decking the halls with boughs of holly and Christmas trees? They came out in droves to show Kristen that she is not alone in her love for all things Christmas. 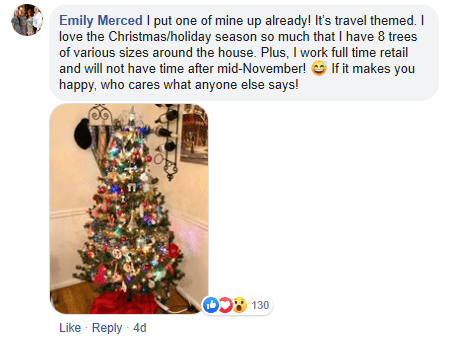 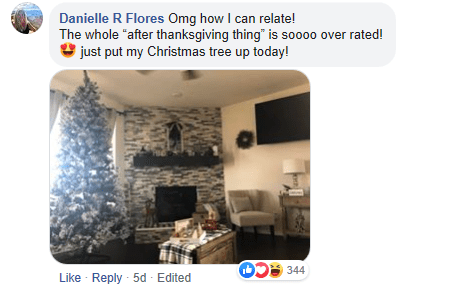 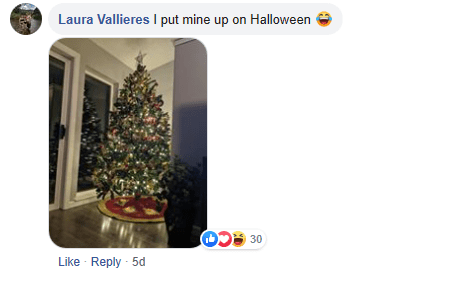 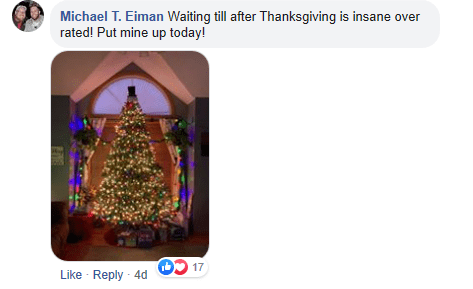 Troy’s gesture even made some people think twice about their own, ahem, lack of enthusiasm for Christmas in November.

I know not all of you are ready to break out the Christmas cheer.

There are those of you thinking, “Oh hells to the jingle bells, NO.” It is too damn early. Can we just get through Thanksgiving first? You will complain about the Christmas merchandise filling the aisles of Costco in October.

You will quickly flip channels when National Lampoon’s Christmas Vacation and Miracle of 34th Street come on for the tenth time.

You will curse the Hallmark Channel in all it’s holiday movie glory.

You will want to stuff your ears with cotton balls and roll your eyes to the back of your head to avoid hearing or seeing anything Christmas related until, at the very least, the beginning of December.

Because honestly, can we all just STOP IT with the merry and bright?

And to you I would just like to say, I have been you. I too have resisted the early onslaught of Christmas paraphernalia lining the aisles of the stores in October.

I have changed the radio station when they start playing Christmas carols in November. It’s even possible that in the past I have waited until December 23rd to put up a tree only to take it down again before New Year’s.

But then I had kids. And apparently, decking the halls makes them happy.

And guess what? I found I was happier too. So say what you want. Go ahead and rain on my Santa Claus parade. It doesn’t matter.

Because I’ll just be over here – sipping my eggnog, watching the lights dance on my tree, singing along with Bing Crosby and Michael Bublé, drowning out your cries of “Bah Humbug,” and reveling in the joy of the season.

And I, my friends, will be happier than you. It’s science.

This was last night, not last year ?. And this was her real reaction. Actually, this was after tears, and after…

Have You Seen the World’…