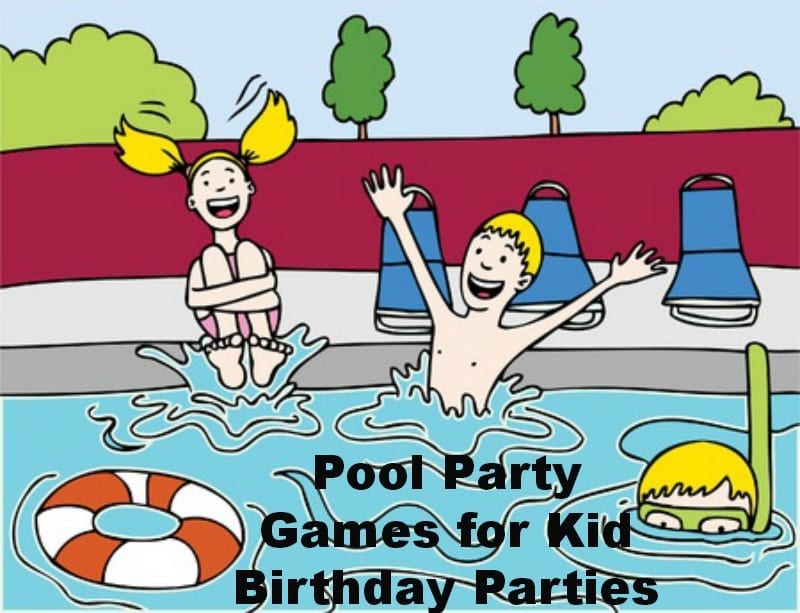 I sure didn’t want to see the kids at my son’s birthday party sitting around looking like they were not having fun. When we had the party at our family pool – the pool was the main entertainment, and fun was in abundant supply. The kids would play for a while on their own, but they still might need some organized games to liven things up. Here are some great possibilities I found:

Treasure Hunt. I had the kids line up on one side of the pool, facing the wall. I told them they needed to listen carefully to see the treasure hit the water, so they could go find it, and it was hilarious to see how quiet they got. Then I threw a bunch of pennies and nickels into the pool and yelled “go.” Game on, and the kids scrambled around trying to see where to dive to find the coins. The person who gathered the most won. Wouldn’t it be nice if they moved that fast to clean up their rooms?

Beach ball racing. This one was especially good for younger kids. The kids swam across the pool, pushing the beach ball with their noses. They had to maintain contact with the ball all the way across. The first one across who didn’t lose their ball was declared the winner. We had a lot of kids at the party – so we organized this game as a relay race. I found some great resources for other pool games, so I can have them for the next party:

Marco Polo. The simple elegance of this game is why it’s such a favorite. Chances are every child at the party will know how to play this one. I just yelled out “Marco Polo,” and they all cheered. One child was chosen as “Marco.” He closed his eyes and counted to 10, and then shouted “Marco!” All the kids had to respond “Polo,” and of course they quickly figured out that if they were underwater, they couldn’t do that. Once “Marco” tagged another child, they become “it,” and the game started over.

Killer whale. One child was chosen to be the Killer Whale, and he got out of the pool. Everyone else jumped in the pool and began swimming around. They had to stay at least 3 feet from the edges of the pool. The Killer Whale then jumped in and swam around, but couldn’t tag someone until he yelled “Killer Whale.” Now the kids could swim for safety, and anyone who touched the side couldn’t be tagged. Whoever was tagged was the new Killer Whale.

Let them play. Here’s something I had to remember. The point of the game was to keep the kids entertained. If they found one they liked – I had to just step back and let them continue. They were having fun, and that was the point. If the game started to wind down for them, then I’d check to see if they wanted to stop for a meal, or be offered a new game to play.

I just smiled and watched when a new game was introduced, as the kids splashed around having a great time in the pool! furthermore, mothers can check lucky patcher app for their kids if they’re using in on their cellphones or not.

Kaitlin Gardner started AnApplePerDay.com to further her passion for a family friendly, green living lifestyle. She is married to her best friend and lives in Pennsylvania. In her spare time, she loves to go hiking, biking and enjoy nature. She just started her first book about living an eco-friendly, healthy, natural lifestyle.


Maid Of Honor Shows Up In T-Rex Cos…

When it comes to optimal health, there are all sorts of immune-boosting supplements on the market these days. Social media … Read More