Anyone who lives in the north resigns themselves to the fact that when winter hits, so does the snow.

We accept that about eleventy-billion hours of our life will be spent shoveling. It’s fine. (This is a lie, I’m totally NOT fine with it. Curses to my ancestors who moved here instead of Tahiti.)

It snows, we shovel. This is the way.

And this is exactly what one woman did in Manitoba, Canada. She just so happened to do it AFTER working a 12-hour overnight hospital shift. And her husband has the picture to prove it. (We’re guessing by now he probably wishes he didn’t.)

A Canadian politician is getting ripped online after taking a photo of his wife shoveling the driveway after working a 12-hour nursing shift.

“Even after a 12 hour night shift at the hospital last night, my wife still has the energy to shovel the driveway. God bless her and all our frontliners. Time to make her some breakfast.”

Even after a 12 hour night shift at the hospital last night, my wife still has the energy to shovel the driveway. God bless her and all our frontliners. Time to make her some breakfast. ?? pic.twitter.com/91vahySLqO

Jon Reyes, an MLA (Member of the Legislative Assembly) and Minister of Economic Development and Jobs from Winnipeg, Manitoba, took the picture of his wife early Saturday morning.

“I should take a picture” pic.twitter.com/ZS3xUvtrSI

Cynthia had just come home from working for 12 hours overnight. She is a registered nurse at the Winnipeg Health Sciences Centre hospital.

Needless to say, the snapshot unleashed a hilarious shitstorm of epic proportions. Twitter has feelings. A lot of them.

And I think it’s safe to say, this didn’t exactly go down the way Jon thought it would.

People were understandably ticked that Jon didn’t, at the very least, go out and help his wife, who had just spent 12 HOURS working in a hospital, during a PANDEMIC mind you, and they didn’t hold back. 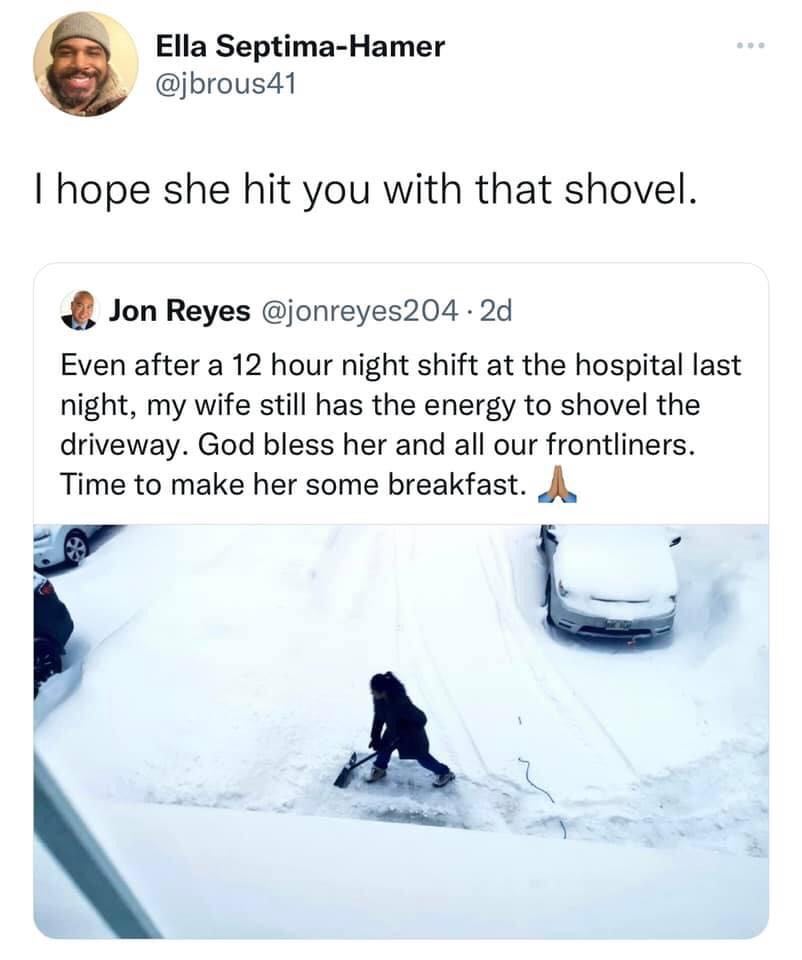 Since posting the tweet on Saturday morning, it has gone viral with over 45K likes, 27K retweets, and 17K comments.

What started as a tribute to his wife snowballed into an avalanche of jokes, memes, and “What in the actual hell, dude.”

Even after a 12 hour night shift at the hospital last night, my wife still has the energy to pack up my belongings and give me till noon to leave the house. God bless her and all our frontliners. Time to make her some breakfast. ? pic.twitter.com/vgMqTbaL1a

It even led to its very own mock Twitter account @WifeJon and a short-lived update of Jon’s bio on Wikipedia.

Twitter lit up like a Christmas tree with people making it crystal clear that they were NOT here for it. Like, AT ALL, with hilarious results. Be afraid Jon Reyes, be very afraid.

It’s one small step for shoveling, one giant leap to divorce court.

You are now known as her 1st husband.

And one foot in the grave…

Even after a 12 hour night shift at the hospital last night, my wife still has the energy to shovel the driveway, AND build my coffin . God bless her and all our frontliners. Time to make her some breakfast.???
?? pic.twitter.com/MmrZY4KU3i

Everyone put shovels out for Jon Reyes’ wife pic.twitter.com/DBovjgQrlP

Others just came with questions, namely, WHAT was the breakfast of which Jon speaks? Pop-tarts perhaps?

“Let me make her some breakfast. Hmm…I wonder if she wants Strawberry or Brown Sugar Pop-Tarts.”

The breakfast he made her: pic.twitter.com/IhmHSYjkMB

Also, is Cynthia for hire?

can we subcontract all snow clearing to jon reyes wife

Still other tweeters called for retributions to be made.

1. We want to hear what you’ll be doing for the rest of your life to make up for this.

And did some dragging of their own:

Even after a 12 hour night shift at the hospital last night, my wife still has the energy to patch the roof after the winds lastnight. God bless her and all our frontliners. Time to make her some breakfast. ?? pic.twitter.com/9VuHg2r7kn

Even after a 12 hour work shift that went to midnight last night, and only 4 hours sleep, my wife still had the energy to change a tire on the QEW this morning. I watched for cars. God bless her. Isn’t she cute. Time to take her for some Timbits. ? pic.twitter.com/2brBs5GQJP

Even after a grueling 12-hour hospital shift, my wife still has the energy to chop down trees and build our home from scratch. Time to go to Denny’s to meet my buddies and tell them about her. pic.twitter.com/y4UBQVaZ52

Jon responded to all of the attention in a statement to the press, saying:

“My wife is amazing, both at home and at work. I’m eternally grateful for her and everything she does. I love her very much I’m happy that she is getting the worldwide recognition she deserves, and it serves as a reminder to everyone – especially me today – that we can never do enough to show our gratitude to healthcare workers.”

Which prompted one person to say what we’re allllll thinking, not only did the woman SHOVEL, but then she had to create a Twitter profile too. Bro.

She worked a 12, shoveled the drive, AND attempted to save his career.

Just my thoughts on my rights to shovel ?… https://t.co/ELauhFNw3R

In all seriousness, Cynthia explains in her Facebook post that people have got it all wrong. She says that she did, in fact, WANT to shovel. She actually enjoys doing it.

“As I pulled up to my driveway, I felt energy to shovel the snow that fell all night and into the morning.

As many Manitobans and Canadians know, it’s a great workout, it allowed me to unwind, it’s refreshing after having worn an N95 mask almost the entire night, the weather was mild and it was quiet and peaceful.”

She goes on to say that everyone in the family pitches in and shares different chores, “not based on any gender; but mostly on who is available to do it.”

She further states that it was “really not a big deal” and it’s just the way they roll – Jon loves cooking and she loves shoveling.

Lastly, what was said by my husband on twitter was honest, genuine and sincere, this made me realize that I am grateful that he appreciates what I do and that he loves me and shows it publicly, this is nothing new.

I am proud that he is unapologetically himself. So NO as per Twitter I will not be divorcing him over shovelling as many have recommended.

(Still, Jon may want to forego getting her a new shovel for Valentine’s Day.)

There’s no denying that our healthcare workers deserve ALL the praise, pandemic or not. They put their hearts and souls into taking care of others and, based on the response to this tweet, it’s obvious that people feel like they should be taken care of too. (You might want to start by doing the shoveling.)

You can check out more of the hilarious tweets here.