Anyone who has ever owned a cat knows the truth – you don’t own them, they own you.

Sure, you may *think* they’re your pet, but the reality is that the second you bring one into your home, it’s game over. You’re living in their world now and the sooner you accept it, the better.

No one knows this better than two women from Victoria, British Columbia.

Jessica and Nikii Gerson-Neeves are the self-professed “devoted servants of a trio of cats.”

Do not let their adorably cute appearances fool you. What these kitties want, these kitties get no matter who they have to victimize to get it. And what they want? Is a Vitamix blender. Or, more accurately, the box it’s ensconced in.

In a hilariously epic Facebook thread, Jessica and Nikii share the “tail” of their three cunningly diabolical cats commandeering their new blender in a weeks-long standoff.

And this is exactly why I have a dog.

On Black Friday, the couple purchased the Cadillac of blenders, a Vitamix, from Amazon. They had coveted one for years and were excited by the prospect of smoothies and soups.

The cats, on the other hand, were not. Little did the unsuspecting couple know, their three floofy felines were plotting a hilariously brilliant coup d’état.

It all began on the day the Vitamix arrived. The Vitamix-thieving terrorists wasted no time in taking the blender hostage.

As soon as the couple put the box down on the kitchen floor, “just for a second,” Max seized his opportunity. He promptly took up shop atop the box and claimed his rightful place upon the Vitamix throne.

And that folks, was the beginning of the end.

The couple is sharing the whole sordid saga, dubbed ‘The Great Vitamix Incident of 2021’ and/or ‘Appliancegate’ in the private Facebook group, THIS CAT IS C H O N K Y as well as on their Facebook page, Tempermental Chucklefuck and Friends.

It has quickly gone viral. And for good reason. It’s funny AF.

They provide daily updates, with photos, on the escalating hostage situation, starting with this one on Day 1:

The second hour quickly turned into the second day.

An attempt to bring in a hostage negotiator was made on Day Two with decidedly unexpected and disappointing results when the “negotiator” turned out to be a double agent.

The situation continues to deteriorate, as the questionably sentient dust bunny called in as hostage negotiator convinces sentient soccer ball to decamp, only to reveal that it was a bait and switch.

Sentient potato negotiator intern proved to be no help at all.

Middle aged lesbians, when asked for a quote, sat down in the middle of the floor and said “God fucking dammit, you guys.”

Notice the complete and blatant disdain and disregard of the human’s sad attempt to exert authority with a finger pointing “get down.” Clearly these cats know who’s boss. (And it’s not the human.)

Day 3 of the standoff would prove to be no better. The dastardly dictators continued their display of dominance. Although cat-fighting over who should have ultimate control *may* potentially lead to their downfall.

Then again, maybe not.

Day 4 saw the return of the King, as he now likes to be called probably, and the stand-off has officially come full-circle.

It’s possible that at this point, the couple has moved out of the bargaining phase and is becomingly increasingly desperate as one has taken to locking herself in the bathroom and the other has resorted to “fervently praying to the patron saint of queer cat lovers, Freddy Mercury.”

We send them our thoughts and prayers.

His face says it all.

Days 5, 6, and 7 all saw a continuing battle of the bulges as all 3 furry little terrorists are unwilling to concede.

Not even the promise of treats or the arrival of Christmas was enough to convince them to just give it up already.

The stalemate continued with the cats remaining on 24-hour guard. At one point, Jessica even got up in the middle of the night to try to claim the box. The cats were ready for her.

After numerous attempts at bribery, deception with decoy boxes, and an untold number of “Here kitty, kitty,” the MALs decided they needed to bring in reinforcements.

Two and a half weeks into “Appliancegate” the women decided to reach out to Vitamix in a desperate plea to end the madness.

They posted a letter to Vitamix’s Facebook page explaining the situation and asking for three empty Vitamix boxes. 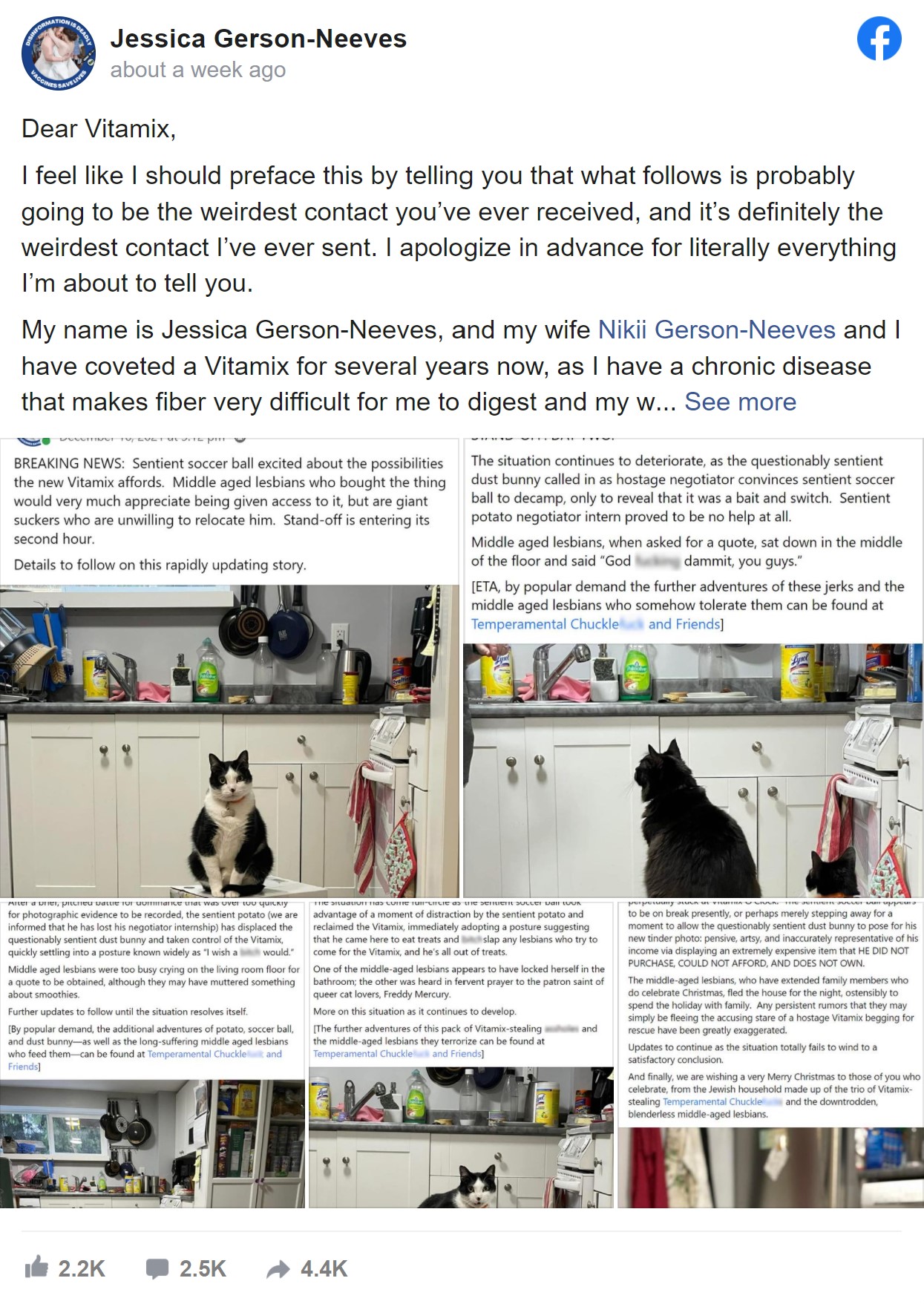 We write to you because it has become clear at this point that without herculean intervention, we’re never going to get to use the new blender we’ve been longing for for years.

Despite what many people have suggested, we aren’t writing to request additional Vitamixes—that would be ridiculous, and while we’re definitely ridiculous, we’re not quite that ridiculous.

Jessica went on to explain that other cardboard boxes seem to lack the appeal of the Vitamix box. She fears that without intervention, the stand-off, “much like your wonderful blenders” is “Built To Last.”

She ended the letter with “desperation and many, many apologies.”

Vitamix heard her cries for help and immediately responded to the cat-astrophe. 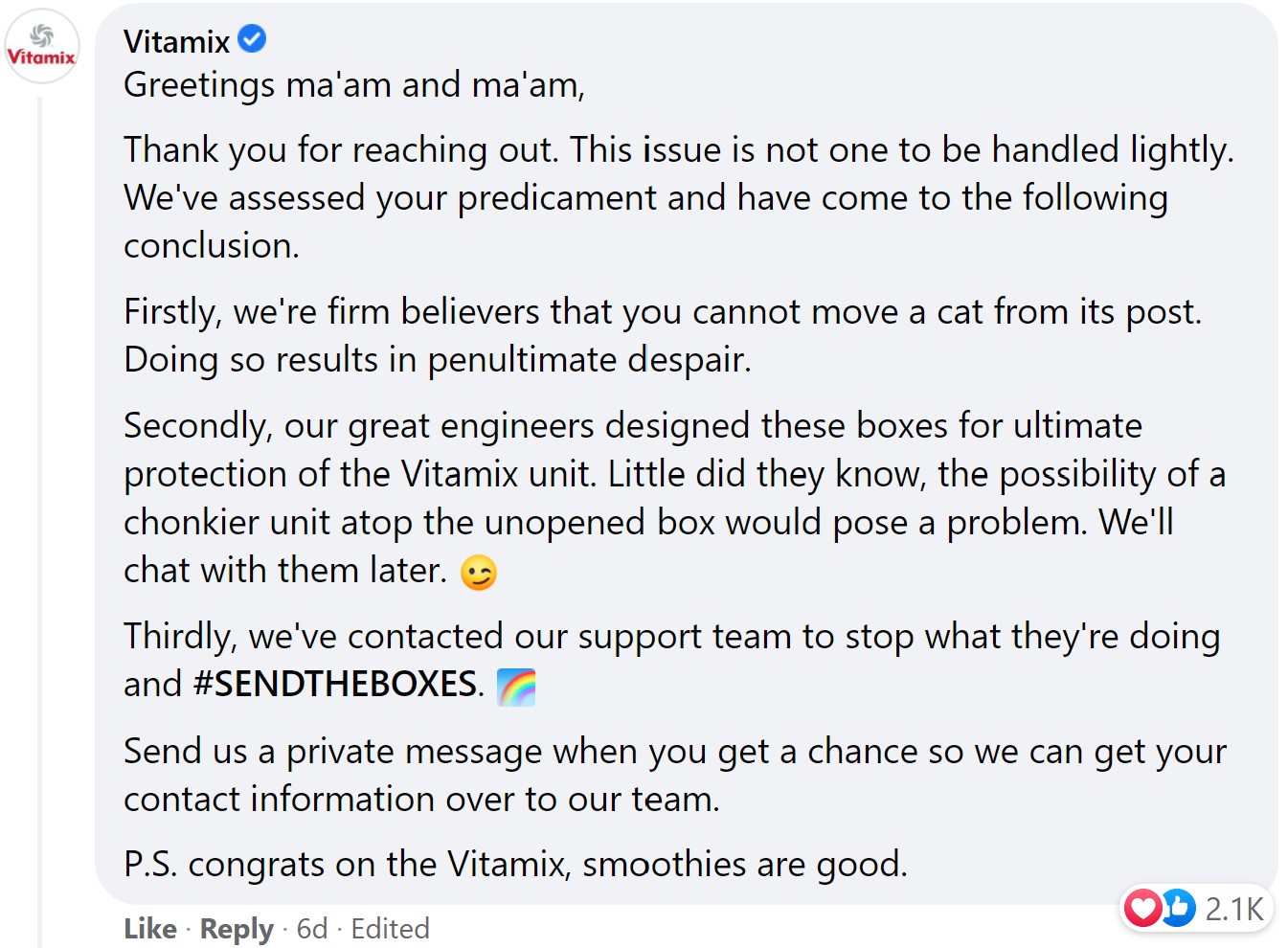 Boxes were shipped and not a moment too soon. Things in the Tempermental Chucklefuck household had turned. Treaties have been abandoned. It’s every cat for himself. It’s Thunderdome now. 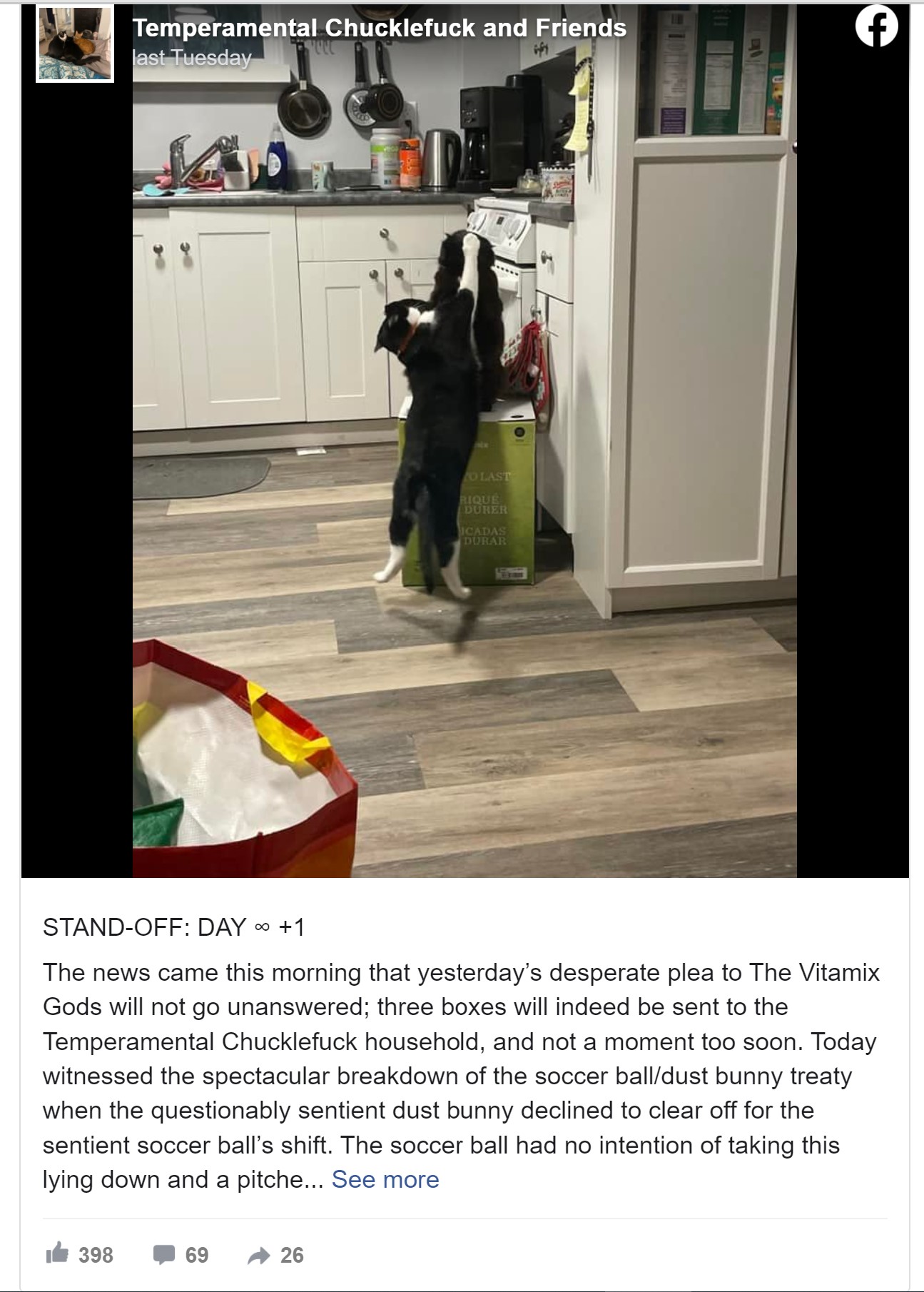 However, it seems that hanging all of our hopes on the introduction of new blood may have been premature.

The latest update in the continuing saga reveals that these cats are too damn smart for their own good.

While the first decoy box appeared to initially work, alas, it did not last long. 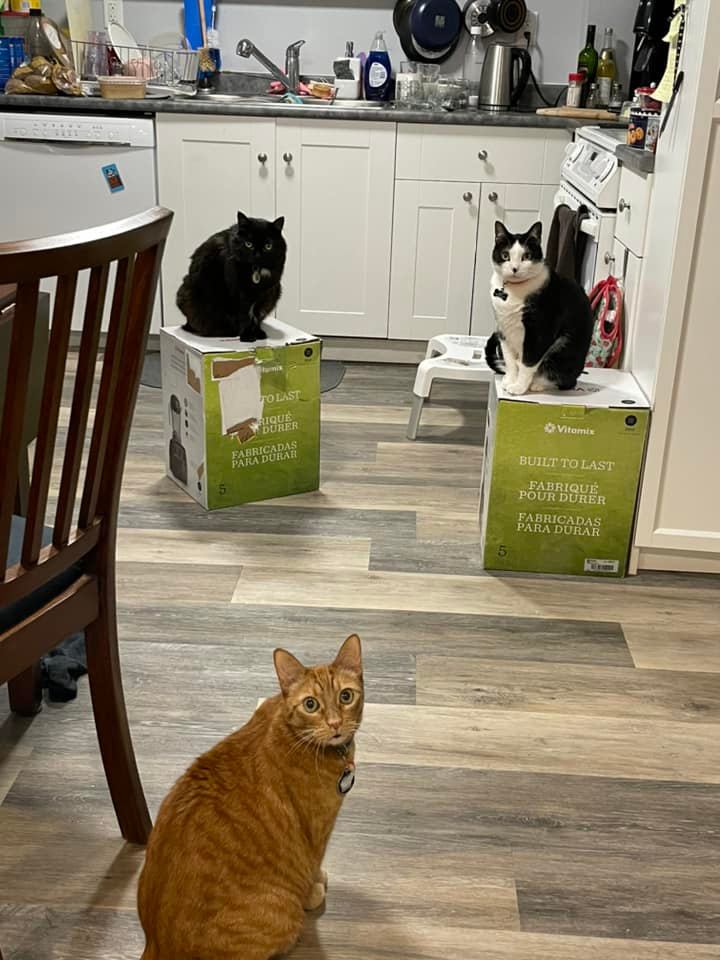 According to the most recent report, the sentient hostage-takers have sniffed out the imposter.

“Today’s developments bring into question the odds that the much anticipated solution will indeed bring the saga to a close, as Decoy Vitamix Box #1 (hereafter known as DVB1), while it initially captured the interest of the sentient hostage-takers, seems to have rapidly been recognized as a mere shadow of the One True Box (hereafter known as the OTB).” 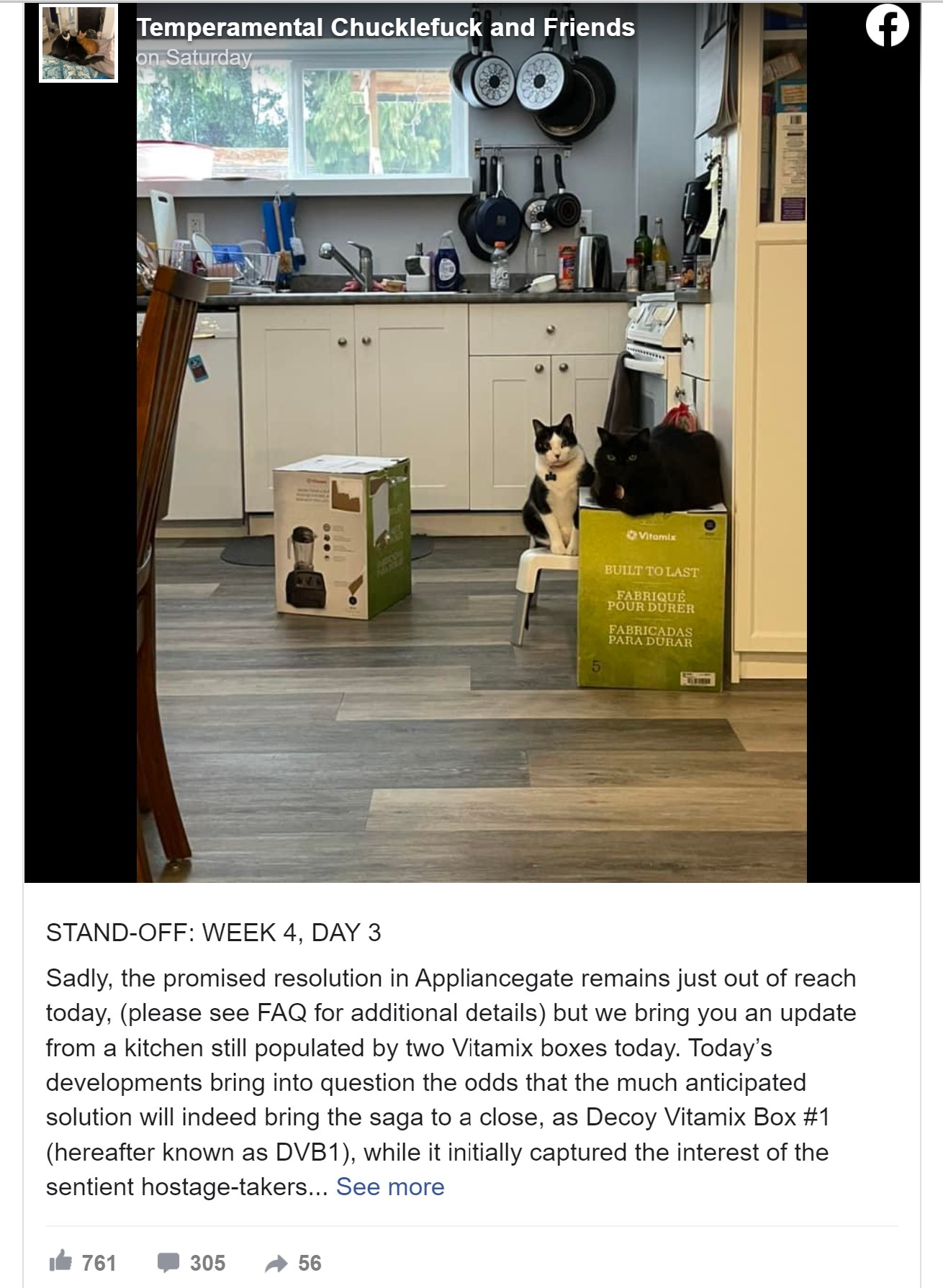 And so the saga continues…

In an interview with the Washington Post, Jessica and Nikii admit that the battle royale could easily be resolved by simply lifting the offending feline off of the box.

But where would the fun be in that?

“This is just so silly and sweet and kind of wholesome. And if our cats and me thinking I’m funny are providing that fun, why on earth would we interrupt that? Like, the blender will still be there.”

So for now, Jessica and Nikii will forgo the smoothies and eat homemade ice cream instead.

As for the rest of us? You can follow along with the criminally insane chonks and their hilarious hostage takeover on their Facebook page, Temperamental Chucklefuck and Friends. You can check it out here.


Instead of Netflix and Chill, SNL S…

I love my iPhone. And by love, I mean LOVE. My phone is nearly always in my hand, and I … Read More