Maybe it’s the slightly crazed and manic expression I wear on my face when I go out with all four children in public, or maybe it’s the way my shoulders droop towards the ground with exhaustion like an elderly but equally disheveled and flat chested Captain Caveman, but people seem to always stop when they see me with the four babies, stare, and say, not unkindly,

“Boy, you sure do have your hands full, don’t you?”

Or maybe it’s that quite often my hands are literally full – piled high with snacks and drinks and crappy toys made out plastic and discarded shoes and ponytail holders and piles and piles of garbage that for some unbeknownst reason must always be handed to me rather than just put into the receptacle designed explicitly for this purpose.

I never know though how to answer this. Is it an actual question?

I don’t even know if it’s meant to be an insult or a light-hearted observation or even a compliment, something very American-esque about how incredible I must be at multitasking if for no other reason than because I have clearly had unprotected sex at least four times.

I am, in fact, not good at multitasking.

I am not good at any of this, not by a long shot.

It’s the reason you don’t see me often out in public with all four of them, honestly. Because by the time evening rolls around and I’m done working and the children have been mostly fed and maybe wiped down, usually I am lying exhausted on the floor in my house with someone’s poop or vomit on my shirt trying to muster the strength to crawl towards the garbage can so I can dispose of the most recent gross thing that has been handed to me by a passing child.

So yes, I guess you could say I have my hands full.

Thing is, we all do. Raising kids is hard. I’m sick of pretending it isn’t.

I’m sick of apologizing for the times I have said it is. Are there things that are harder? YES. Absolutely.

There are terrifically terrible things that happen to incredible people in this life and if you sat for too long and tried to make sense of all that it would break the hearts of even the strongest among us into little pieces next to me on the floor.

But this isn’t a hardness competition, and saying that this–just regular, everyday life of parenting–is hard, doesn’t mean that stuff isn’t hard. Or harder. The hardest, maybe. Probably.

I don’t know for sure because this right here and right now is the only life I do know: this life with four children where I work and try really hard to serve everything well: my husband and my children and my job and my friends and my community and myself and everything else.

Guess what? I can’t.

I simply cannot be amazing at everything.

I want to line the edges up perfectly in every facet of my life, buff it all to a gleaming smudge-free shine and tuck it all neatly into a freshly made bed every night, satisfied that I did my best.

This is a life of making space for the most important things by carving and scratching and clawing.

It’s a life of crawling sometimes and running others and half-assing almost everything.

It’s catching up on email while I pee and also while I do my eye makeup, and sometimes dropping the phone in the toilet as a result.

It’s promising my husband I will wake him up later after the kids are asleep so we can spend some time alone together only to wake up the next morning still in my work clothes with creases from the sofa permanently etched into the collagen-challenged skin of my face.

It’s having to say no to people and places and events I really want to say yes to and accepting that the chance might not come around again.

It’s having to cancel other things at the last minute so many times that even the strongest friends will start to wonder if it’s on purpose. 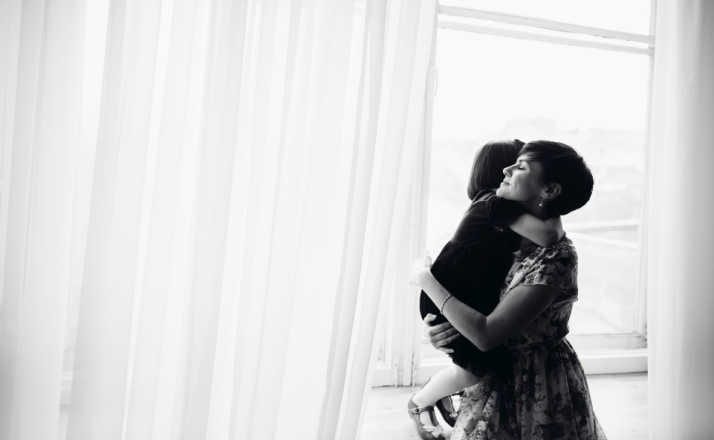 It’s almost always wondering if everyone is hanging out without me and it’s missing those friends with an ache and a need so real and raw that I’m half tempted to book an impromptu all-inclusive trip for all of us that I can’t afford and leaves tomorrow.

Not yet, of course, being the refrain of the song of this life.

Time alone with my husband? Not yet. Girl nights on the regular? Not yet. Finishing the book I’ve been writing for longer than I’d care to admit? Not yet. Losing the baby weight? Not yet. Sleeping through the night? Not yet.

It’s a life that by virtue of its chaos is passing by so quickly that we want to grab it by the lapels and pull it down onto the ground with us and force it to slow down so we can both take a breath and maybe, for a second, appreciate its glorious beauty.

Because it’s a life we would do all again, if given the choice, isn’t it?

If the Ghost of Motherhood Past came blowing through right this second and took us on a journey backward wouldn’t we pick these very same people out of a long lineup of options, even if they were covered in dirt and scabs and food stains and had peanut butter smeared in their hair?

Wouldn’t we grab them all up in our hands and drag them home so fast we would just be a peanut butter scented blur to passersby and they would barely have time to take a second glance before calling out after us: “Boy, you sure do have your hands full, don’t you?”

Of course we would.

Because there’s room in this already full life to also cram in this truth: that we can love it vehemently and wholly while still nodding in solidarity to each other when someone stands up (or raises a fist weakly from the floor) and says “Hey, this is hard.”

We can love this hard life so much that when and if the Ghost of Motherhood Future came to visit us lying there on the floor with garbage in our hands and asked us if we wanted to just fast forward right into that quieter and less chaotic future, I know without hesitation we’d all shut her right down with those two simple words:

This post originally appeared on Liz’s blog, Lizpetrone.com Liz is a writer, blogger, teller of stories, believer in truth, and mama to four. She shares her stories on lizpetrone.com and all over the Internet, and recently finished a sloppy first draft of her first book. She can also be found on Facebook, Instagram and Twitter.


High School Senior Chooses His Own …

CDC Claims Kids Are Using Too Much …