40 means middle-age is firmly in effect. It means stiff back muscles, bills, grey hairs cropping up, schlepping kids to & fro all over the blessed earth, and feeling responsible for all.the.things. I mean, this is 40, right?

While some women approach their 40th birthday with reluctance, others take a “go big or go home” approach, & make the most of it.

A video clip of one woman’s 40th birthday reveling is going viral because THIS is how turning 40 should be celebrated: plenty of mimosas, inflatable costumes, & BFF shenanigans. When Devyn Goss of Yucaipa, CA turned 40, her crew of friends wanted to ensure that her special day was indeed special. After a few months of social distancing, cancelled parties & too many Zoom sessions, this crew decided they needed to celebrate with a major blow-out…

…or should we say blow-ups??

A good costume can go a long way in making things more entertaining, as Devyn herself knows quite well:

Since March, when we all started working remotely, I began dressing up in costumes to lead my zoom sales team meetings every week, so my team would be encouraged and we would have some fun.

Clearly Devyn has a cheeky sense of humor, & the same goes for her crew of besties. When her 40th birthday rolled around, her friends decided to make it memorable.

After conspiring with Devyn’s husband to send her out of the house on errands, her pals snuck into her house to decorate & to slip into their party gear.

(And by “gear”, I mean their inflatable costumes. Because while your run-of-the-mill costumes are fun, inflatable ones are so.much.better.)

Devyn returned home to find her pack of pals frolicking on her front lawn in their inflatable best, with mimosas in hand, because par-TAY!

Sharing is caring, so her friends were all set with an inflatable costume all ready to go for Devyn (and even one for her daughter!).

Brunch & mimosas with friends in inflatable costumes = EVEN MORE FUN!

While the 40th birthday celebration on Devyn’s front lawn was obviously a blast, this fun crew became #BBFgoals when they decided to take their inflatable costume party on the go.

Devyn & her fantastic friends took to the streets in their “birthday suits”, parking themselves on the side of the road just outside Devyn’s house in order to share their joy.

And ladies & gentleman, THIS is 40. Well, it should be, because this is the best frigging way to usher in 40 that I’ve ever seen:

I can say with utter certainty that if I was driving by & saw this splashy spectacle on the side of the road, I’d be crying tears of joy as I pulled over because I knew I’d finally found MY tribe.

Then I’d rush home to grab my T-rex inflatable costume -which HELL YES I OWN AND WEAR- and finally join my people. And they’d hand me a mimosa & say, “Welcome home, little T-rex. Start waving!” I mean, a girl can dream, no??

In case you envy the car passengers that were treated to this 40th birthday inflatable roadside extravaganza, no worries- there’s video, too.

If you watched this clip with a mixture of laughter & pangs of envy, you’re in good company. Devyn’s TikTok post currently has over 319K likes and 6K comments, the vast majority of which are from women who want friends just.like.this.

That dino crown screams, “IDGAF!”… and I LOVE IT.

Agreed- the unicorn trot is the BEST, and can we be friends? (No, seriously. I need people like this in my life.) 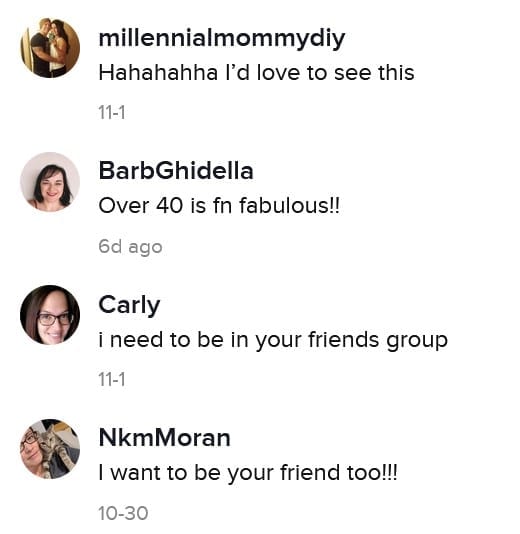 Devyn & her fabulously fun friends are truly #BFFgoals; she gave them credit for not just knowing her so well, but planning a birthday that was so uniquely HER:

The whole thing was right up my alley – and that’s why my friends need a massive shoutout – because many of them are not as excited to dress up as I am – but they knew how happy I would be.

While we all love their obviously fun friendships, the video is also a refreshing reminder that age really IS just a number- silly shenanigans don’t have too stop simply because you’ve hit the big 4-0.

In fact, age can even enhance the (financial) fun:

Devyn & crew seem like the type that would welcome any fellow roadside inflatable recruits, but if you’re not in Yucaipa area, at least know that there are many, many, MANY women out there that are apparently just like you (*me*) that would totally slip on an inflatable, slug a mimosa, & hit the streets for fun birthday tomfoolery with you! As if shortages hadn’t already been a giant pain in the derriere, now menstruating people are having to pay gauged … Read More