The issue of food allergies in children is a topic that is obviously of critical importance to parents. If you’re the parent of a child with a severe food allergy, then you know the fear you have felt while trying to prevent your child from accidentally being exposed to the dangerous, possibly life-threatening allergenic food.

But what if you don’t yet know if your young child is allergic to any particular food? There’s a lot of uncertainty surrounding just how & when to expose your baby to these allergy-prone foods, or even if you should at all. While the past recommendations have been to delay feeding your child allergenic foods, the new guidelines released on Monday are flipping the script on its previous standard.

The American Academy of Pediatrics conducted more recent studies on food allergies, and now states that exposing babies to allergenic foods prior to four months of age can possibly prevent the development of a potential allergy, even in children at high-risk for allergies.

This is obviously a HUGE shift from their prior recommendation, which had been to delay a child’s exposure to potentially allergy-inducing foods for as long as possible.

So why the sudden shift?

Back in 2000, the American Academy of Pediatrics recommended that parents wait until one year of age to give their child cow’s milk. Eggs were to be delayed until the age of 2, and other allergenic foods (think fish, shellfish, tree nuts) were be be delayed until age 3.

Now while many parents did not subscribe to these guidelines -myself included!- , the premise was that avoiding exposure to the food would prevent a food allergy from developing. It ideally gave the child’s body adequate time to build up an immune system that could properly handle the allergenic food once exposed to it. 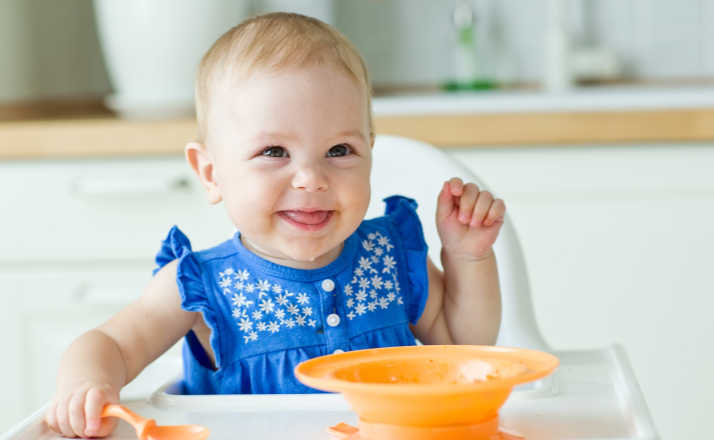 Recommendations were to avoid allergenic foods until children were older. The thought process at the time was, well, if we avoid any exposure, maybe the allergic response won’t develop.

(But as any parent of an older child that has experienced severe wheezing after eating their first peanut can tell you, this premise was clearly flawed.)

In 2008, The Academy modified their approach when they stated that there was not sufficient evidence to support that delaying allergenic food prevented food allergies. It became a period of trial & error for parents regarding if & when they should expose their babies to various allergenic foods; a lot of uncertainty and hesitancy surrounded the decisions… especially if the parent or a family member suffered from a food allergy.

But here in 2018, evidence now apparently supports the idea of exposing children to these foods, and early on, too.

The Academy’s new recommendations are based on two main food allergy trials conducted within recent years:

Although this trial was acknowledged to have some inherent flaws -less than half of the parents were consistent in maintaining their child’s continued exposure to the allergenic foods– the research was clear that for the children whose parents DID maintain the feeding, there was a significant reduction in the development of food allergies.

So how does this apply to us?

The American Academy of Pediatrics’ current recommendation is to feed your baby the allergenic foods, and early on, too.

According to Dr. Scott Sicherer, one of the report’s authors,

There is no reason to delay giving your baby foods that are thought of as allergens like peanut products, eggs or fish.

What about those with a family history of food allergies? Well, the current findings indicate that the new “early feeding” concept has proven to minimize the development of food allergies in young babies, including infants that are considered to be high-risk (meaning having a close relative with a food allergy).

I recently had a conversation about this very idea with my sister; she has been given similar advice by her pediatrician, but, like many parents, was hesitant to give her son peanuts in fear that he’d go into anaphylactic shock.

And it’s a reasonable concern, because nothing is more terrifying than the prospect of your child having a life-threatening food allergy… especially if you don’t know he or she is even allergic! 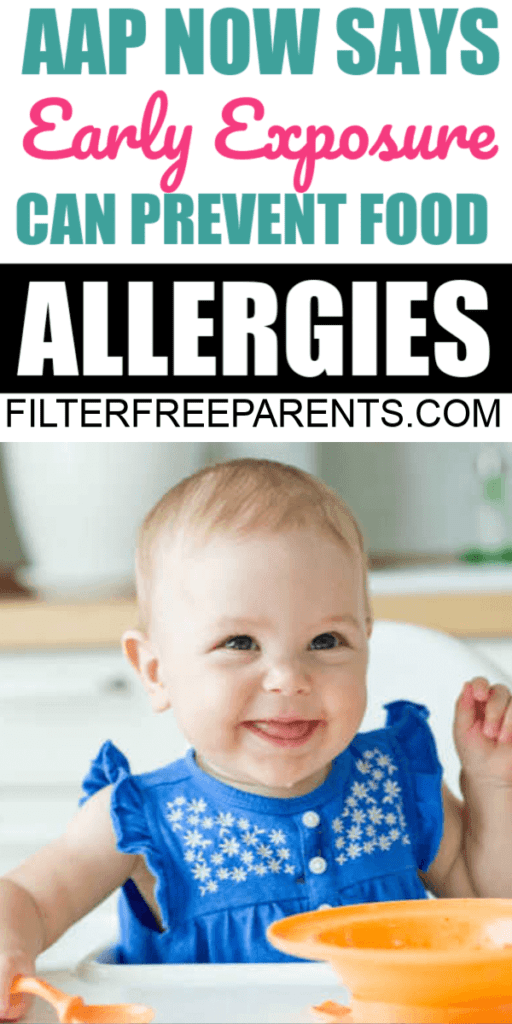 According to Dr. Stutkus, most young infants do not experience anaphylaxis in the same way as their older counterparts in terms of obstructed airways & breathing difficulties.

He claims that an infant of 4-6 months of age that is severely allergic to a food will likely manifest symptoms of hives and/or vomiting (and obviously suggests that parents still seek medical attention promptly in that case).

The bottom line regarding this study is that parents are recommended to do away with the old practice of delaying allergenic foods, and essentially jump right in with them.

As Dr. Swanson, a pediatrician at Seattle Children’s Hospital, explained her take on it when interviewed by CNN:

We come from a place of restriction and medicalization. No, I don’t want you to be cautious. In fact, waiting might cause harm.

Although I think dispelling of the fear surrounding food allergies is a benefit of this recent finding, I’d still recommend that every parent consult his or her child’s pediatrician before proceeding with this recent guideline.

Many pediatricians also offer parents the opportunity to allow their child to be exposed to an allergenic food in their office, under a medical professional’s watchful eye, which would be a comfort to those who are still -like me- slightly skeptical that this recommendation is the surefire answer to the food allergy issue.

Can You Breastfeed With Flat Nipples?

Smartphone Addiction Is Such A…