Remember when the internet was new? Well, that’s the most old-person thing I’ve said in a while. Gather ‘round, young ‘uns, I’ll tell you about a time way back in the last century when there was no internet and we had to use these things called encyclopedias, magazines, and telephones.

But seriously, remember when the internet was new?

That was some exciting shit right there. I remember when it was called “telecommunicating” and we had to download it in large packets of information. Now, I forget how to use the fingerprint login on my phone, but somehow at THIRTEEN I could navigate the ancient relics of internet coding.

Despite the internet being new in our lifetime, and how revolutionary that is, everything we used to do is as dated and irrelevant as crimped hair and jelly shoes. The kids now have their Instagram and high speed everything, but we have our memories. Remember what the internet was like for us? 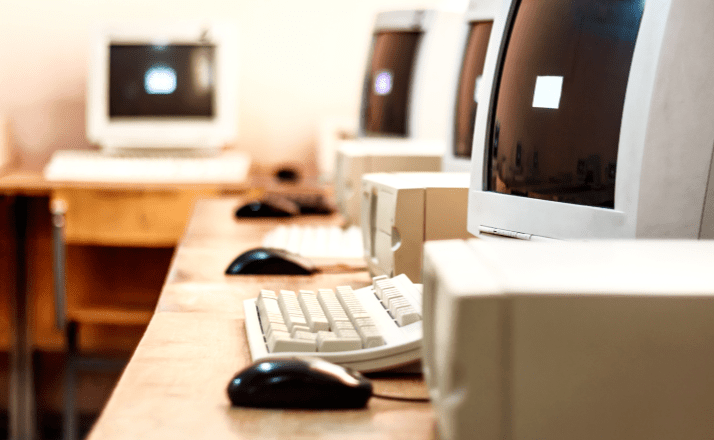 Okay, so, full confession – I am the only person left on earth who still uses Hotmail. Not only that, I have the same email address I had as a teenager, back when Hotmail first became a thing.

Getting on the internet used to require listening to your modem sing you the song of its people. That was the price of entry into the Internet Kingdom. “Oh, you want to come into our exclusive club? What’s the secret word? Beeeeep, booooop, kkkkkkkkkkkksh, rrrriiiiiiiiiiiiiiieeeeeeeee. That is correct.” Anyone over the age of thirty has that sound permanently etched into their brains. Admit it, you heard it in your head just now.

If you didn’t have a website that played a midi file of your favourite 90s song, had words that flashed and rotated, and included a row of dancing hamsters or bananas, did you even internet?

We had a rule in my house – every fifteen minutes, I had to get off the internet and look to see if there were any answering machine messages. Then I got to listen to the modem song again. And TEXTING wasn’t a thing, e-mail wasn’t even that popular yet, so people in your house actually used the phone to talk to people. This greatly cut into my GeoCities browsing time.

Just to be clear, these weren’t cool. But I loved them. I spent hours on IRC as an older teenager. In fact, I met my husband in one – a fact I didn’t willing admit until recently when online dating became destigmatized. I wasn’t in chat rooms to date, I was in there being a giant nerd, but apparently GIANT NERDS CAN FIND LOVE where they least expect it. We met at eighteen, and we’re still together twenty years later, so don’t knock chat rooms til you try ‘em.

Uh-oh! That flower turned into a flashing Post-It Note, that means you have a new message! ICQ was the shit before texting became a thing. I still have a visceral reaction whenever I hear that uh-oh sound file.

Nobody used their real name for their username in the early days. Everybody on the internet except you was a pervert or a serial killer. Never, ever, ever use your real name. When my dad got me set up on the internet, he decided to protect my innocence from these creepy dudes by giving me a new name – Roxy.

That totally didn’t attract any creeps at all.

Want to see plain text? That will be three minutes. Want to see a picture? Might as well go make a coffee, we’re going to be here a while. And we didn’t just see a loading icon like we do now when something is taking a while – pictures loaded a line at a time. It was like a 90s guessing game. Is that a head? A shoulder? A buffalo? Wtf am I waiting to see?

Yes, the internet has changed. When we discuss this amazing new technology from our youth, it’s basically like our grandparents describing a Victrola as though mere years ago it was cutting edge and revolutionary. But as our children swipe left, Snapchat filter, and text in real time, they can thank us for being the internet guinea pigs, and sparing them the World Wide Web’s awkward teen years.

This Giant Beach Ball Has The …