Kids with picky palates can be a real challenge for parents. Ideally, we want our kids to eat a wide variety of nutritious foods. And while some kids are game to try new things, others refuse to take even a bite.

Toddlers are notorious for boycotting new foods, seeming to live on air alone. For some, it’s their desire for control. For others, it’s a genuine dislike of a particular food (or food group).

Some kids have food sensitivity issues. Whatever the reason, it can be really tough to ensure that your child maintains a healthy diet.

But based on recent revelations, it turns out that extremely picky eating can cause major, irreversible damage.

A teenage boy is now permanently blind, & researchers believe that his condition is due to his daily diet, which consists of: Pringles, white bread, french fries, and occasionally processed ham & sausage.

I’m not sure what’s scarier: the blindness, or the diet in the first place. The teenager, who has not been identified publicly, went to see a doctor for the first time at the age of 14 after reporting symptoms of chronic exhaustion.

After thorough bloodwork revealed anemia and extremely low levels of vitamin B12, doctors initially recommended B12 injections and a nutritional overhaul as the proper course of action.

Important to note:  the boy’s severely picky diet was not specifically mentioned at this point. Although his lab results indicated that his body was lacking in certain areas, doctors did not know that he only ate a handful of different foods.

Despite his poor diet, the boy did not look physically malnourished, and both his height and BMI (body mass index) were within normal ranges.

So even though he LOOKED fine on the outside, what his diet was doing to him on the inside is really alarming.

A year later, the boy returned to the doctor with slight hearing loss and “vision symptoms”. As doctors puzzled over his condition, he continued to lose his eyesight, becoming permanently blind this year at the age of 17.

It was at THIS point -after a battery of tests & interviews ruled out alcohol/drug use, family history, disease, etc.- that the boy was specific with his medical team about his daily diet.

They knew he had been a “fussy eater” for over a decade, but they had no idea how fussy an eater he really was.

Ophthalmologist Dr. Denize Atan reported to the BBC that the patient explained his food choices consisted of:

His diet was essentially a portion of chips from the local fish and chip shop every day.

He also used to snack on “chips” (Pringles) and sometimes slices of white bread and occasional slices of ham, and not really any fruit and vegetables.

The boy also explained that he has an aversion to many foods due to their texture, and that potato chips and french fries were among the few foods that he felt he could eat.

Unfortunately, the boy’s extremely poor eating habits seem to have been the main contributing factor his blindness.

Doctors were stymied by the boy’s case, and researchers eventually concluded that he was suffering from nutritional optic neuropathy, which is damage to the eye’s optic nerve due to malnutrition.

Now in some places of the world, there are cases of nutritional optic neuropathy, particularly in areas of poverty or drought. But in developed nations -such as England, the boy’s native country- it is extremely rare.

While medications can interfere with a body’s ability to absorb nutrients properly, it’s very unusual for an individual to experience this condition based solely on his or her dietary choices.

What’s also heartbreaking is that if the condition is caught in time, it can be reversible. In the boy’s case, however, he continued to consume the same exact foods, & it resulted in permanent damage.

Dr. Atan and fellow researchers concluded that this boy’s plight is an important cautionary tale for all parents to ensure that their kids are really eating as balanced a diet as possible.

In their report, published in the Annals of Internal Medicine, they state:

This case highlights the impact of diet on visual and physical health, and the fact that calorie intake and BMI are not reliable indicators of nutritional status.

The participation (or lack thereof) of the boy’s parents was not mentioned in the study, so we can’t be sure how much awareness and/or intervention they had regarding this situation.

But it’s genuinely tragic that this boy now faces a future without sight due to an issue that could have been rectified much earlier.

Some physical conditions are not preventable, but this is not one of those cases. While picky eaters have always existed and will continue to, we owe it to our kids to do everything in our power to keep them as healthy as possible.

We need to supervise their diets, and seek outside help if the dietary struggle goes beyond what we can navigate on our own. 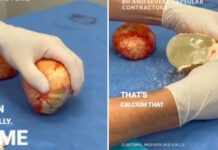