I got suckered into volunteering at the school cafeteria again.

It’s a two-hour time period in which a rush of children in KINDERGARTEN to eighth grade phase in and out with tornado force– eating, spilling, screaming and obliterating the linoleum in a 200-square-foot room. Because my children go to a small, private school, there isn’t a ton of cash floating around to help the few part-time paid employees who brilliantly attempt daily lunch duty.

So they rely on parent volunteers every day. I know there are many parents whose work schedules don’t allow them to come and volunteer. To you, I say– you lucky freaking duck.

I wonder if you can go to hell IF YOU LIE ABOUT HAVING PLANS instead of agreeing to come put in a couple hours at your kid’s school. I think yes, I’ll definitely go to hell if I lie to this sweet lunchroom lady, so I always go in to help. I’ve been there about three or four times this year.

I think I’m starting to look really good in an apron. 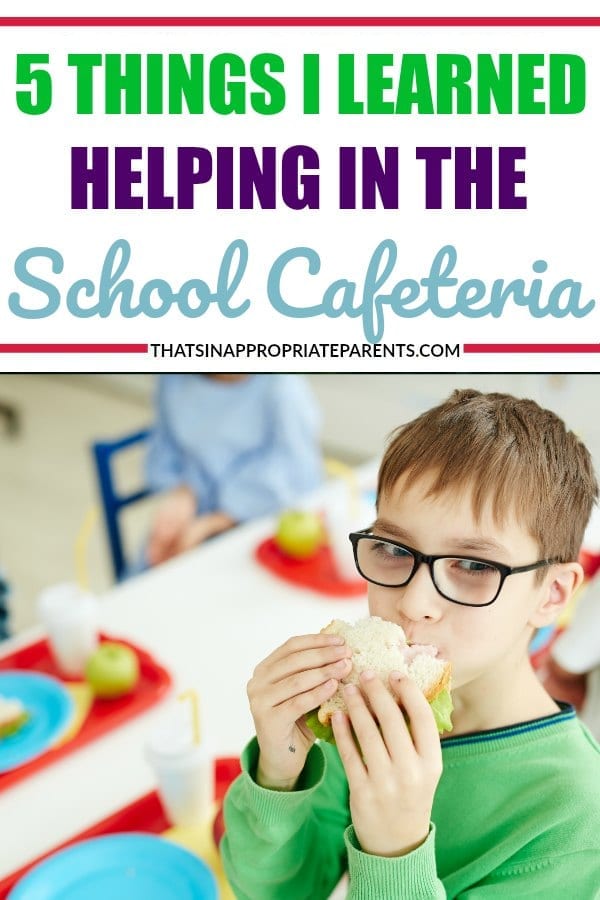 Luckily the apron with pockets stuffed with napkins and straws is the only ridiculous item you have to wear – no hair nets or gloves required. Usually yoga pants and junky gym shoes are your safest bet in here, especially when you step on a grape. Or cheese. Or jelly. But we’ll talk about that later.

Being out on the cafeteria floor is like a jungle, where you can get overwhelmed by the demands of dozens of wild, ketchup-faced 6-year-olds who have to go potty, need a napkin, spilled their yogurt or have to go potty again.

I kind of envy the parents who have never set foot in the lunch room– the parents who send their children to school thinking their kid is behaving beautifully, eating everything on their tray and cleaning up their area afterwards. I used to be you too – and it’s with sincere honesty and concern that I tell you, you are horribly mistaken.

Let me just say, your kid COULD be an exception to everything I’m detailing here, but trust me, he’s not.

So like it or not moms and dads, here are the top five things I’ve learned about your kids while volunteering at the school cafeteria.

NOBODY’s fruit is getting eaten.

Ok, maybe like one kid out of 20. But otherwise it’s true, all those delicious strawberries, blueberries, apples, all the freaking grapes you lovingly cut up and put in those partitioned containers… nope. Those healthy, antioxidant-packed fruits are going straight in the garbage can. And seriously with the raisins? Come on, those aren’t happening either and you know it.

Your kid is only eating the treats.

Some of your kids are literally running on the empty calories from a bag of Doritos and some ice cream they bought from the freezer at the end of the lunch line. I realize now this is why they are ravenous when they get off the bus. I’ve watched many kids devour ice cream while the food on their tray sits uneaten. I saw a kindergartner who only ate a pack of Scooby Doo fruit snacks the entire lunch period.

We could feed a small, starving village with what goes in the school cafeteria trash can.

The school recently implemented a “share table” this year, where kids can drop their unopened items for others to take, but I only ever see a few things actually make it to that table.

One time I watched a sixth grader with two uneaten oranges throw them in the trash can. I told him he needed to tell his mom that he didn’t like them, so she wouldn’t pack them. He looked at me like I had two heads.

Another child went through the lunch line with a tray he bought, then went straight to the trash can to dump everything except the Goldfish crackers. My own kid tried to pitch an uneaten banana once – that was milliseconds before he saw how fast his mom could sprint across the floor to bat it out of the trash can like a soccer goalie defending a World Cup title.

I could build a house out of all the unopened string cheeses, celery and carrot sticks – insulate it with PB&Js and then top it with a roof made of chicken patties. I could fill an Olympic-sized pool with the unopened water bottles, half drank pouches of Capri Suns and once-sipped Gatorades– all of which are repeatedly tossed out. 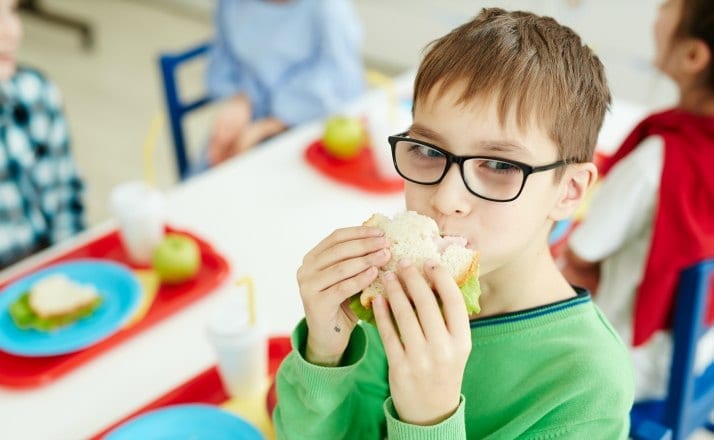 If your kid’s food isn’t in the trash, it’s all over the floor of the school cafeteria.

Seriously, there is a carpet of pretzels, crackers, raisins and unidentifiable chunks all over the place in here. If you pack your kid Jell-O or pudding, please include an apology note with it addressed to the volunteer who has to bend down and clean it off the floor because that crap doesn’t wipe up with a push broom.

Neither do the pull-back tab applesauce cups, y’all. Why don’t you just send a Honeycrisp and a meat mallet in their lunchbox? Same thing. While I’m thinking of it, we need to talk to the Gogurt people about the whole yogurt-squeezing-everywhere situation. It’s 2018. I feel like there’s an easier way to consume our probiotics. And please don’t get me started on the plastic straw wrappers from those juice boxes.

Your kid has no sense of appropriate volume level in the lunch room.

I thought the lunch lady was bonkers wearing a whistle around her neck like some wrestling referee. Nope, ownership of that whistle is the only controlled thing going on in here. It is her one hope to quell the roar of children who all get up simultaneously from 100 metal chairs running for recess. Your child is also spending at least 97 percent of his lunch period gabbing with the kid next to him, which is another reason why neither of them had any time to eat.

There are many children here who get financial assistance or help with lunch costs. I’m sure those families appreciate all that’s offered to them. I am sure parents here are teaching their kids about healthy foods and encouraging vegetable consumption– it’s for sure the most agonizing part of my dinner routine.

My guess is public school lunchrooms might mirror our lunchroom situation if we compared the two. Bottom line – they are kids, so their decision making and judgments (and manners) leave room for improvement no matter where they GO TO SCHOOL.

As parents, it’s probably not a bad idea to ask your kid about lunchtime in the school cafeteria.

Find out what they like to eat, what they didn’t like or threw away (or what they saw my kid throw away). Help them appreciate the value of food and how it fuels their bodies from morning reading class all the way to their last math class. Tell them to say please and thank you to people who help them and remind them about picking up after themselves, too.

In the end, it won’t matter though. We will keep coming. We will put the apron on and come home with sticky shoes and smell like fries and peaches. The school needs volunteers. It can’t run without them. But more importantly, it kind of feels good to help your kid out.

And it doesn’t hurt that your kid, whose face is probably covered in ketchup, is pretty cute too – even though he just spilled his applesauce all over the floor.

5 Things I Learned As A School Cafeteria Volunteer

Reporter Is Smacked On The But…


How to REALLY Know If You’re …