One of the most difficult parts of my marriage has been believing that my wife loves me. And this has nothing to do with her, and everything to do with me and my childhood.

When A Parent Abandons You As a Child, You’ll Always Wonder

My father left when I was young, and he only reached out when he met a new woman, or needed bail money. My mother is in her third marriage. My father died just after divorcing his fourth wife. I have a slew of stepparents, stepsiblings, half siblings, stepcousins and stepuncles that were once family, but now, I don’t know what they are.

I once tried to introduce my former stepsister to my wife through Facebook, but didn’t know what to call her, and recall finding it strange to have worn a boutonniere in her wedding line, and now not to have a title for our relationship.

And I’ll just say it: My parents had an ugly divorce.

It thrust me from one home to another, and forced me to take sides when I wanted unity. I ran away from home when I was 14, and eventually moved in with my grandmother. When she died just after my 21st birthday. I’d never felt so alone.

All of it made family feel temporary. It caused me to put my guard up, and assume that people come and go, and if I were to protect myself, I was going to need to not get too close.

But the worst part of it all is that I often wonder if Mel will leave like so many others have in the past, because frankly, until I met her, it was all I’d ever known. 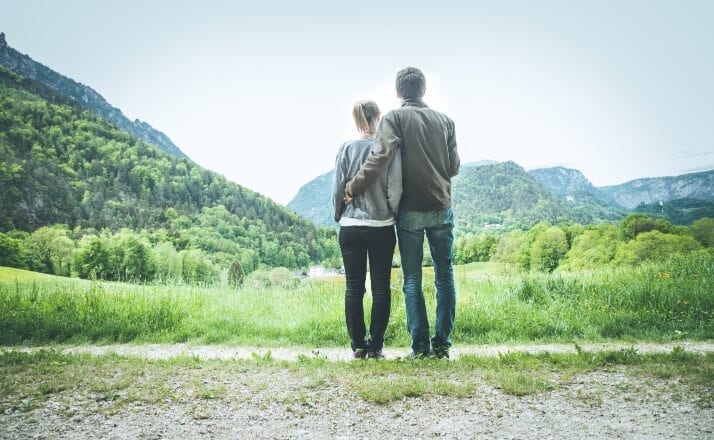 None of this is Mel’s fault, mind you, but it has caused us to go 15 years together and I cannot recall a day that I didn’t tell her that I love her. And when I say that out loud, it seems sweet.

And you know what, I do think my wife appreciates it. But at the same time, it is all on the heels of this troubled childhood, and I honestly don’t know what to make of that.

I don’t know if this means that my need to express my love for her is rooted in fear rather than pure love. Or perhaps I’m just over thinking it, which I will admit, I often do.

I was actually discussing how often I tell my wife that I love her with an old friend the other day, and he mentioned that his mother died when he was young.

It has caused him to go on extravagant trips and dates with her because he knows how short life can sometimes be. There was a group of us around a campfire that night. Some of the men looked at him strangely, but I didn’t. I knew exactly what he was talking about.

It really is eye opening how much our past can influence our present.

But I must admit, on the logical end of things, I know that Mel loves me. And I also know that Mel is the best thing to happen in my life.

As a child I’d often look at happy families, and wonder what made them so special. I wondered why their family so functional, while my grandmother was raising me. But now, with Mel, it feels like I’m getting that happy family I always wanted as a child, only I’m the other side of it.

I’m experiencing it as a father rather than a child. And perhaps that’s why I’m so eager to see it last, because I know the value of what I’m experiencing.

I also know how fragile a family unit can be, because I’ve seen it fall apart.

But a lot of me telling Mel that I love her is rooted in this deep need I have for her to respond in kind. It’s almost like I require a daily reminder that she still loves me.

And yes, all of this probably makes me needy or dependent or somewhere between the two, but ultimately, this is why those suffering with mental illness and family tragedy don’t openly discuss their uncertainties and anxieties around love, fear, and abandonment, because it’s often misunderstood. And it’s also why we are often reserved and fearful of commitment.

I must say, though, during those 5,475 daily I love you’s Mel and I have shared, she’s never failed to say it back.

And on a lot of days, she beats me to it. When I think about that, I feel so secure with her. I feel like I’m someone who deserves to be loved. And if you know anything about living in the shadow of a broken family, that’s pretty huge.